Terrain Race has called the Richmond Raceway home for the past several years. This year they returned once again for one of central Virginia's only obstacle course races. The race was held on October 5th, which turned out to be a beautiful fall day. While the race has been at this venue before, this was the first event here since the race fell under new ownership. This version of Terrain Race was very familiar but did have some noticeable changes.

The land surrounding the Richmond Raceway is plenty large enough to host a race, especially a 5k race. There are many possible entrances to the venue, but once you find the open gate parking is pretty quick and easy. The parking area was conveniently located right next to the festival area. The parking price of $20 is steep, even for an OCR. At the entrance there were a few tents set up to pick up your bib on race day, but for a $5 fee. To avoid the fee you had to pick up your bib the previous day at a local sporting goods store. They claim it helps to reduce wait times on race day, and it may be effective for that, but it still feels like a bit of a money-grab, especially after paying so much to park. 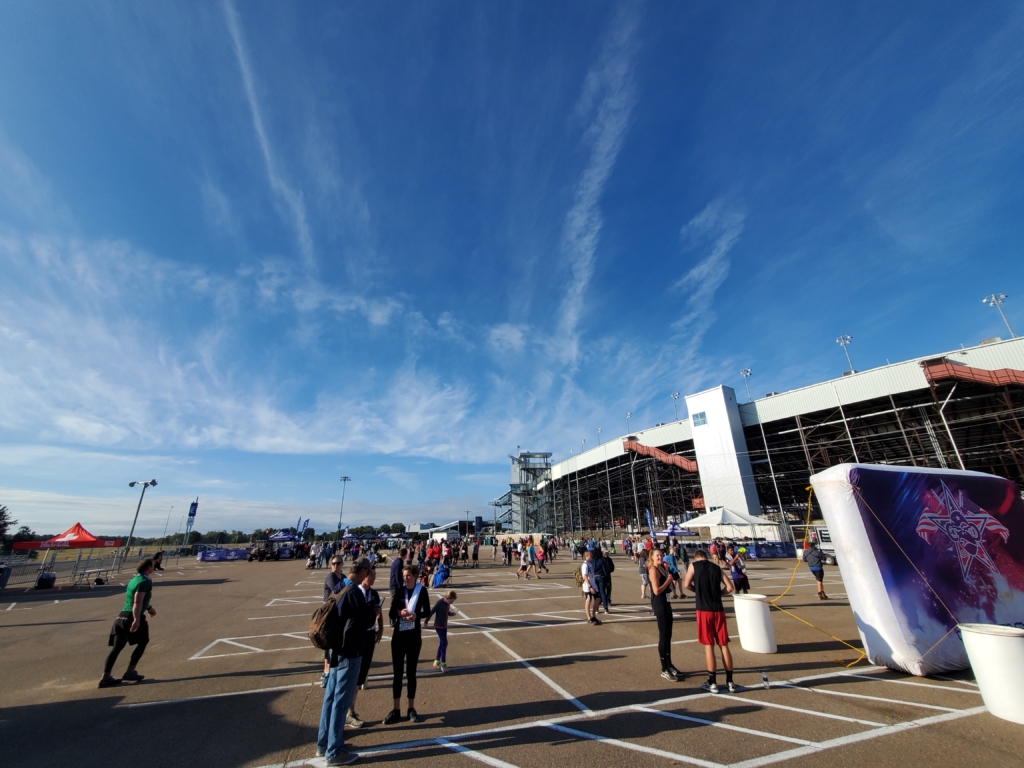 The festival area was large and accommodating.

Since the event is held at the raceway I would really like to see them incorporate the raceway itself. Obstacle races can be successful even if the race is off the trails. For evidence, you can look to the Spartan Race Stadion races and the Bonefrog Talledega Raceway event. I think it's a big missed opportunity to not utilize the raceway itself. Especially since the actual course isn't particularly exciting. There are a few very gradual hills, but the race is mostly in flat open fields. A good portion of the course is on asphalt and gravel access roads. 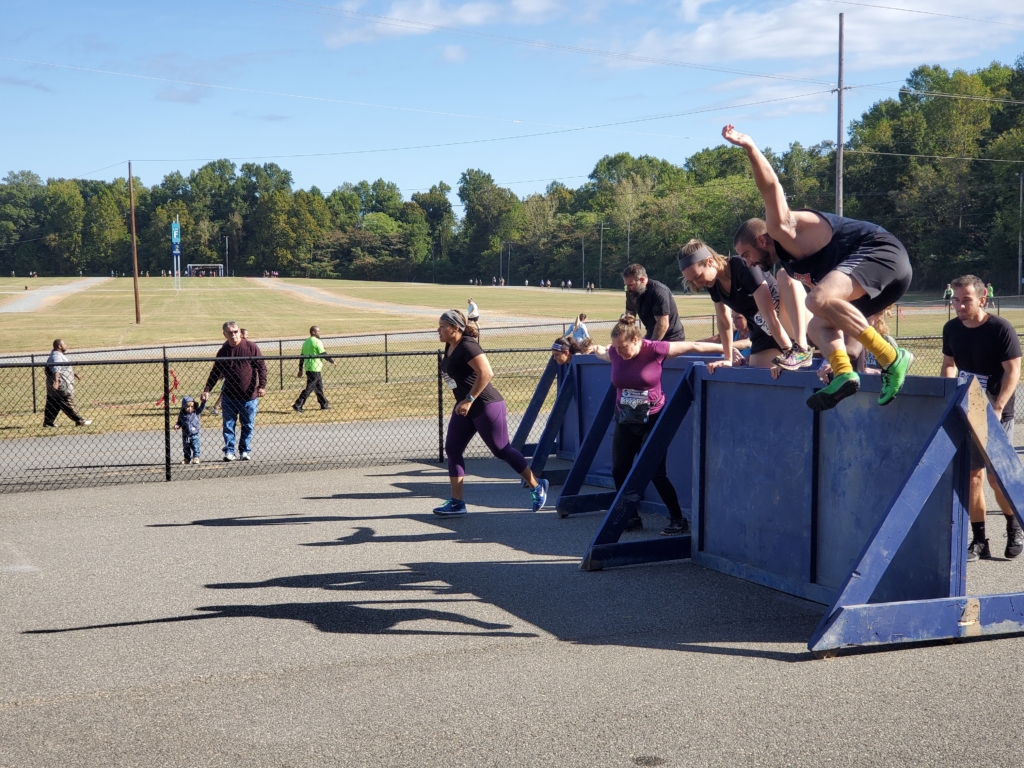 A set of short walls was the first obstacle.

There was a little bit of mud and water on the course. A few shallow trenches were dug out and filled with water. These sections were pretty short and shallow, but it was a nice addition to break up the otherwise dry course. The water was shin-knee deep and there were no large mud mounds to climb. Most of the race finishers were about as clean as when they started.

The first thing anyone familiar with Terrain Race would have noticed was that there were no water tanks at the start line. Not everyone was a fan of the tanks, but regardless of your opinion on the matter, it was something that made Terrain Race stand out. 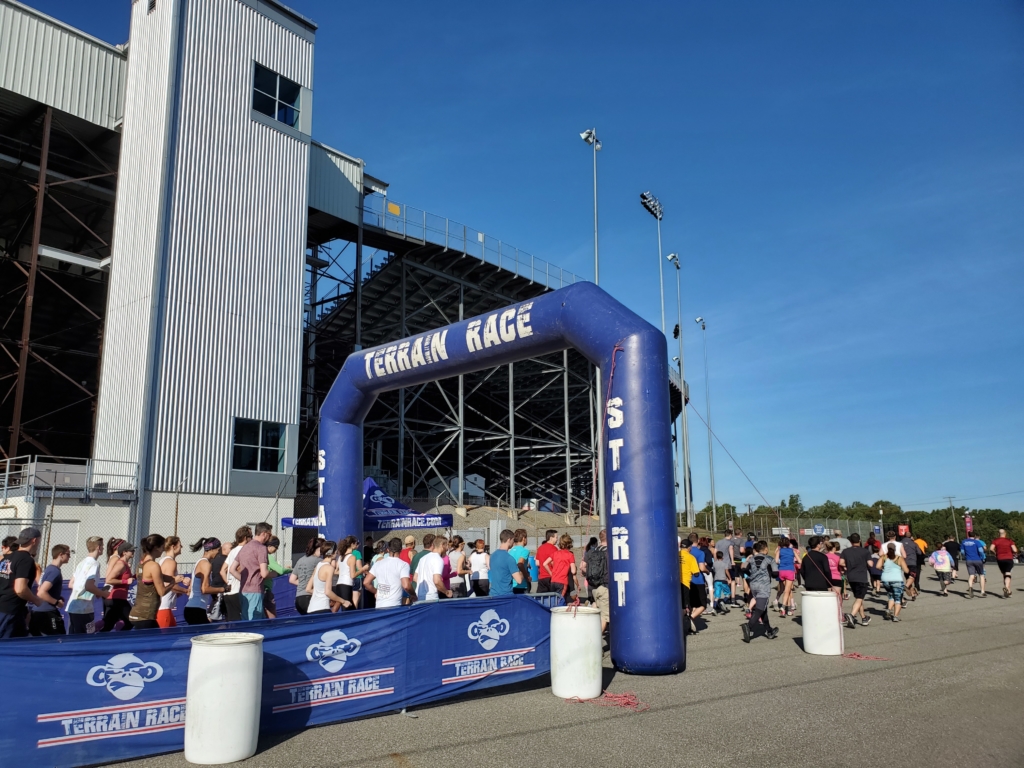 Large waves were sent off adjacent to the under-utilized raceway

Most of the obstacles were pretty standard OCR staples: Tire Flip, Rope Climb, Mud, Tractor Pull, Cargo Net Climb, Monkey Bars, a Rig, and a few walls/hurdles to jump over. Interestingly, the Monkey bars were no longer angled and were not over water, which was another Terrain Race trademark. One obstacle that stood out was Tarzan. This obstacle requires you to travel from several hanging ropes, one after the other. This obstacle was challenging due to the spacing between the ropes. Maintaining momentum is critical for the completion of this obstacle; the ropes are simply too far apart to just reach out and grab. It was nice to see something a little more unique and challenging on the course. 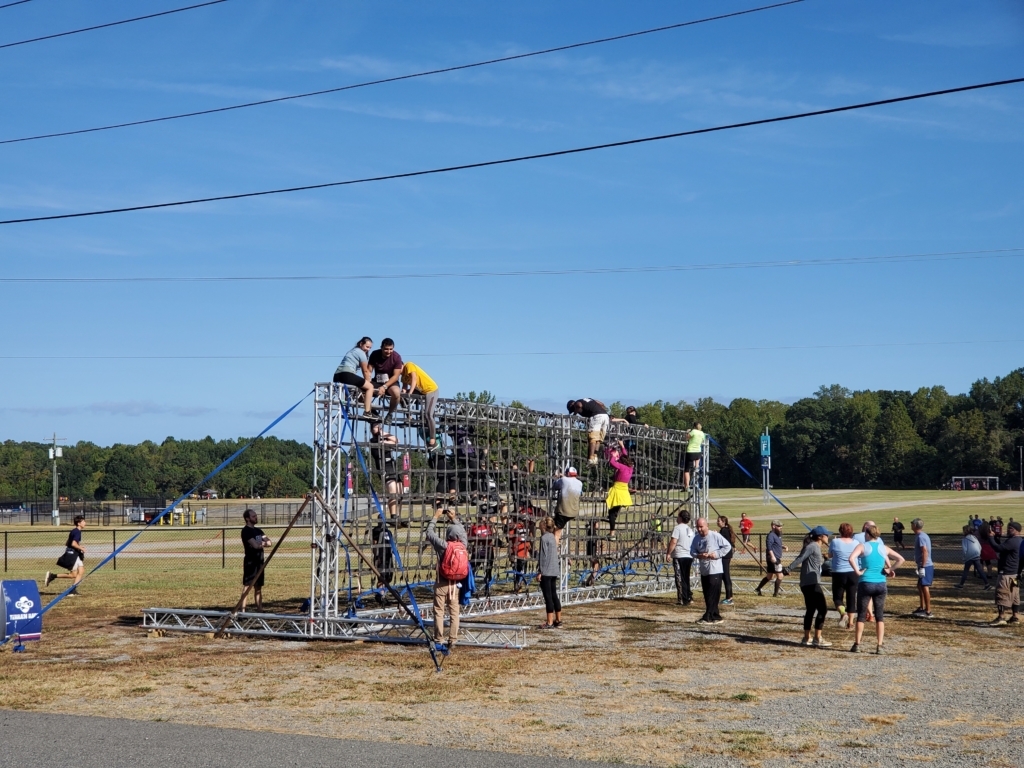 The cargo net was the final obstacle in this 5k event

The rig was also well designed. First, There was an angled pipe to ascend. At the top of the pipe you were met with varying hand grips to finish the rig. The grips alternated between rings, ball grips, and a horizontal bar. The grip layout would have been pretty easy for many seasoned racers but did provide a challenge for new racers.

To an experienced racer, this race probably sounds pretty lackluster, and it would be hard to argue with that conclusion. However, everything about this course that might seem uninteresting to an experienced racer is exactly what makes it the perfect race for a beginner. The course is mostly flat, the obstacles mostly doable, the distance is not too long, and it had a very relaxed and welcoming atmosphere. Spectators are free, so it would be easy to convince friends and family to come along and cheer you on as you try something new. If the sport is to continue to grow there needs to be a way to bring in new people who might otherwise be too intimidated to try it.

Experienced racers could still have a good time by racing this race all out; to try to push their own limits. They could also bring a group of new racers to the event to show them the ropes (pun intended!). While it might not be a glamours championship event, I think ultimately the race is what you make it and I think running this Terrain Race is definitely worth the time and effort.