Spartan Race returned to Infinity Downs Farm on 10/26/2019 for the annual Spartan Super in Virginia. Infinity downs is a secluded and beautiful property located at the eastern edge of the Blue Ridge Mountains. Due to its location, the venue has plenty to offer obstacle racing enthusiasts.

The venue is in a convenient location and getting to the race itself is a breeze. Parking is also not a terrible problem for this venue as there is ample parking immediately adjacent to the festival area. If you had to park at the far end of the lot you would have to walk for a few minutes to make it to the festival area, but it’s nothing excessive. The speed and ease with which you can find a parking spot makes up for that minor inconvenience.

There is no doubt that this is a beautiful venue for an OCR event.

The race itself was a fairly typical Spartan Super. The distance reported by Spartan was 8.6 miles with an elevation change of about 1200 feet. The elevation change, or lack thereof, is probably the most striking aspect of this race. Given that the venue sits neatly between several substantial mountain peaks, the actual course itself is remarkably flat. There were definitely some uphill and downhill portions of the course, but most of these were gradual. Many people gravitate towards mountain races for the added challenge a steep incline can provide, but there is something to be said for a nice, gentle course. It really allows racers the ability to enjoy the running portion of the race without having to suffer the entire time. This is especially true if you’re already not a strong runner.

The first half of this race was spent mostly on the trails. The trails were all wide and well marked. This allowed passing freely with little to no bottlenecks. There weren’t many obstacles for the first 5 miles of the race. Of those obstacles, there weren’t many of the typical burpee-generating obstacles. The exceptions would be Twister, The Box, and Olympus.

After mile 5 is where things got really interesting. The race quickly changed from a peaceful trail run to an anaerobic obstacle gauntlet. Racers first encountered the Hurdles. Immediately after were the Sandbag Carry, Hercules Hoist, A-Frame Cargo Net, Atlas Carry, Bucket Carry, Rope Climb, 6” Wall, Multi-rig, and the Z Walls. All of these obstacles were within about a  mile of each other. After you completed one obstacle there was only a very brief jog before you’d encounter the next obstacle. This close obstacle density, combined with the previous miles covered in the first portion of the race caused many racers to begin having issues with cramping for the last few miles. 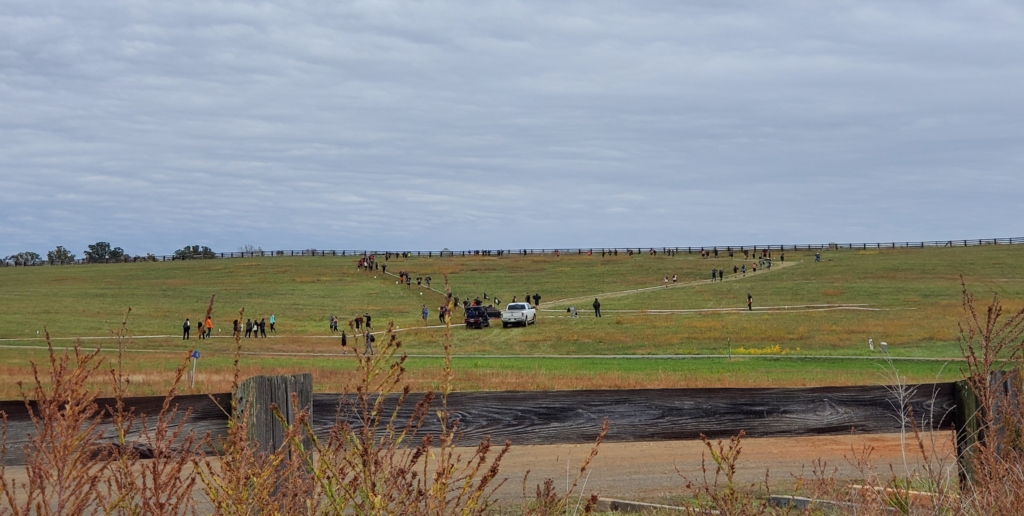 It's longer than it looks! Spartan estimated this loop as being almost a quarter of a mile.

Luckily, the remainder of the race wasn’t overly demanding. There were a few obstacles like the Spearman, Monkey Bars and the Vertical Cargo Net that could generate some burpees, but for most racers, the worst was behind them at this point. The race concluded with the Barbed Wire Crawl and then a short uphill run to the Fire Jump.

Spartan decided to change things up and Olympus got a makeover. This new version of Olympus has been making appearances in recent races and has many racers confused. Not only does the incline seem a little steeper but the surface is no longer wood; A slick, synthetic material now covers the walls. Any small amount of moisture renders even the grippiest of shoes ineffective. There was a significant increase in the failure rate of this already failure-prone obstacle. It would appear to defeat Olympus you now have to traverse it on your knees or by solely using your upper body. Increasing the difficulty of obstacles that are already a challenge for the casual racer seems like a questionable decision. 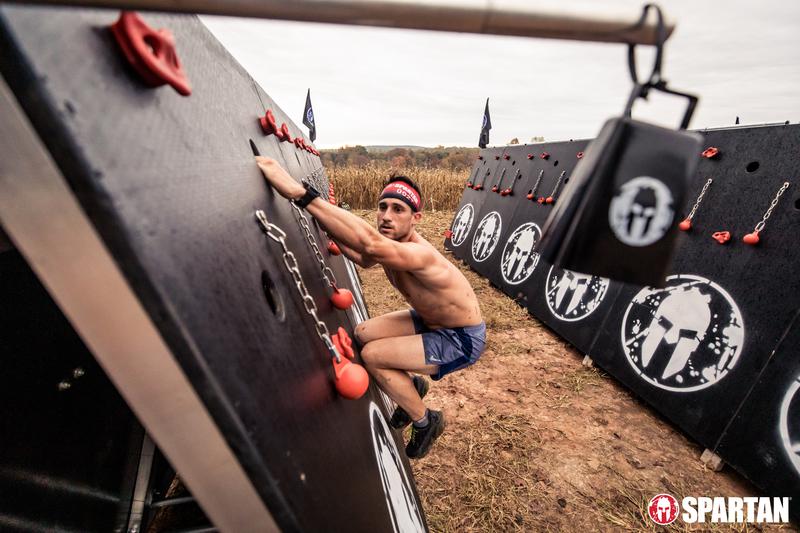 A picture from Spartan showing a glimpse of the new material and an elite athlete needing to use his knees to make it across the wall.

Both the Bucket Carry and Sandbag Carry were nice long loops. The loops weren’t overly steep, though they both did have an uphill and downhill portion. I think that the lack of elevation change made these obstacles seem easier than they were. I feel that the gradual slopes combined with the length of the loop drained racer’s energy more than they realized while they were actually finishing the obstacle, contributing to the cramps many racers faced later in the race.

The new and “improved” Vertical Cargo Net made yet another appearance. For racers that lack some upper body strength or jumping ability found this obstacle impossible to complete without assistance. Racers were still wet and muddy from the Dunk wall, which amplified the difficulty of this obstacle. This obstacle has been promoted from something almost everyone could easily complete to something that most people will struggle to complete. 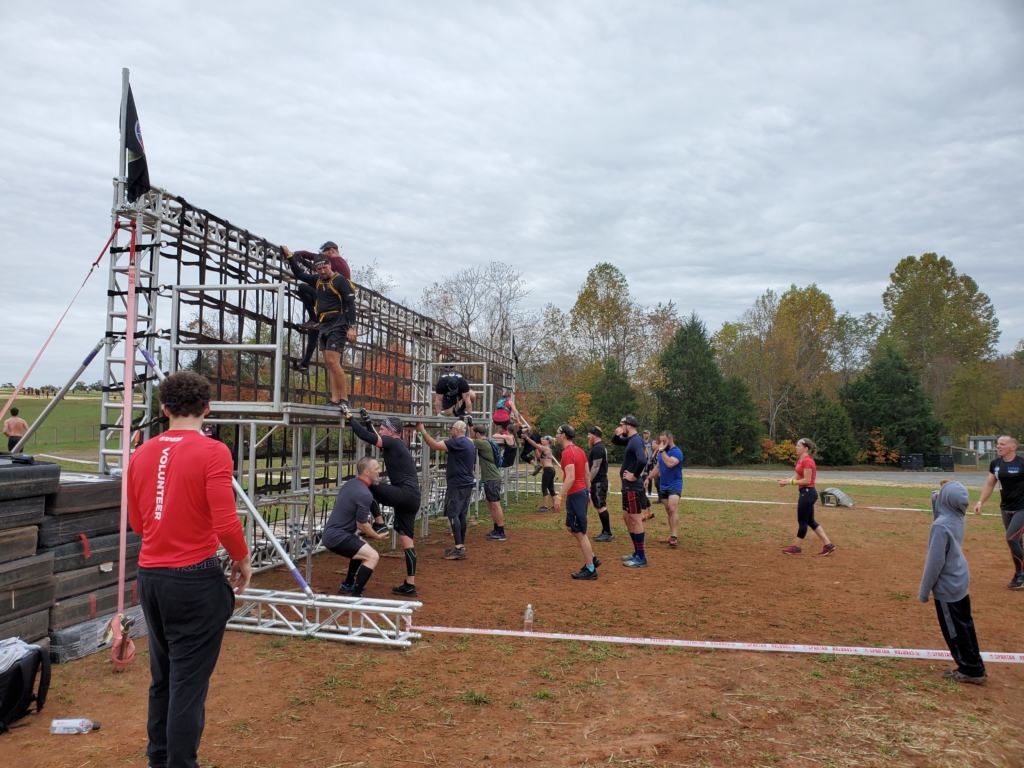 The Virginia Super cannot brag about any outrageous elevation changes, freezing cold swims, or shoe-stealing mud pits. And there is a time and a place for unique challenges, but sometimes you just want a good course you can have fun with. This course is tough enough to challenge experienced athletes but is also forgiving enough to be an excellent choice for a first-time racer. 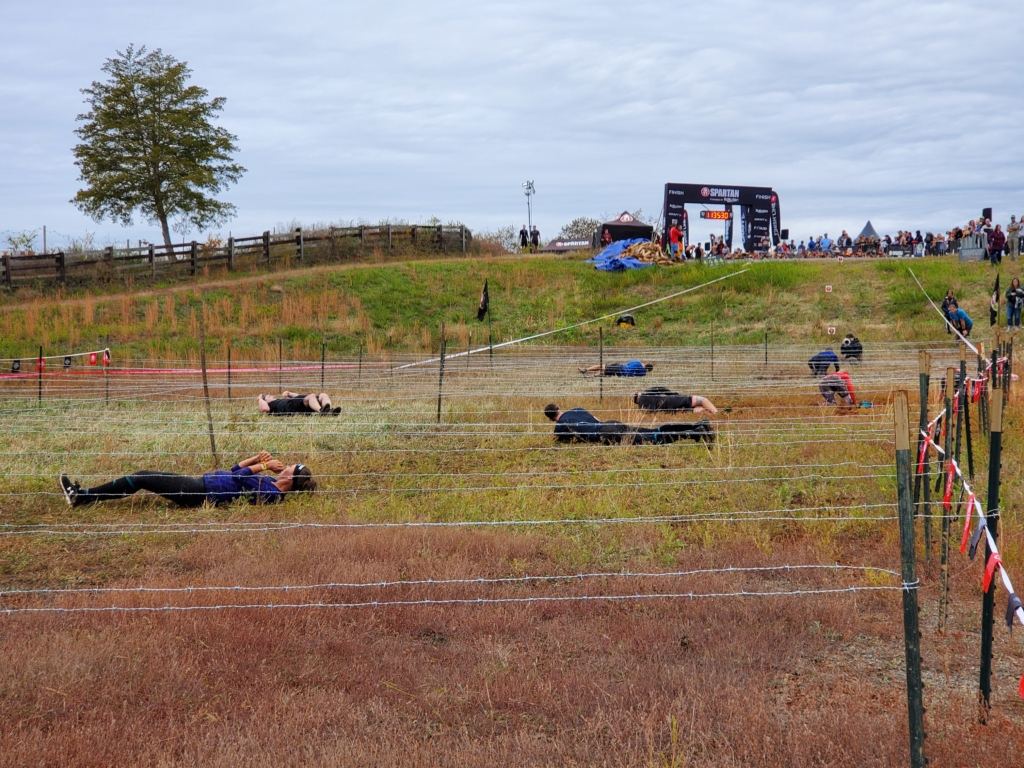 This author is part of the Mud Run Crew and received a free race entry in return for an independent review. All opinions are those of the author and were not influenced by the race sponsor or Mud Run Guide.
By Ron Williamson|2019-11-04T16:20:48-05:00November 5th, 2019|Race Recap|0 Comments