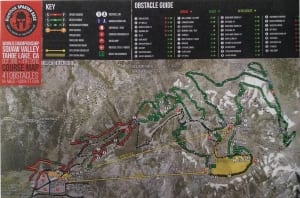 A few weeks back, a few “industry insiders” hopped on a Google Hangout to discuss who we thought would be the top 5 for Men & Women. Jake Shillue, Steffen Cook, Keith Allen, Tony Matesi and I (Brett) had the great pleasure of butting heads for about an hour picking our top 5 guys and gals who would dominate the 2015 Spartan Race World Championship in Lake Tahoe. All in all, we had a general consensus of who we expected to be on the podium, although each of us had a different order. Since we all agreed not to share each other's exact order, I'll give the top 5 we picked in no particular order:
Men

We reached out to a bunch of athletes and insiders, and while some are a little too busy with their pre-race prep, here are some of the insights we received so far and we'll be fielding updates all day:
Brakken Kraker:
Guys: “I'm not giving out the exact order, but here's the 4 of the top 5 that I feel are a lock: Cody Moat, Ryan Atkins, Jon Albon, Robert Killian. There are about eight other guys who can possibly snag that open 5th spot.”
Gals: “Similar with the women, I can give you 10, but here's 5: Amelia, Rose, Lindsey, Claude, and Becca. Becca Clifford is a new name you'll be hearing more from, and she's also from my hometown!”

Men: “I'm sure I'm forgetting some, it's a stacked field. Cody and Ryan are my top picks. Brakken (if healthy), Isaiah, and Ryan Kent will be in the mix. If Jon can overcome altitude, he will be standing on the podium. Unfortunately, John Yatsko will be here watching with his foot in a boot due to Achilles issues.”
Women: “I have a horse in this race, so obviously I'm picking Rose, Amelia, Lindsay, Claude…in no order. Becca, Chikorita, and Corinna could be in that mix, too.”

Facebook Coverage
Select from the #roadtotahoe or #spartanWC2015 Facebook hashtags below for up to the minute reports coming out of Lake Tahoe!