We're live on course throughout the weekend. Our tagboard at the bottom of this page will pull in all the updates, but if you want it straight from the source, be sure to tune in on Twitter (@mudrunguide), Instagram (@mudrunguide), and Facebook (@mudrunguide).

Course Walk-Through: The Mud Run Guide Crew will share all the video info they are permitted from the course, including walk-through, obstacle construction, maybe even demo a few of the WTM obstacles ourselves! Coming Friday 11/13

Mudders To Watch Out For: Our Editor-in-Chief Margaret Schlachter puts together her list of men & women athletes to keep your eye on, and what teams have the best chance to claim the $100,000 prize for 100 miles (20 laps!) in 24 hours. We spoke with a few people in the Tough Mudder Community about their predictions, Tough Mudder HQ sent us these athletes to watch.

The top women and men to keep an eye out for this year are returning champions Ryan Atkins, Junyong Pak, Deanna Blegg and Amelia Boone. Ryan Atkins is participating as part of a team this year, so that will be interesting to watch and will be sure to rev up the competition. His team is going after the $100k prize, and he completed 95 miles alone last year, so this year we know they're aiming to hit 100 miles together as a team.

We should also expect new athletes from across the OCR world to be in attendance this year for a chance to earn a top prize, as well as new teams going after the $100k prize for the first time. Additionally some of last year's top 5 men and women will be returning to compete and hold their title.

We also spoke with WTM Community Leader Ken Jacobus. He gave us the inside scoop on who he thinks we should be looking out for this year at WTM.

“In no particular order here are some of the athletes to watch other than the favorites, Tim Kacprzak, Anthony Tadajewski (finished 5th last year), Del LeViere, Joey Patrolia, Greg Armstrong, Scott Brown, Fischer Lumis, Matt Hanson is back this year after pneumoinia last year, and Daniel Kaali from Hungary. Finally, Jacky Boisset, he is an adventure racer from France who just finished a team bike race in China on Tuesday.

In the women's race other than the obvious favorites Kristy McBride is back after having a baby last year, Corinna Coffin, Amanda Steidle, Heather Heaton, Anna-Lee Markstedt O'Dwyer (from Sweden), Renate Kaufman, Lauren Andrews, Heather Clapacs, and Mandy Baskin.

In the team race, look for the Germans on Team Getting Tough, Lion's Pride of Vegas, and Team Bacon Grease (a new team but all Tough Mudder veterans). The Danish Team Valhalla rising is looking to improve on their third place finish from last year as well.

“Real-Time” results, photos, video, interviews from the pit crews, and hopefully even a live stream from The Cliff!

Check the tagboard at the bottom of the page for real-time updates from social media networks – tag your Facebook, Instagram, or Twitter posts w/video & photos with official hashtag: #WTM2015

Tough Mudder is live streaming from the event. 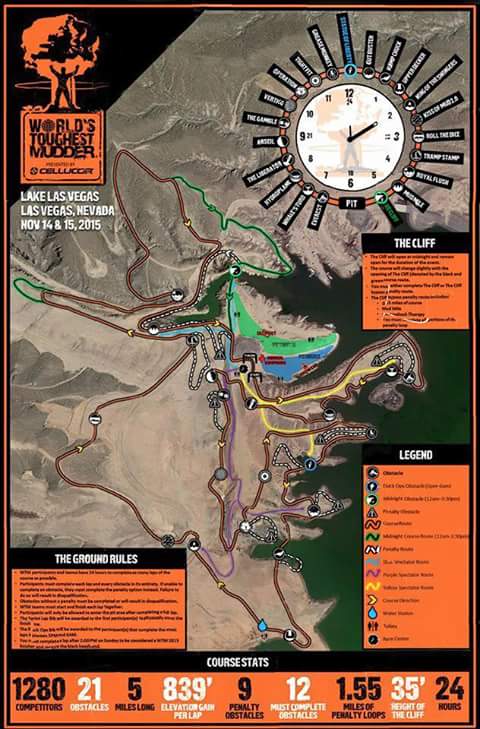 World’s Toughest Mudder® is the culminating event of the Tough Mudder® global calendar, and takes the concept of being a Tough Mudder to a whole new level. Designed to push Mudders℠ to their physical and mental limits, this extreme competition puts the world’s most hardcore Mudders through a grueling 24-hour obstacle challenge with double the obstacles per mile of any other Tough Mudder event.

Unlike any other Tough Mudder event, World’s Toughest Mudder is a competition, with three official categories designed to find the toughest man, woman, and 4+ person team on the planet, plus cash prizes and other awards up for grabs, including an award for the largest World's Toughest Mudder team.

Located 35 minutes away from the Las Vegas Strip (the event’s first major obstacle is leaving the partying until afterwards), and just 30 minutes from Las Vegas' McCarran International Airport (LAS), Lake Las Vegas is an ideal venue for the 2015 World’s Toughest Mudder. The site contains several hundred acres of rolling desert landscape and runs alongside a massive freshwater lake. Several natural terrain features and use of the lake will be incorporated into the WTM course design. Temperatures are also expected to fluctuate significantly between day and night.

Race Begins 2:00:00pm Saturday, November 14th, 2015 and Ends 2:00:00pm Sunday
Participants will have (1) additional hour to complete their last lap on Sunday
Last Lap Rule Change: All participants intending to earn the official Black 24hr headband must complete a “Final Lap” after 1:00:00pm on Sunday to be eligible for the 24hrs of WTM. 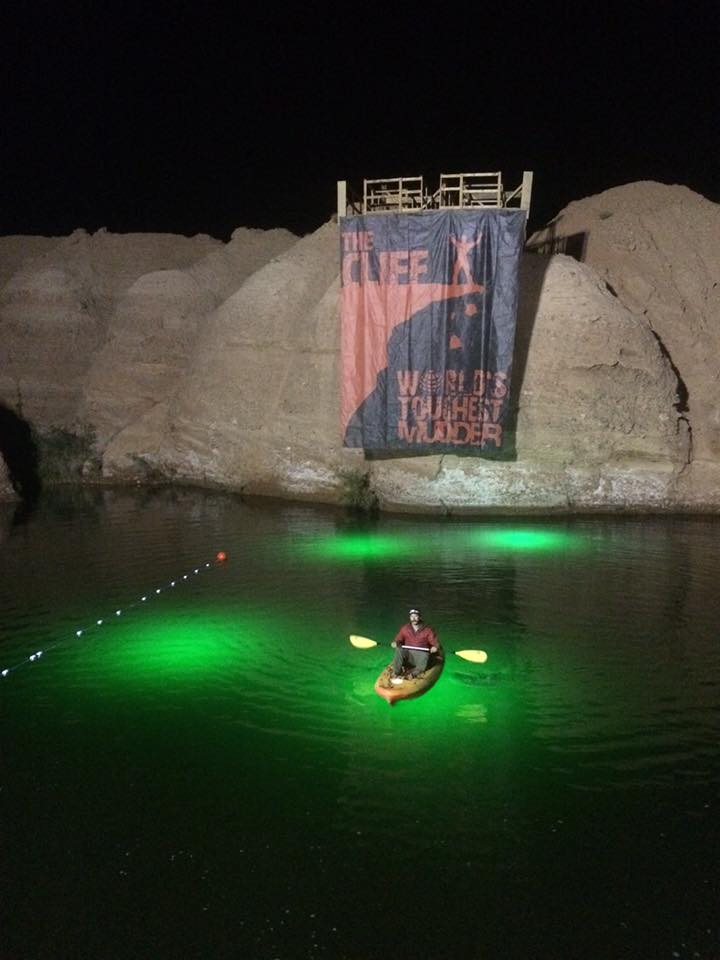 Special awards are given to those achieving the following:

BLACK OPS — For the most laps completed between sunset and sunrise. Only laps started after sunset and completed before sunrise will count towards winning the “Black Ops” award. Regular WTM lap completion rules apply. Nighttime rules apply.
Awarded — Free Entry to a Tough Mudder
Awarded — The Black WTM Bib

One-of-a-kind recognitions of some of the amazing feats that happen during WTM, including:

Live coverage will resume next year.