Back From The Dead: The Zombie Run Saves Run For Your Lives

UPDATE: 11/6/13: Human Movement has completed the absorption of Run For Your Lives, and has rebranded the event The Zombie Run Extreme. Remaining Run For Your Lives event registrations (TX and FL) will be honored!  Read more here.

There's a very long list of Do's and Don'ts when it comes to putting on any type of event – whether it's a bachelor party, a bar mitzvah, or a race. Securing the first three spots in the Absolutely DO NOT DO category are:

A couple days before Run For Your Lives was scheduled to take place in (some little town you need an updated GPS to find) Arizona, Run For Your Lives broke rule #1 and by all accounts, #2 as well. Over 2200 zombies and runners signed up and paid to take part in this event, some even coughing up over $100 for entry – only to be greeted by a “We're sorry but…” email less than 72 hours before the event. When the email says “Contact your bank for a refund…” they are essentially saying “We're not refunding your money, so good luck trying to get it back from your bank.” They broke rule #3 too, but we'll get to that in a minute; let's start with some positive stuff first: 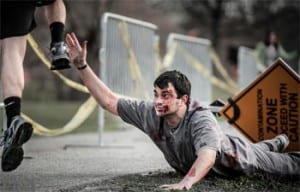 Human Movement isn't exactly a well-known name outside of the race community; a group that got its start in triathlon in the southwest and eventually re-located to Colorado, where they currently run some of the biggest names in racing. The Color Run, Foam Fest, Dirty Girl, and some world-class triathlons are what they are known for, and those brands are a household name if you're into fun, first-class events. (Notice, I used “class” twice in the last sentence, that was intended.) On Wednesday, October 30, Jeff Suffolk was thinking about what Halloween costume he could whip up for Thursday's festivities (actually, he was planing a Dirty Girl event) when he got a call that Run For Your Lives had closed their doors and were stranding a couple thousand runners without a zombie race – and most likely without refunds. Now, Jeff is no superhero – just a guy who loves the racing community, and there's no way he was going to let this stuff go down on his watch. As a former race director in Phoenix, no zombie race was gonna curl up and die in his old hood if he had something to say about it. With Mike Brennan's help (check out Mike's cameo in the video), and the rest of the team pitching in 110%, they ordered 3000 T-shirts, made sure all the permits were in-place (except for the beer permit that was never filed for by RFYL), and called in every favor they could. Jerry Foreman from Terrain Racing offered some amazing obstacles and his help. There wasn't enough time to set up the former, but the latter was invaluable. Several other members of the AZ tri and racing community pitched in to provide everything from the start gate snow fence to cases upon cases of water… all with nearly zero time and absolutely zero pay. You see – Human Movement did this all out of their OWN pockets; Run For Your Lives was paid for the 2200 registrants – not them. In the 24 hours that Eventbrite re-activated registration, the positive news of the takeover even generated nearly 100 new registrations – quite a turnaround from an event that was getting (by RFYL's own admission) death threats just hours earlier.

It Gets Worse Before it Gets Better

Once the crew touched ground in AZ and drove 45 minutes to the desolate venue (Editor's Note: Who chose this location anyway?), they found the lone Run For Your Lives trailer on-site; when they opened it up, they were positive that this event was left for dead. A smattering of pieces for apparent obstacles that in no way resembled what Run For Your Lives showed on their (now deactivated) website. Missing were the cargo nets, walls, or any contraption that made RFYL an actual “obstacle course” and were shown so prominently in their website's slick video trailer. According to a former RFYL employee: “We haven't had any of that stuff for nearly 2 years.” Of the dozen obstacles in the trailer, many were missing parts or just plain lame. With no time to build, rent or even borrow others at this point, Jeff and his team needed to figure out a course that utilized some sort of challenging terrain to make it interesting. Unfortunately, they were in a shorn corn field with an aqueduct zig-zagging through it. Period. Since all the corn was harvested, Arizona's harsh, dry climate had turned the ground into dust, and the entire “course” was nothing but a dry, flat, wasteland with no shade and plenty of eye-burning, throat-clogging dust. Why RFYL would chose to bring a course to this particular patch of nothingness (no offense to the Gila River Indian community, but we all know you have many, many, more beautiful venues… including the one right up the road where Terrain Mud Run was the week before) is beyond the imagination of everyone who showed up to become a zombie or attempt to evade them.

I mentioned earlier that the team at Human Movement are, well, human, and not superheroes; but I never said they weren't magicians. They took the crappy obstacles, wasteland of a course, and total absence of mud run staples (DJ, beer, mud, beer, actual obstacles, and… beer) and pulled off a worthy event for nearly 1500 racers. (Note: We can only assume that the other 700+ registered runners got lost on the way to the venue trying to follow their GPS. My iPhone's map originally deposited my Jeep 20 or so miles to the north in the middle of the Indian Reservation. To say this venue was off the beaten path would imply that there actually was a path to it.) With a borrowed PA system, an iPod and a couple microphones, Jeff and Mike kept the crowd entertained and pumped up between waves.

The Vibe: Apathy Turns to Empathy to Excitement 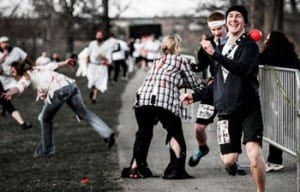 Play out this scenario: You ponied up $100 to participate in an event and 72 hours before you were set to race, you get an email that pulls the plug. Less than an hour later, there's some rumination that the race has been saved, but you still have no idea if that means you're getting your money back or racing. As the details begin to emerge (shout-out to Matt B. Davis and ORM for their exclusive coverage) they are still a little murky as Human Movement was showing up on RFYL's Facebook page, and runforyourlives.com was now inaccessible. Details are sketchy; should you trust that there's even an event on Saturday morning? Who do you email or call to make sure? Human Movement's team is en-route to AZ and RFYL is AWOL. So, let me ask – how would YOU feel right about now?

When the first racers (finally) found the location and drove into the parking lot, they nearly ran over Jerry from Terrain Racing due to a little anger and desperation. As a line started to form at the information tent, it was evident that there were some racers who were just about at the boiling point – they wanted someone to blame and wanted answers. The grumblings and WTF's beneath their breath as they signed The Zombie Run waivers immediately gave way to the only thing that can slay the dragon of anger and building resentment – a smile. Actually, a group of smiles. No matter how hard HM and Eventbrite had worked for 60+ hours to bring this event even remotely up to snuff (Another note: The production quality of ANY HM event is far higher than what they were able to pull off in AZ) they still lined up to greet racers with a smile and get them the answers they needed, provide their bib numbers, belts, zombie makeup, t-shirt, and even a hug or two (OK, I made up that last part). The bottom line was the racers had already given up on receiving a decent outcome, so what they got from HM was above and beyond their expectations. That's a win for any event, especially the crapshoot that this one was.

Now, get this: One question kept coming up at the information booth:

“Where can we make a donation to Human Movement for putting this on?”

Seriously? Even after they were “fleeced” by one race company, many runners were asking to put up even MORE money to help out – priceless. (I love this community!)

Making it Out Alive

Registration went smoothly, heats started ON TIME right at 8am, and the only lines to be found were for zombie makeup. Seriously, there were a LOT of zombies in line – and out on the course. I ran the course a couple different times, and at nearly every point, there were more zombies converging on groups of runners than I could count. Any runners that “survived” with one flag were extremely lucky, if they made it to the finish with two I have no doubt they were cheating. If they had THREE then they didn't even run the course. With the limited obstacles provided in the black hole of a RFYL trailer, the course was sparse. Due to the location, the course was flat. Both of these aspects align for a zombie flesh-feast, and very few (cheaters) survived the first 3 miles of the course. The last .1 was no man's land – as in no man (or woman) lived through it. A dozen zombies lined the chute, and some of them even ran with you all the way under the finish gate. Even if you didn't have any flags left (ahem, I didn't) you still felt like you “survived” just to get through the gauntlet and on to the beer. Oh – wait, RFYL screwed the pooch on the beer permit, so there was none of that.

Enough Butt-Kissing, We Know Human Movement Pulled it Off

Yeah, you saw the title. Enough ego-stroking, even though this is a FIRST in the race industry as I know it; One race stepped in and put on a race OUT OF THEIR OWN POCKETS when another disappeared with the registration cash. Mad props to Human Movement. If you want to see them succeed, then register for RFYL in Austin or Orlando, Hit a Dirty Girl series, The Ugly Sweater Run, The Color Run, or one of the other great events from Human Movement. Check out our Race Discounts page for more info and save a few bucks!

They sent me (Brett) out to have some fun on the course, here's what I came up with along the way: