This race marked the start of my 2014 season and the start of my personal pursuit of finishing in top 50 internationally in elite season points at the end of the year. It was meant to be a “fun” race for me, a chance to brush off the cobwebs of not racing since November and a chance to share the Spartan Race experience for the first time with my girlfriend’s family and friends who reside in South of the venue.

The logistics of the weekend were pretty crazy, there was no way for me to leave work early Friday which meant we’d be driving through the night, toeing the start line early in the morning, and spending the day in sun visiting and watching the kid’s race (My girlfriend’s little brother joined the Spartan family. AROOO!) before finally catching a little rest and doing the course again on Sunday for round 2 and heading immediately back on the road to Indiana. 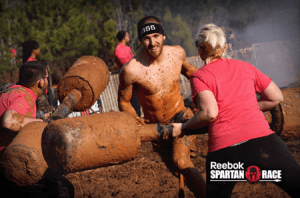 Saturday morning we arrived at the venue and were met with a light fog and brisk temperatures. It was a toss-up between being cold enough to justify a shirt or not but I decided it ultimately wouldn’t be worth the added weight once caked in the red clay. I took the starting coral and anxiously awaited our cue to set off on the course. AROO! AROO! AROOO! GOOOOOOO! And we were off – but not for long because about 100 yards in we were presented with some short hurdles with shallow water on the opposite side (think steeplechase). From that point out it was the typically Spartan affair, although flatter than usually so speed was of extra importance.

I surveyed the runners around me and paced myself off some that I know. I was comfortable both in an athletic sense and in the environment with one exception; my hands. Try as I might, I could not get them to generate heat and they were quickly going numb which made me take caution in the rolling mud at mile 2. I was sure to keep my hands out of the water and off the mud on the climbs out of the pits, figuring the time lost would be less of an impact than losing feeling in my hands for the upcoming obstacles.

Running out of the rolling mud and back toward the festival area we were greeted by the spear throw…the spear man still has me beat and I’m now 0 for 6 at this obstacle. I pumped out my 30 burpee penalty and got right back to and was pleased to see the Hercules Hoist just around the corner. The hoist has never really been a problem for me so I figured it’d be a good chance to possibly make up some lost time. The weights are heavier this year, moreso than I expected, but I got it done, ran over to climb the storage containers and hustled back down toward the Traverse Wall. 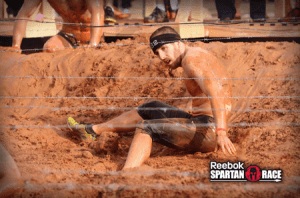 Approaching an obstacle you’ve never completed is a tremendous mental roadblock when you’re trying to make up time but I was pleased to see that the walls were not too muddy because we had yet to go through a barb wire crawl at any point. I started my way across the wall and hoped that the bit of grip work I’ve done in the past months would pay off…it did, but to no avail and I found myself falling off a little over half way across. Another 30 burpees down and it was back to the pursuit of time, over the standard walls, through the woods, carrying the sandbag, it all went well.

The course then introduced a gamble; the option of a cargo net up a hill over a shorter 250ft or a 1000ft long run winding up the hill. I decided to go with the run since I knew that the rope climb was still ahead and my thinking was that I’d save my arms. It was a bad decision and I got chicked by the female leader in the process. From that point it was just the tire drag/pull before heading back out the festival area for the final stretch; a potent combo or the rope climb, a short barb wire crawl, the rope wall, and LONG GNARLY LOW barb wire crawl to the line make that finish seem much further away. I crossed the line in 1:05:16 and just missed the top 100 .

Sunday was much the same, I believe the temperature at the start was a few degrees warmer but that could have just as easily been placebo. I made the decision to switch my strategy a bit from day 1 and go out hard at the start and push my pace early to try to avoid getting behind anyone slower on a single-track portion of the course. The plan worked and I was among the first 20 into the rolling mud and spear throw…but Spear Man shot me down again…and today the burpees took longer since I had already exerted myself more.

Traverse wall, worse than Saturday, I made the decision to just drop off early and burpee out instead of wasting more time and energy on the wall and inevitably doing the penalty anyway. I got right back into the pace I had set prior to the obstacle heavy portion of the race and was working my way around some other racers. When it came time for the gamble again, I wasn’t going to make the same mistake twice and I headed straight for the net; it was DEFINITELY the better option. 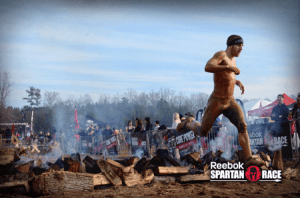 I was finally really confident that I’d finish faster than I had the day before and was running strong until the rope climb in the final stretch. I fell apart, plain and simple, I could not muster my way up the rope for anything and was given the 30 burpee penalty; which I completed slowly, feeling demotivated and like I had lost any chance of besting my previous course time. I crawled slowly through the first portion of barb wire and approached the subsequent rope wall and additional crawl with the aggression of a slow on Prozac. That is until I heard a competitor splashing up behind me through the mud. I had come to terms that I was behind my performance yesterday but was not ready to lose an additional position. I summoned up the enthusiasm I could and picked up my pace through the remainder of the crawl, over the fire pit, and through the gladiators with an official time of 1:00:10. WAIT! 5 minutes faster than yesterday! I must have really been cooking with fire through the rest of the course to still manage that after an additional 30 burpees and losing motivation. Morale of the story: Never Give Up.

Next Spartan event for me is my “hometown” venue is Indiana. I have a little over a month to take what I learned over the past weekend and improve. I’ve got a trainer on my side to help with my grip and additional upper body strength and I look to better my placing significantly in front of my family and friends.