UPDATED: See the latest news directly from Spartan Race HQ and from Dirt In Your Skirt the end of the article!

April 2, 2014 – An end to an era, the Spartan Race finishing line gladiator pit is no more.

Starting this weekend at Reebok Spartan Race Super in Las Vegas, there will no longer be pugil stick-weilding guys or gals standing between you and the finish line waiting to beat you senseless… after already enduring 10 or so miles of suffering. Take a good look, old photos are the last time you'll see this: 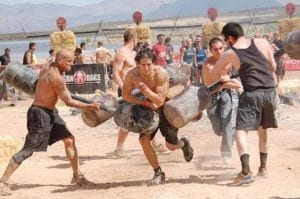 As we say goodbye to these administers of padded stick punishment who have been sentinels at all Spartan Races since 2009, let's go back to where it all began and learn the origin of the gladiators…

Brian Duncanson, one of Spartan's Founding Few:
I think a few of us had an idea to have someone dressed like a gladiator, and we purchased our first pugil stick. Anthony was a huge kid and we hid him in the woods. Racers had to go through a tight section of evergreen trees and they burst out into an opening when they met our first gladiator. The feedback was priceless. Spectators, who were all over the course, quickly migrated to the spot in the woods where all of the screams were coming from to watch people get lit up. We decided right there that the gladiators would always be located right at the finish line so that everyone could watch. 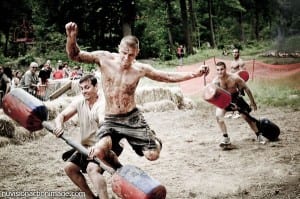 Aside from a few loose fillings and a couple (thousand) bruises, why did this Spartan Race tradition come to an end – and get announced the day after April Fool's? Is this some belated joke?

We reached out to Joe De Sena himself to get the straight answer, and he didn't mince words at all:

We want to make sure every obstacle within a Spartan Race is athletic in nature and as part of the formation and affiliation with a new global federation…this was one of the first steps in that process.

[it was a tough call] but basically as part of our move to the Olympics review..and federation formation we are making some required changes.

We want to ensure that within a Spartan Race the obstacles are athletic in nature which also falls within the Federation and Olympic guidelines.

While the Gladiators will be missed, the change is necessary in moving the sport forward. The timing mats were positioned to end the race immediately following the Fire Jump to prevent any issues that could rise from having an obstacle operated by humans for some time now. Eliminating them entirely just goes to show that this sport is rapidly evolving.

Gladiators have been a unique part of the Spartan Race experience since the first event in 2010 when I ran through pine trees to find the original gladiator hiding out on the course. They have been a fun part of the race, but as Spartan transitions into a serious sport it is understandable that they are too much of a wild card as part of a sporting event. They will be missed, but hopefully Spartan will have a few gladiators in the festival area for photo opts for people.

We reached out to Brad Kloha, veteran of ~20 Spartan Races during his Run to Remember 100 races in 52 weeks campaign:

Ultimately, I don't believe the removal of the Gladiator Pit diminishes the Spartan Race experience in any way. Removing the Gladiator Pit at the Spartan Race will be a change, for a while, and for those of us who have done them I think many of us may miss it, but probably not for that long. If I've seen anything from Spartan in the past few years, is that they continue to innovate, to challenge, and to move obstacle racing forward to legitimacy as a sport. Joe, Andy, and the Spartan Race team have a vision and I trust where they'll take it, and I'm certain we'll see new obstacles along the way that will make us quickly forget those that are eliminated in pursuit of legitimacy. The entirety of the race, not one single element, is why you see athletes who travel the country (and world) to participate in Spartan Races throughout the year (even if they aren't in the competition for prize money) which I don't think you see quite so often in other series. 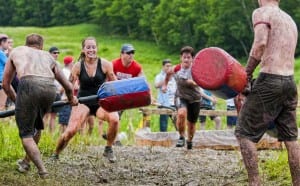 Anyone who's talked to Joe for more than 5 seconds quickly learns the future of Spartan Race in his eyes is Obstacle Racing (OR*) becoming an International Olympic Committee (IOC) recognized & federated sport, beginning with developing OR standards for competition with the United States Olympic Committee (USOC). By eliminating the subjective and inconsistent nature of the gladiators being – well, human – the obstacles and challenges of Spartan Race are all quantifiable on a pass/fail system; you either complete an obstacle that requires physical strength, stamina, dexterity, or courage – or you fail… and perform 30 burpees. We've seen many hard hits over the years in the gladiator pit, but have yet to see anyone exactly “fail” that final obstacle.

So, farewell to the shirtless, muscled pugilist stalking the finish line, separating the weary contestant from their hard-earned medal (and a cold shower). Au revoir jouster against the unarmed weilding an oversized Q-tip. The bruises you administered to our exterior have healed, but your contusions on our soul will live in infamy. 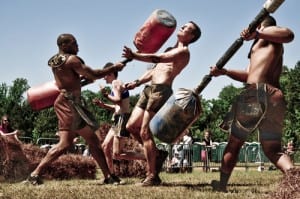 *Note: Joe's a purist, and prefers “OR” to the now-ubiquitous acronym “OCR”, yet another standard he's looking to set.

UPDATE from Las Vegas Spartan Super: Was this whole “Gladiator” thing some kind of hoax?

4/4/14: It seems Spartan Race is at it again – as we all learned when they tinkered with the trifecta medals, the secret meetings going on Spartan HQ somehow take us all by surprise and are never fully revealed – until we see them on the course. Joe De Sena and the crew seem to actually enjoy hearing us scream about these leaked decisions before giving us all the facts. Do they get off on screwing with us die-hard OR freaks?

I reached out to Joe earlier today and seemed to catch him in a quizzical mood. Instead of giving me answers, he asked me to decode the gladiator announcement myself.

“Spartan was founded on two very important principles: 1. Every human should get their ass off the couch and 2. We should NEVER be upset over the small things in life. You figure it out.”

I was left to ask myself: “Am I doing a good enough job of either of those principles? Are all Spartans?”

I also don’t think this gladiator story is anywhere near complete, what surprises about these changes have we yet to learn, and when? When will we be getting more insight into their role creating this new interational federation of obstacle racing – which I’ve learned is supposed to be launched in May – and knowing how the have always delivered at the finish line… I know for sure the olympics are a Spartan focus and we all know Spartan is ever evolving but even still I suspect a positive surprise this weekend in Vegas.

4/8/14: Margaret Schlachter, author of Obstacle Race Training and  founder of Dirtinyourskirt.com brings us this update:

“This past weekend was the send off of them in well a rather underwhelming way. As I strolled up to the starting area, which now includes a wall to jump over before reaching the start line, there they were, two men standing, looking not very excited to be there. They were wielding the pugal sticks and tapping people as they went through. A sort of lackluster send off of such an iconic part of the race. So it was there in a less than glorious fashion we said goodbye to an era of Spartan Race and hello to the era of Reebok Spartan Race.”

Read more in her article Goodbye Gladiators: A Lackluster Goodbye in Las Vegas.

Stay tuned to Mud Run Guide for all the details, we’ll keep you posted on every move Spartan makes!

Want to learn more about what makes Joe tick? Check out our feature from last month’s Death Race Mexico: Not Your Average Joe.