BoldrDash holds an annual event on a beach, and this was it. It was fun, but challenging, though not too hard for a newcomer to obstacle course racing. In places, the obstacles allowed you to select a harder or easier challenge, such as the ten foot walls. You had your typical ten foot wall, then on the side was a wooden ladder climb for the majority of us.

The race started right off with the BoldrDash – pick up a rock of your choice and run to a cone and back. Not the hardest obstacle of the day, but it was awkward running with a football sized rock jiggling about. Then you have some beach running. For the first half of the race, you’re running along the water, on the wet, packed sand. On the way back, you’re running on the landward side of the beach, in loose, soft sand. Just running on the sand was practically its own obstacle. 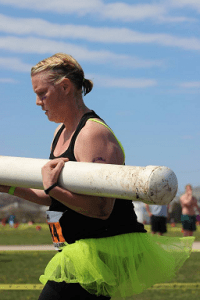 This race had the most interesting obstacles that I have seen so far in my limited experience. In addition to the typical cargo net climbs, tube crawls and different sized walls, there was an A-frame climb where the steps were chains, a potato sack obstacle, inverted walls, and a balance beam hanging by chains. There was a second, stationary, balance beam where you had to carry a pipe with liquid inside of it, which totally messes with your balance.

There was also the Boldr Run, which was a solid quarter mile of traversing across rocks of all sizes. In some spots, it was gravely sand or fist sized rocks, ranging up to massive boulders. You might get to run a pace or two, but then you’d have to jump from rock to rock for a while before you can safely run a few more steps. It was interesting and definitely took my full attention to watch my step. Though the terrain seemed dangerous, I’m happy that no one was injured.

The bucket carry was the toughest obstacle for me. You had to grab a pail off a platform, run down the beach, fill it in the surf, run it back to the wall, climb onto the platform and dump the bucket into a tub. Then repeat. And again. Towards the later heats, there was a line waiting for the buckets, so they cut it down to two laps. It was tough for me because the bucket was hitting against my leg while I attempted to run with it, and then there was that wall to jump. I had to break for breath before jumping up the wall.

My favorite obstacle was the over under walls. This time, you had to pick up a buoy full of water, throw it over the wall, climb over, then take it under the next wall with you. I was quite proud to be able to jump the 4 foot walls easily, so I was going along happily until I realized there was no end! It felt like there were always more walls ahead of you… But when it finally ended, you had to carry your buoy back to the start of the obstacle. 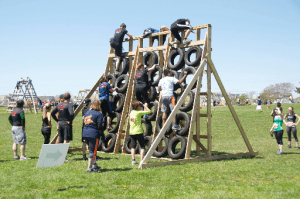 The final obstacle was the Tarzan tires, a series of hanging tires that you have to climb across as they sway wildly. This one also had a line and the volunteer was offering 10 burpees to pass the obstacle, but I waited a minute to take my turn. From here, it was another short run to the finish line, a total of 3.29 miles, according to my GPS.

The worst moment was when I turned off the beach at just under 3 miles and found a field full of running and obstacles waiting. I was so ready to be finished, but there was still more in store. This seemed to be the theme of the race, more, more, more. 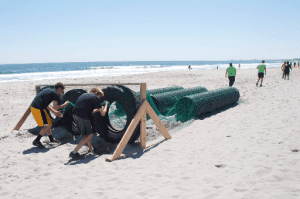 There were some negatives to the race, but I felt they were more than compensated for by the fun I had. First, like any race, there were not enough volunteers to guide you on the obstacles and through the course. The Race Director did her best to bring in volunteers by offering a free race to anyone who volunteered and I happily took this offer, spending most of the day cheering on runners and directing them where to go. There could have been more and better course markings in some places. During my run, I found that when I had a question, there was a volunteer to direct me, but others were not so lucky. The biggest problem was the spectators. Due to the layout of the course, the spectators were everywhere, sometimes even in the runners’ path. The volunteers made efforts to keep the path clear, but people still got in the way at times and runners had to speak up to get them to move. Part of this problem was the way the course made use of the sidewalk in places, but also because this was a public beach and brought out a lot of spectators. There was even a wedding on the beach during the later heats that had to be avoided. Again, it was a public beach.

Many people look forward to the festival after the race, but this race did not have one. This is probably because no alcohol was allowed on the beach. There were some vendors to check out and the built-in kitchen was used to sell food, though I’m not sure everyone noticed the food vendor. There were tickets given out for a free beer at a local restaurant, but again, I’m not sure everyone was aware of this. The restaurant did, however, run out of the specific beer that was being offered, so maybe it had a bigger turn out than I realized. They were nice enough to substitute a different kind of beer.

Overall, I really enjoyed this race. I completed the course in 1:07, number 509 out of 1032 runners. The obstacles were unique and a perfect challenge for an Average Joe. I’d say this race was 4 out of 5 stars.

Did you do the Providence Rhode Island Bold R Dash? Share your own rating & review about the event today!