I always have a blast and look forward to what Tough Mudder is going to bring to the table. I was scheduled to go off in the first heat at 10 AM on Saturday and the weather was perfect. I arrived there between 8-8:15am and it’s always exciting to see people already waiting in line to get their bib # and getting fired up!! Parking was well marked and all the volunteers were in their places and racers were checking in smoothly. 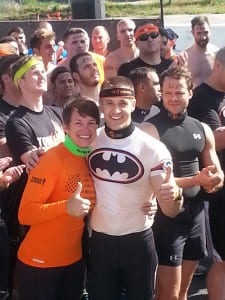 At the starting line, the TM team was revving up all the Tough Mudders, chanting, yelling, and cheering. You could feel the energy. I also got the privilege to meet Legionnaire Eric D. Jenkins, previous WTM and completing his 29th TM that day!! He was awesome and the crowd loved him.
The beginning of the race started with us running down and back on the speedway about 1.5 miles before coming to our first obstacle…. Balls To The Wall – Climbing a rope up and over the wall, to me, was a good warm up for the next obstacle to come, as we made our way down the grassy hill to the Pole Dancer. This was one of TM’s “new” obstacles this year. It took straight-up arm and shoulder strength with momentum to get across the body of water beneath you, especially the dip in the middle. People were falling by the way side and others improvised an easier way to get across by going feet first and inching their way across the poles almost straddling it.

Every TM I’ve participated in so far, I have come to expect several of the same challenging obstacles, like the Berlin Walls, Lumber Jacked, Just the Tip, Walk The Plank and Glory Blades. TM always has solid built structures, deep water pools with water safety and medical personal everywhere you look. They also, always do a nice job of throwing natural obstacles in between the major obstacles, like the Mudder Section, Creek Crusade, Mud Slide, Pitfall, Ha Ha Ditch and the Hazard. 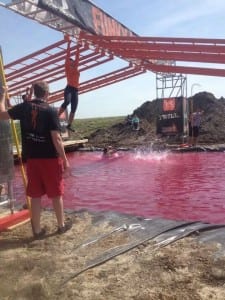 The Funky Monkey this year was new and improved. It peaked higher in the center and was longer with more bars than last year. I made it across without falling in the red colored ice water below, but my hands were on fire!! Nice! After we swung from the Funky Monkey, it was off to the hills of the Killa Gorilla. There’s nothing like running up and down, up and down hills about ten times, and the Electric Eel was a little more shocking this round. Why? Because it was in a pool of water instead of mud, so every time the person in front of you or on the side of you got zapped, it traveled through the water and zapped you too!! I was getting it from all sides!! Woowhoo! The only thing running through my mind at that given moment was, MOVE PEOPLE MOVE!! 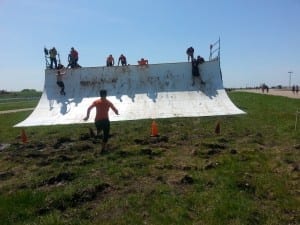 I’m afraid it was the Everest that did me in this time. It took me three attempts to conquer it. This time to make it more difficult TM tore up the ground in front of the half pipe so you couldn’t get a good running start. You had to jump the little mud mounds and leap over a muddle puddle before you hit the ramp. It was slick.

The next obstacle was the Mud Mile which is usually one of my favorites but I have to be honest, TM let me down. I scaled them effortlessly. They were about half the size of last year and not near as deep in between (Too easy TM). Next were the Warrior Carry and Tired Yet before we got to the “new” Family Feud. The Family Feud could be fun if you had more spectators there to participate and if the ropes on the ball were actually long enough to reach someone? I was expecting a little more from that one.

Now, for The Legionnaire’s Loop, where we pulled four stacked truck tires, crawled through black tunnels with electrodes at the end to exit into, and running through muddy marsh before getting to the Fire In Your Hole. The Fire in your hole ROCKED!! It was nothing but awesomeness!! You had to crawl up a cargo net ladder to the top, sit on the slide with your legs together, arms across your chest and go flying down the slide, through the fire and across the water at high speed. FANTASTIC!

And last but not least, the infamous Electroshock Therapy at 10,000 volts. Now was the time to get shocked, get your beer, and EARN YOUR ORANGE. It’s funny how people stand there and anticipate what they’re going to feel. Just take a deep breath and GO. If you get shocked and knocked down, get back up and do it again!! That’s what makes you a TOUGH MUDDER FUDDER!!

The festival area at Heartland Park Topeka was nice with lots of big tables to sit down, eat and drink with friends. There was a nice open area to wash off and changing tents for men and women to clean up. TM has a lot of sponsor’s but I noticed only a few of them were there. The venue should have been a lot bigger.

All in all I would give Tough Mudder Kansas 4 stars out of 5. I’d like to see more difficulty in their obstacles. That’s why we’re there! Bring it TM!

Did you do the Tough Mudder Kansas Race? Share your own rating & review about the event today!