I AM OCR: Rob Barger I remember being 8, maybe 10 years old. It was winter in New Jersey which meant a lot of slush. Too warm to freeze but too cold to melt. The rain was thinking about turning into snow but couldn't seem to fully commit. It was just wet slop. My Dad dropped me off at basketball practice in the usual place at the usual time. He drove away and I made my way to the front door of H & M Potter Elementary, the locked front door of H & M Potter Elementary. It was only just then that I noticed a) there were no lights on inside the school, and b) there were no cars in the parking lot outside, except for the one my Dad was driving which was, at that unfortunate moment, exiting the parking lot. I don’t remember yelling for him, not that he would have heard me anyway. Keep mind, this was sometime around 1980 when there was no such thing as a cell phone. Heck, I knew people that still had rotary phones. (Feel free to search Google if you don’t know what a rotary phone is.) 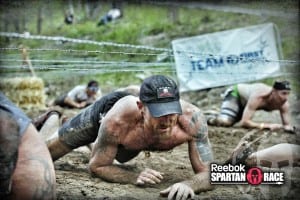 With no one around to ask for a ride and no change for a pay phone, I started walking home. It was a little over a mile away but the night was getting colder. Unfortunately, the freezing rain, still hesitant about making a life change to finish out the night as snow, was not getting any less wet and cold.

It was a dark walk down Ocean Gate Avenue. Yes, I could have easily knocked on someone’s door and asked for assistance or even stopped in the McDonalds that was significantly closer than my house but in my mind I had already made the decision that I was going to get home on my own. Regardless of the dark and the rain, ignoring the cold, I was going to get there.

I must have stepped in every puddle along the way. It seemed like every time I took a step it was only to go from one icy pool to another. I think the thing that upset me the most was that I really liked the blue suede Adidas high tops I was wearing and now they would never be the same. Odd, the things you focus on when the situation is less than ideal.

By the time I reached my house I was soaking wet. To hear my mother tell it, I looked like someone had dumped a giant snow cone on my head. Needless to say, she was surprised when I showed up at the door. 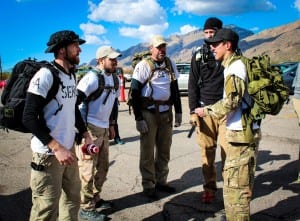 It was sometime during that frigid, soggy, mile long eternity of a walk that I discovered my affinity for adverse conditions. It would have been easy to make that walk on a warm summer day. Even a slightly nippy afternoon in the fall would have been manageable by most standards. But at night? In freezing rain? Honestly, I didn't mind.

Years later, when I was in college, I often found peace in a 3 or 4 mile walk at 2:00 AM. Of course, the next day the people I was at the party with would ask, “Where did you go? All of a sudden you were just gone.” They would stare in disbelief when I told them that I walked home.

When I first discovered obstacle course racing, I knew I had found something that I could feel at home with. Although I've been told that I’m built like a runner, I've never really liked it. It was too boring for me. Just mile after mile of plod-plod-plod-plod “What am I doing?” plod-plod ”WHY am I doing it?” It seemed ironic that someone who enjoyed the solitude of a long walk at 2:00 AM would find running so mundane. But obstacle racing…that was something I could embrace.

My first OCR was the 2012 Spartan Super in Temecula, CA. I had a cute little workout routine going, mostly in my garage or occasionally jogging a 3-mile loop (remember, I said running was boring) around the neighborhood where I lived in Las Vegas. Having lived in the vicinity of Temecula for two years prior to moving to Las Vegas, I should have remembered the hills and incorporated some hill work into my training. Should have…but didn't. 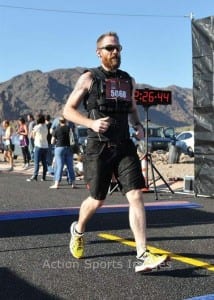 Despite being in what I thought was “good shape” I didn't fare so well against the unrelenting hills surrounding Vail Lake. About halfway through the race I started to cramp in both calves. At times the cramps were so bad that it felt like muscles were tearing. I paused for a moment and thought, “Well, I can turn around and go 4 miles back…or…I can continue on for four miles and finish this thing.” I knew going into the race that I wasn't going to win anything because I wasn't racing in the Elite Heat. But I wasn't there to quit, I was there to finish.

The cramps continued over, under, and through every obstacle. By mile 5 my right quad was starting to cramp. By mile 6 my hamstrings felt like rubber bands trying to keep my legs at a permanent 90° angle. By mile 7 my right quad was cramping so bad I could see bundles of muscle fiber twitching in a disquieting fashion that looked like worms writhing under the skin. I barely made it over the fire jump at the end of the race. But I finished.

Since that first less-than-spectacular showing at my first OCR I have taken steps to learn more about training, nutrition, and, most importantly, how my body reacts in various scenarios. In November 2012 I ran the Spartan Beast in Sacramento, finishing the 13.9 mile course 15 minutes faster than the 8.9 mile Temecula Super. From there it was, “More! I want more!” I signed up for a GORUCK Challenge, the 36-hour S.E.R.E. Performance “Tucson Triple” and the Spartan Death Race.

Everything changed. My eating habits, what I drank, how I trained, everything. Even running became something that I became accustom to because I knew it was part of the plan, part of something more. 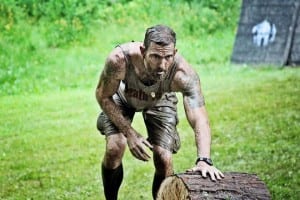 This month I will again travel to the mountains of Pittsfield, VT to embrace the Summer Death Race. The theme for 2014 is “Year of the Explorer”. Of course, this is the Death Race so that could mean anything. Whether we’re marched in 10 mile loops around town for three days or sent ambling through the Green Mountains somewhere in the direction of Canada, it is sure to be an adventure. The Death Race is more than just carrying heavy things for long distances, memorizing literary passages or doing hundreds upon hundreds of burpees, although those things are nearly guaranteed to happen.

The Death Race is a physical, mental and emotional journey. It is designed to break you, to teach you, if you’re willing, a lesson about yourself. It’s up to the individual to see the lesson in the journey. Some people will focus on the wrong things and be consumed with, “It’s not fair!” and “That person is cheating!” Others, even some first time participants, will let go of what they can’t control and not give it another thought. They will go from one task to the next with no preconception, no rating or judgment system, they will simply go. Life isn't fair, neither is the Death Race.

Out there, on those trails, on that mountain, I hope to meet a better version of myself. My name is Rob Barger and I am OCR.