The Inaugural running of the BattleFrog Series Race kicked off this past weekend with a Bang. Literally. An Obstacle Course Race designed and operated by current and former Navy Seals was marked by all of the Military Pageantry customary at patriotic celebrations around the country. Helicopter fly-overs, Seal Team Demonstrations, the sounds of (blank) rounds being fired, and the occasional boom of an artillery simulator explosion set this apart from a casual mud run the moment you parked your car. 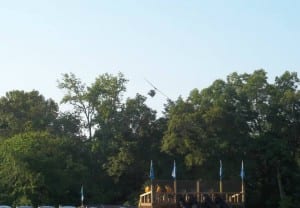 The Brainchild of many retired and now hugely successful US Navy Seals, this race has come out of the gate ready to run neck and neck with the big players in the OCR world like Spartan and Tough Mudder. The years of experience amongst the race directors and staff lends a level of professionalism to the whole event that translates into a wonderful experience for everyone from the Spectators, through the different levels of runners, up to the Elite Racers who saw cash prizes for podium finishes and even a ride in the helicopter for some of the luckier ones. That big check was cool, but taking a ride in a vintage Huey was the cherry on top.

The race is built and run by people who bring years of experience participating in and organizing events in various sports such as OCRs, Marathons, Ultra Marathons, Triathlons, Judo, Cycling, Mountain Biking, Adventure Racing, and Paddling. They have been able to design and build an Obstacle race course that is pretty much as good as it gets.
There are several different lengths and styles of races that cater to everyone from small children up to the truly Elite Runners. Hobie Call, Yuri Force, Sean Clayton, Eddie Kovel, Casey Camp, Jason Grech, Jolene Wilkinson, Amie Meyer, Andi Hardy, and Jennifer Marciante are just a few of the more familiar names who took the Podium in some of the first ever BattleFrog races, but the races were enjoyed just as much by the rank and file weekend warriors and children. The impressive “bling” of the BattleFrog medals made everyone smile. 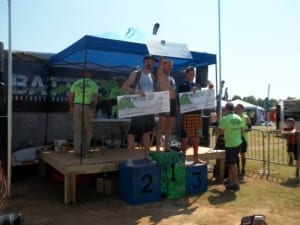 The namesake BattleFrog Race was listed as 15k with 25+ obstacles. Several GPS devices had the length slightly lower at about 7+ miles or 11+k. Those missing 2 miles were lamented by a few, but the people who ran all knew they’d participated in a challenging event.

The BullFrog Race was listed as 5k with 15+ obstacles. The mileage on this put it at just over 3 miles, so there were no surprises on the distance. It shared most of the same obstacles as the longer race, and both races took runners through a beautiful mixture of trail running, hills, running on exposed granite, and through fields.
Both races were run simultaneously with runners being directed via signage and volunteers on how to make the necessary detours so that they could run the 15k or 5k race depending on how they were signed up. A few runners became disoriented and stayed on the 5k route when they should have taken the 15k detour, but there weren’t many. It’s possible that in the future there should be more volunteers, signs, and cones to prevent this from happening. Another idea might be for the 15k to be run in the morning, and the 5k to be run in the afternoons. Once the 15k waves and sweepers pass, the detour could be roped off and any runner afterwards would only be doing the 5k. 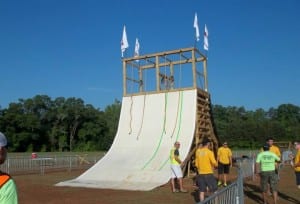 There were Tadpole races that were listed as 1k with 8+ obstacles so that children between 4 and 13 could get involved in the fun. The beaming smiles on the faces of the kids let everyone know how happy they were to be joining in the fun instead of just being dragged along by Mommy or Daddy to sit around and be bored.
The Obstacles were very challenging and extremely well built. These were monuments made to stand the test of time and thousands of racers abusing them. Teamwork was a necessary factor in helping the average racers, but volunteers and the other racers were available to pitch in. And there were Seals spread throughout the race to offer assistance and encouragement. To have a true American Hero cheering for you and helping you meet a challenge will put an incredible adrenaline rush into your system. The penalty for failing an obstacle was to do 8 count bodybuilders. If you don’t know what these are, think of a variation to the Burpees we all know and (don’t love) http://youtu.be/TxQT-wZdP28
The Festival area was set up extremely well, and registration went very smoothly which was a pleasant surprise because Saturday was the first time anyone had ever done this for BattleFrog. A Merch Tent with cool BattleFrog quasi-military gear sold out most of its more popular items by the end of the weekend just because it was such great stuff and a souvenir of the first ever BattleFrog. Buying the book, Seal Team Six, and having a chance to have the author, Don Mann, sign your book was a true thrill.

The food choices were reasonably priced, and volunteers got vouchers so they could eat a respectable amount of “real” food. The post race free beer was enjoyable in the hot spring sunshine, and the Biggest Team got even more free beer. A note to Teams out there – The Biggest Team Tent was a large set of 4 tents with tables and chairs in addition to the free beer. This is the most impressive treatment I've seen of a Biggest Team, and if BattleFrog comes near you I would recommend trying to score Biggest Team Honors. 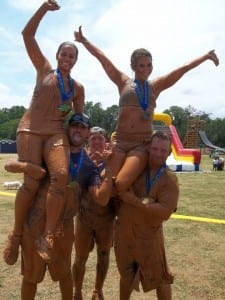 There was really good and energetic music playing during the course of the 2 days, and some pretty awesome dancing going on at times. Other races throw sub-standard races but great after parties, BattleFrog wants to wear the crown for best experience in both arenas. And there were fitness competitions and obstacle examples set up in the festival area just to keep things moving and more exciting.

The US Navy Seals demonstrations were thrilling for all who got to watch. There was a mock-terrorist attack, then the Huey swept in and discharged the Seal Team and their canine who neutralized the threat, then loaded back up and took off into the sky. This is one event where paying the Spectator Fee actually is worth the price of admission.

The BattleFrog Series directly supports several US Navy Seal Charities with their proceeds. The Navy Seal Museum, Memorial Trident House, Navy Seal Foundation, and the Foundation for Navy Seal Veterans will all benefit from the BattleFrog Races.
By the end of the weekend the overall consensus was that this was the most fun Obstacle Course Race most of the runners had ever done. For the first time ever stepping up to the plate, BattleFrog knocked it out of the park!

Did you do the Battle Frog GA Race? Share your own rating & review about the event today!