Tough Mudder is one of the major names in obstacle course racing, but it’s not a race, it’s a *challenge*. It is 10-12 miles, untimed and group focused. Obstacles are designed to be conquered together, by helping one another through.
My best friend has been inviting me to do the Tough Mudder for several years now, and I have declined all opportunities to participate. This year I caved and signed up. The sheer distance had been the major factor in my decision, but also unnerving were two of the legendary obstacles: “Walk the Plank”, a 15 foot jump into water, and “Electroshock Therapy”, where you run through active electrical wires and risk a jolt of electricity that is enough to make your knees buckle beneath you. 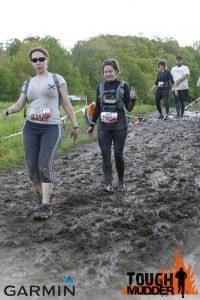 I did very little to specifically prepare for TM. I occasionally set the treadmill on its steepest incline and did a fast walk. I continued running my three miles, and twice made it outside for trail runs. Most of my preparations had to do with my gear. I read article after article about what to carry for longer races and frantically worried about every possibility: hot, cold, sunburn, bugs, food, water, electrolytes. I packed my stuff several days before the race, then checked it all again the night before (in case anything had grown legs and run away, I guess.)

I use a Geigerrig Cadence hydration vest for my water source, and I mixed up an unflavored Pedialyte and water mixture until it wasn't so sweet. Then, I began stuffing “essentials” and “emergency” items into the tiny space available. Into the front pockets I packed sustenance: Clif bars, Lara bars, Sport Beans and Snap candy. The bladder compartment gained travel sized sunblock and bug spray, plus a plastic baggy of band aids and special blister band aids. Finally, I stuck two pairs of socks into a freezer-weight Ziploc and stuffed that into the exterior pocket. This was totally more than I needed, but I finally felt satisfied that I had every concern covered. Except for the cold. 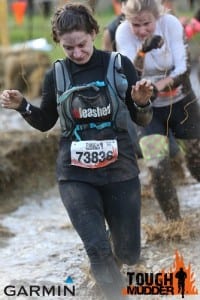 Somewhere along the way, I lost sight of the temperature and the water and the fact that I get very cold, very quickly. I had originally planned to purchase an inexpensive Mylar heat blanket, but a friend recommended a neoprene “diver’s” vest instead. I decided this wouldn't be a concern until later this year when the weather began to get colder. Bad idea. As you’ll read later, someone’s discarded heat blanket was the only reason I was able to finish the race.

On race day, we arrived on site and checked right in. Easy as pie. There was a charge for parking, but if you ordered a parking pass online, it was a little cheaper. Then there was a charge for bag check. And all of this, after paying the hefty registration fee, which was in the area of $100, depending on how early you register. Way to nickel and dime us, Tough Mudder.
We got into the start corral, which was technically, only the corral before the corral before the corral. Yes, there were three separate waits. Oh, and, you don’t actually start at your start time. You start at whatever time you make it to the front of the line. This was annoying, but at least the MCs were pumping up the crowd. We finally took off around 10:40, an hour after our registered start time.

The course at Mount Snow, VT, is all mountain with a few obstacles to break up the monotony. Up the mountain, down the mountain, back up the mountain. We hit the first obstacle, “Kiss of Mud”, which is a muddy barbed wire crawl, with rocks thrown in to make it harder on your knees. I pulled my pack off and looped it about my arm, so it wouldn't get caught on the wire. No problems there. Half a mile later was the next obstacle, a set of inverted walls, followed by the monkey bars another half mile later. Great distance to obstacle ratio so far, but later, the obstacles were about a mile apart. That’s a mile of mountain climbing misery before you get something interesting to break it up.

One more time, in case you haven’t realized how much the mountain sucks: You have just paid a hundred bucks to climb up and down mountains for hours. Did I mention half of this climbing is through ankle deep mud? Yay. But on to the obstacles. Around mile 4, we reached the infamous “Arctic Enema”, a dumpster full of ice water, with a handy board across the top so you’re forced to submerge before climbing out. I rushed through this as fast as possible before my body could freeze up on me.
If you've managed to warm up after this obstacle, where we had a rare peek of sunshine to help, you then go on to “Walk the Plank”, the above mentioned 15 foot jump into more water. It was at this point that the cold got to me. Maybe it’s because I spent five minutes soaking wet, screaming encouragement at my friend, while she was frozen at the top of the obstacle. The volunteer was fantastic and talked her through it, encouraging her to make the jump instead of giving up and climbing down. After a wave of cheering from all the participants around us, and a 3 count from the volunteer, she finally jumped. If it weren't for the good spirit and patience of the volunteer and the crowd, she wouldn't have been able to do it.

We got started on the course again, but I was shivering badly, despite the movement. We reached a rope & wall climb, which had a lengthy wait under cloud cover. My hands were so cold that I wasn't sure I would be able to climb up the rope, but I came to life and powered over the 12 foot wall without help. Go me! This was my proudest moment of the day, the only real challenge for me. 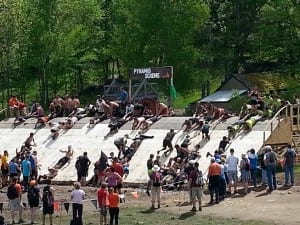 On the other side of the wall, we got moving, but at this point, I was so cold that I was having thoughts of quitting, in order to find a warming area. If I had come across a medic or water point, where I could have gotten help, I would have quit the race halfway through due to my severe intolerance of cold. Only two races prior, I had become so cold that my lips turned blue and it took over an hour of sitting in a heated truck to regain feeling in my extremities. I kept moving despite my body’s desire to shut down.

Somewhere around mile 6, my team skipped a series of walls that had a long wait, so that I could keep moving and generating body heat. Around this time, we began to see other cold runners wrapped in heat blankets, just like the one I decided not to get. Fortunately, we later came across a heat blanket that a warmed up runner had discarded in the middle of the trail. Right off the bat, the breeze was blocked, which was a big help. As the blanket contained my body heat, I began to shiver less and slowly warmed up. Around two miles later, I was warm enough to discard the blanket (into the trash).

During that warming time, we came across a couple more obstacles. One was a series of elevated logs that you had to jump or climb over. Then we had “Pole Dancer”, a new obstacle consisting of two slippery poles shoulder width apart. You have to shimmy your way up to the peak, then back down. Not a bad obstacle, but not a great one. 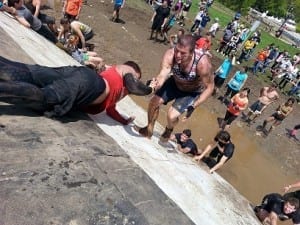 Finally, we came to my favorite obstacle of the day: “Pyramid Scheme”, another new obstacle. This one is a slick, slanted wall where you have to build a human pyramid and work together to climb to the top. The feeling of camaraderie was strongest on this obstacle, where you work together with your team and/or perfect strangers to help others up the wall. After this we reached the 9 mile marker and the buddy carry. I gratefully got a piggy back down to the “switch” sign, but was too small to carry either of my friends. So free piggy back ride, at least.

Here, we split ways so a friend could do Legionnaires’ Loop. From what I've heard, there were some walls, a barbed wire crawl, a log carry and a mini “Electroshock Therapy” with a sign afterwards saying that it wasn't on. Haha. When we met up again, it was at the viewing area for “Fire In Your Hole”, the new water-slide through a wall of fire. Looked awesome, but not exactly a challenge.
Lastly was the real “Electroshock Therapy”. This was the obstacle I was afraid of. I didn’t give myself time to think, just ran right in. I immediately got hit with a shock that nearly dropped me to the ground. I stumbled around and caught myself, still moving forward. Halfway through, the guy ahead of me batted a huge opening through the wires, which I quickly followed out, without another shock. Once was enough, but if I had not gotten shocked, I would have been sorely disappointed (and required to complete TM again). 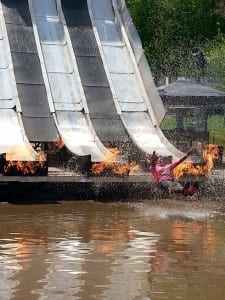 It was another half mile to the finish line, our headbands, beers and T-shirts. In the “Village” there were food vendors, drink vendors (Gatorade was $6!), and showers. Cold showers were free, but there were hot showers for a fee. They were really out for every penny they could get.

The race measured just over 10 miles, and took me 6 hours to finish. I completed the course, did the two obstacles that made me nervous and accomplished my mission. It had to be done once, for experience, but I’m not planning to do another Tough Mudder.

I was sorely disappointed by the obstacles, which are the reason I do obstacle course racing. There were fewer obstacles than I've seen at most 5K races, which seems ridiculous with three times the distance to cover. Most of the obstacles were not challenging, in either a mental or physical way. There were several “mud” areas that were passed off as obstacles, as well as an obstacle where you have to walk under a heavy net. You just put your hands up and walk. Where was the excitement in that?
Still, I can’t say you shouldn't do Tough Mudder, at least once. If there is an obstacle that scares you, take it on. If the distance alone needs to be conquered, give it a shot. But don’t expect to have more fun than the last 5K you did, just because it’s a big name and a longer distance. You’ll be disappointed.

Did you do the Tough Mudder New England? Share your own rating & review about the event today!