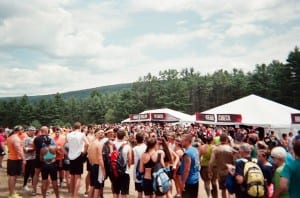 Location
For those of you who like picturesque rolling foothills and quaint little towns but haven't ventured into the area around the town of Gilboa in upstate New York, you're in for a treat. The drive in and out of Warrior Dash was quite scenic as was the course itself. The event was held inside a campground which provided several “accidental spectator” areas where many campers lined up to watch and cheer the runners on. Unfortunately, the location that the event was held was one of the few positives for the day.
Location Score: 4 out of 5

Parking
There was ample parking to handle all the vehicles and it was organized fairly well – which it should have been seeing how each car was assaulted for $10 to park in a field a good distance from the event. Portions of the trek to the event area were caked in slippery, uneven mud. I made 3 trips back and forth to the car and saw multiple people fall each time I went back and forth. Not good.
Parking Score: 2 out of 5. Decent overall but the $10 hit plus the slippery walk were demerits.

Bib Pickup
One word: Disaster. We got to the event 90 minutes before our start time, and we missed our start time. The 90+ minutes was eaten up waiting to pick up our bibs, a separate line for ID check, and a separate line for bag check. We chose to forego the bag check and I ran our t-shirts and warrior helmets out to the car. We talked to dozens of other runners who also complained about the lines, several of which also missed their start times and mentioned that “it wasn't like this last year”.

Bib Pickup Score: 1 out of 5. They didn't get a zero because at least I eventually got my bib and swag.

The Course
This was not a race. I saw more walkers than runners and even saw some people carrying their swag bags on the course. Seeing all the walkers and general lack of effort by many participants made this on-course sign especially appropriate: 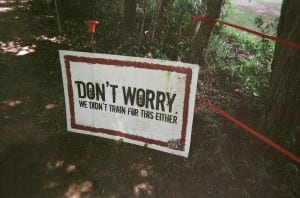 Many of the obstacles throughout the first 75 percent of the course were over/under types with a few crawls and a few wall climbs of various configurations. All of this was pretty standard stuff, nothing noteworthy. What was noteworthy is the amount of distance between obstacles. The semi-mountainous terrain would have been great in a competitive race of 5+ miles. But so much uphill distance, that was walked by most participants over the short 5k course, seemed like a waste of great terrain.

Anyway… moving on to the end of the course. 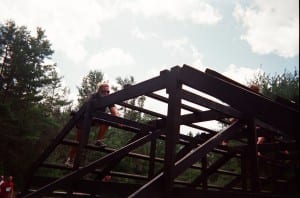 The six obstacle cluster at the end of the course was the one area Warrior Dash shined. You started this final stretch going up and over Diesel Dome, a five sided climbing obstacle that was challenging for some. Then you entered the mud pit. Believe it or not, this was probably the most challenging obstacle for most we talked to. The climb into the pit was like a sheet of muddy ice and many runners plunged butt first into the waist deep water. The muddy bottom of the water pit was shoe sucking deep. The climb out required a team effort unless you were an experienced OCR junkie and/or had the grip strength to claw into the mud that sent most people sliding repeatedly back down into the mud.

From the mud pit you climbed up and down an approximately 12 foot inclined wall with the aid of knotted rope called Giant Cliff Hanger. The course planners scored a win here by putting this obstacle after the Warriors were caked in mud. We saw one woman get 95% of the way to the top, lost her grip and came screaming back down the wall (literally) and slammed into the ground. The medic got to her seconds after she landed and she turned out to be fine. Nice reaction time by the medic!

After the incline wall you jumped the obligatory fire obstacle, and then you got to Goliath – a triple obstacle comprised of a cargo net climb, an elevated balance beam at the top of the cargo net, and a tall fast slide that sent you hurtling down into freezing chest deep water. 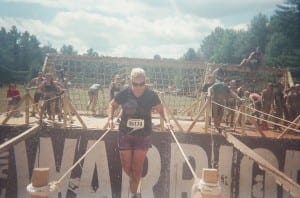 The last obstacle in the cluster had you crawl through sloppy mud under barbed wire before you were rewarded with your medal. If the rest of the course was even close to as good as the last six obstacle cluster, Warrior Dash could have been a winner. But it just wasn't.
Overall Course Score: 2 out of 5

Festival Area
The festival area was essentially Lollapalooza. If you don't know what that is, Google it! There was loud music, lots of semi-sober people covered in mud and dancing, and beer and gear tents were everywhere. The festival area was really crowded but had an easy feel to it. There were several guys we noticed, not covered in an ounce mud and in no shape to climb even the smallest wall, roaming the festival area with commemorative Warrior Dash beer steins in hand having a great time. The only detractor to the festival area was the volunteer army. Most volunteers were clueless, especially in the gear tent. The volunteers definitely could have been trained better.
Festival Area Score: 3.5 out of 5. Warrior Dash NY was more of an outdoor party with an optional mud “run”. 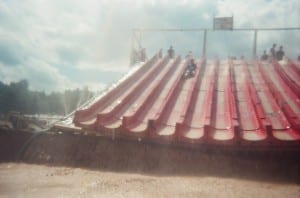 Swag
Many of the people I talked to were looking forward to getting their Warrior Dash Helmet, and I have to admit it's pretty cool even if the quality isn't great. The t-shirt was similar, decent design but thin material that probably won't hold up to many washings. You can buy sturdier models from the gear tent if you're so inclined. In the gear shop there was a decent variety of stuff. I picked up a beer coozie in the form of a warrior kilt that will add nicely to my coozie collection. Speaking of beer – insider tip: A collector's edition plastic beer stein (filled with Shock Top) ran you $20 in the beer tent, refills were $10. However, you could buy the same stein in the gear tent for $8 and still get the $10 refills. Yeah, the savings is only $2. But if you had 5 guys in your car and you all saved the $2, your parking then became “free”. At least that is how I rationalized it.
Swag Score: 4 out of 5. No other race gives you a pretty cool medal with a built in beer opener, a t-shirt, and a Viking hat.

Event Rating and Final Notes
I've been running obstacle courses since 2004 and have done several this year including Battlefrog, Fitathalon and Rugged Maniac with a few more already registered for. Warrior Dash was one of the weakest events I have participated in overall. Was it fun? Heck yeah. Was it challenging or well organized? Hell no. For the money I spent, I won't be going back to Warrior Dash. I'd rather spend the money on the aforementioned Lollapalooza tickets. Warrior Dash was a cool festival and the last 300 yards were really fun, but the rest of the course was tedious at best. There are too many other fun and challenging courses out there to do rather than donate my hard earned money to Warrior Dash ever again. At least I got my fuzzy Viking hat to show for it.
Event Rating: 2 out of 5

Did you do the New York Warrior Dash? Share your own rating & review about the event today!