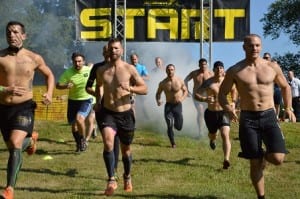 New Jersey based MudManX held it’s second event of the year on August 9th in New Windsor, NY at the sight previously used for Survival Race, Cousins Paintball. With this location having a mixture of permanent structures and those brought in by MudManX, the course was slammed packed with obstacles at every turn. The rolling hills through a variety of different terrain was challenging enough to keep your heart pounding through this 3.1 mile course. As with their first event this year, the competitive wave consisted of 2 laps, which once again made more than a few racers (myself included) collapse in exhaustion after crossing the finish line.

There was plenty of parking within a short distance of the entrance eliminating the need for a shuttle or other inconvenience. Registration was a breeze and there was never a significant line of people waiting for packet pick up. Your shirt was given to you with your bib so you would not have to worry about collecting it at the finish. The cleanup area had enough hoses (and water) so that there was little to no wait to get washed off. Once washed, finishers of age had their choice of several different beers to celebrate their victory. The DJ played music for those who wished to hang around and party or run a second lap (which was actually encouraged by MudManX employees). In addition, there was the typical merchandise tent which was filled with tons of MudManX branded apparel. 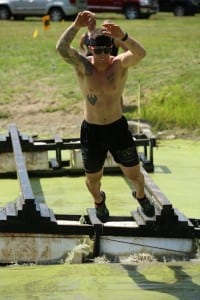 Open waves ran throughout the day filled with racers of all experience levels. Photographers were strategically placed at all the major obstacles taking more than enough pictures of each racer. There were several unique obstacle such as a “frog hop” across water, which consisted of sinking platforms. To cross these, the most effect way was to actually frog hop, since crossing them standing was close to impossible. MudManX also created a 3-part floating balance-beam which bobbed up and down as you crossed it, adding increased turbulence if other racers were on it at the same time as well. The course was filled with wall and rope climbs which were combined in unique ways to continually challenge you and wear on your upper body. 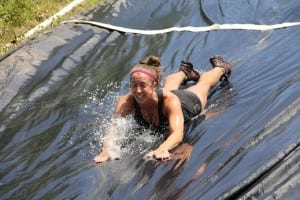 What separates MudManX out from others like it, is their ability to adapt to the needs of racers at all experience levels. It’s obstacles are not impossible and can be completed by most people who attempt them, but are unique enough that experienced racers can still enjoy them. It does not follow suit of other larger OCRs who design some obstacles to have high failure rates or wear your body down through an extremely taxing task. This is a perfect entry level event for those new to mud runs, however, for those with more experience, the competitive wave was designed to push you long enough to wear you down. Their cash prizes and XRacewear giveaways attract a decent amount of local competition. With MudManX now being a qualifying race for the OCR World Championships, this was an excellent opportunity to lock down a top 10 age group finish in either the 5 or 10k race.

Did you do the New Jersey Mud Man X King of the Mountain? Share your own rating & review about the event today!