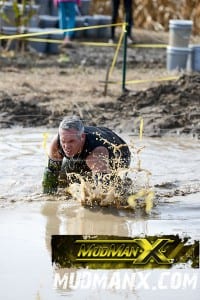 At this point of the season on the east coast, warm OCR’s are a thing of the past at least until next spring so I knew this was going to be a challenge just due to the weather. I figured it was smarter to run later in the day as at least then it would be a little warmer, but even at 11:30 AM it was only about 45 degrees out. I was impressed by the turn out for such a cold day; they visibly had a very good turnout both young and old. It was nice to see a lot of families out for the day and really excited to have a good time regardless of the cold. I also saw some of the hard core OCR regulars made it to the event. Even my favorite OCR photographer Bob Mulholland made it to this event with a white plastic garbage bag covering his broken fibula which he broke doing the “Electroshock” obstacle at the Tri-State Tough Mudder a few weeks earlier.

The course was built on an existing area that was set up for haunted tours and cornfields and MudManX was able to take advantage of this and include both the cornfields and some of the permanent structures in the course, we had to go into a trailer and as well several man-made buildings during the course which added to the fun and improved the Spooktacular aspect of the course. As noted above, I opted to run the course at 11:30 AM which also happen to be the family run so I was running with a lot of kids and parents. The event offered the option of wearing a belt with three flags as the course had zombies that would attempt to take your flags. I decided against wearing the flags as I was worried about my bursitis in the cold and didn’t want to make it much worse.

The course offered two options, a 3.5 mile course and a 1.5 mile course. I decided to run the 3.5 mile version. I was impressed to see how many of the families opted to take the 3.5 mile version with younger children and it was funny to watch the parents trying to keep up with the little kids that were running full speed and not slowing down.  The course had zombies throughout the 3.5 miles and in a few places they worked in teams of two or three and would be waiting on parts of the course that forced the participants to funnel through parts of the course that made it very difficult for them to avoid contact with the zombies. 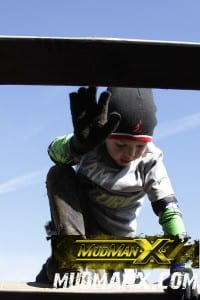 The variety of obstacles were well chosen for a course that was being run by many little kids and potentially first time parents and OCR regulars. The course had several ladder wall type climbs, a slippery wall, a rope climb that was just high enough to challenge you, but not high enough to be a danger if someone fell, a balance beam, an 8 foot fall, which seem to be the one obstacle I witnessed most participants having trouble with, two mud crawls, which in the cold weather had very cold water. The first mud crawl was in the woods part of the course and most of the participants I witnessed climbed over it and didn't crawl through it. It looked silly to see me crawling in the ice cold, muddy water and the other four participants going over it.

The course had a fire jump, they also had a very cool obstacle that you had to jump and then climb over and this obstacle proved to be very challenging for most participants, most of them had to attempt several times to get over it or get help from someone to complete it. The course also had a rope net that was low to the ground that participants had to climb over and it was fun to watch some of the parents complete this obstacle as the little kids were able to crawl right across the net with no issues at all but the older and heavier parents would not have it as easy.

I enjoyed the course and how MudManX designed it to be both fun and a challenge for all participants regardless of age. I also liked that the course was surrounded by either woods or cornfields, as this protected the runners from the direct wind on a colder day. The choice to only have runners enter the cold mud twice was wise and one of the mud obstacles was the very last obstacle of the course so participants were able to have a great photo opportunity and then immediately get next the fire and dry off and warm up. MudManX went to great lengths to create a course that attracted all obstacle course types and I am sure this will not make everyone happy, but to make it in the OCR business, you have to create a course and event that is fun for everyone and not just the hard core OCR athletes. 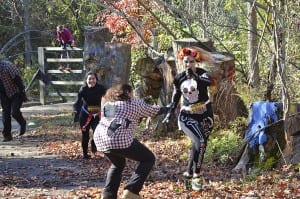 MudManX is known for a course that will have you battle the elements and on this day, we sure did, we had the fire, the water, the cold, and the wind got really bad at the end of the day. The DJ played a great playlist of music that was kids safe and did a great job all day of keeping the crowd hyped up. I really had a blast watching all the younger kids run the course and avoid the zombies and the smiles they had. Any time parents can get kids away from video games and outdoors doing something physical, I see that as a big win for everyone and MudManX clearly provided such an event. I was very impressed with the volunteers which I have now come to expect with MudManX as I myself have volunteered for MudManX in the past and would suggest anyone on a tight budget do the same for a future MudManX event. OCR’s like MudManX & BattleFrog that allow you to run the course for free after volunteering are well worth your time and savings and it’s a win/win for everyone.

The schwag was good, I received a bright yellow finisher's shirt, a dog tag style medal, and in my case this being my third MudManX race of 2014 I received the cool “Superfecta Series Medallion”. 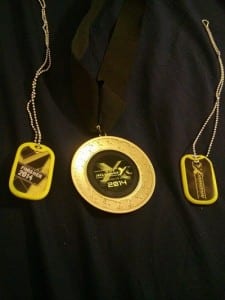 It also happen to be MudManX's CEO Jason Heleotis 39th birthday on race day, so MRG and I wanted to both with Jason a happy belated birthday! You have to admire a CEO that schedules an event on the same day as his or her birthday! Jason is a workaholic and an OCR fanatic, so it comes to no shock to those of us that know him!

I am going to rate the course and overall event a 4.5 out of 5 stars. It was a great day for both young and old and I look forward to running many more future MudManX races.
Rating 4.5/5

Have you done a MudManX Race? Share and rate your experience.