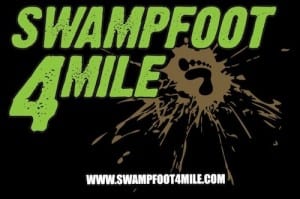 Swampfoot 4 mile is an event held on a full-time farm, with most of the obstacles remaining on the grounds throughout the year.  Held in St. Clair, Michigan; it was one of the few races held in the eastern part of the state.  The course was challenging enough, but if it were held during a Michigan winter, how much more would the challenge be amplified?

Entering the venue was well-organized with volunteers, and military personnel helping the participants file in and park in an orderly fashion.  Another event that donates to many worthy foundations help make this event (like many others) very rewarding for the sport.  Proceeding down a hill into the main event area was easy to follow, and well- marked.  The registration area was somewhat in the back of the arena area, and initially a little difficult to locate.  Another surprise entering the area was the sound of goats penned near to the event.  This is a full-time farm 364 days of the year after all!

The main event area was fairly full of things to do and see for a relatively small race.  A few vendors tents, bag check, and food area was present; along with the main registration tent.  A few other extras available at this event were a tug of war, a monstrous 43 foot rope climb, a salmon ladder, and even a petting zoo!  Farm after all, again.  The additional attractions made this a good event for participants and spectators alike.  The majority of the finishing obstacles were all lined up to the finish line in view from the main event/spectator area. 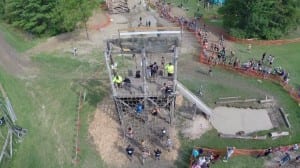 After suiting up, attaching my timing chip to my shoe (this was a timed event), it was off for some warm up and the starting area.  Another event with a great group of people to meet and participate with made the nervous excitement more bearable prior to the start.  Gathering in the starting pen, we were off!

Beginning uphill (what would an event be without a challenge to get you started?)we began our adventure into “4 miles of hell”.  This is the phrase coined by the event, and as it progressed; they did a good job to live up to that moniker.  Shortly into the event, the trees began (as my opening statement ominously promised).  Not the standing trees swaying in the breeze, and providing comforting shade on a hot event day; but an army of downed trees blocking the race path and taunting you to jump over one after another, after another, after another……

Shortly after the first round of the lumber brigade, we encountered the first set of monkey bars.  Seeing how school children glide across them with ease, how difficult could they be?  Well, for one thing, they spanned a creek about 20+ feet across; and a drop of about 8 feet to those unable to navigate them successfully!  Being in the first heat, upon meeting the bars, the paint still retained a good deal of silicate for grip, and that helped to fray the hands of all those greet them early on.  Thankfully I must have mentally reverted back to childhood, and I was able to successfully find my way across them without a complimentary drop into the drink.

The course continued on through the countryside; but with no time to admire the view, the race continued into the wooded areas. 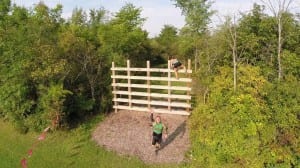 S00n after entering the forest, we were met with a sign stating “Blaze your own path”.  Not a metaphor, but the actual need to cut your own path through a section of the course not cleared and defined as the rest.  We cut and dashed over/under/around and through the trees and plants to emerge back into the sun.  Once out of the woods we were required to ford our way through a well-mudded stream to continue on.  The going was slow with unseen drop-offs, and fairly thick mud to impede our progress.

Not to be outdone by its previous attempts; the timber brigade presented another assault on us.  And just to make sure we never figured out their battle plans; the trees were of different sizes and shapes to literally keep us on our toes.  Passing the onslaught, we encountered a few climbs from a cargo net and a large ladder climb.  Climbing to the top of the ladder wall, we were met with a buzzing akin to a family of hummingbirds that turned out to be a drone flying overhead capturing aerial coverage of the event.  I personally feel that drones can create an amazing perspective to the sport, and to those who have never ran an event before, to really get the experience firsthand. 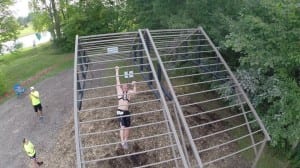 After feeling pretty good at this point in the event, all considering; the next set of monkey bars decided to take an interesting twist.  Like many of the obstacles on this course, you had a “choose your own adventure” approach.  The monkey bars before us began as an incline, and descended back to terra after a good deal of travel suspended first.  For those choosing to “opt-out” of this obstacle were optioned with a quarter-mile detour involving a crawl under some netting.  Success favors the brave, why not go for it?  I will admit that this obstacle really took a toll on my arms, hands, shoulders, etc.  I successfully navigated the obstacle, but it taxed me a great deal.  This was also with a good deal of course remaining.

As the course neared the finish a few rope swings presented themselves.  A convenient log “step” awaited those at the end of the swing to ensure they made it high enough up the rope prior to the swing.  Those not so lucky were met with that log squarely in their flight path.  After this stretch, the final leg loomed as the finish line neared.  Like many events, the obstacles line up for a thrilling finish.  For those making it to this point, there was not a great deal of energy left in the lot of us. 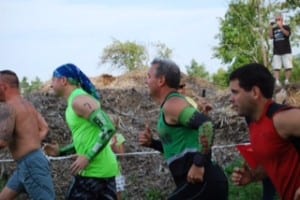 The “fun” preceding the final stretch of obstacles entailed a slide down in to some muddy water to ensure your hands were wet and muddy to climb the cargo net ahead.  Down again, and back into the mud to crawl through some tunnels for the next challenge.  An angled rope/wall climb led to a platform with another water slide.  This time, it was down a tube into the waiting water below.  At this point, it was all in the full view of the spectators; so upon emerging from the water, we were met with a thunderous applause and cheers.  Sometimes its fellow competitors that help you through a race, and at the end; it’s always the spectators that give you that extra boost to push your way to the finish.  The second to last obstacle was a climb to a platform that allowed you the option to slide down a rope or down another slide into more water.  Once this was cleared it was on to a final tarzan swing to the finish.  Mustering all my remaining strength, I dove for the rope hoping my grip would prove true at the 11th hour.  Success!  I latched onto the rope, swung safely across, and made the final dash to the finish.

For an event held at a functioning farm for the majority of the year; and this being my first time running the race, I was very impressed.  The course was well marked, with the spacing of the obstacles very good.  It certainly was a runners course from the distance, and the trees to jump over on the long stretches; so it made sure you knew you were running 4 miles.  The volunteers were a great group of people urging you on at every obstacle, and providing guidance.  Swampfoot 4 Mile is a quality event with well-built obstacles, a challenging course, and a great time.  I would strongly recommend someone interested in a challenge to add it to their race list.

Have you done a Swampfoot 4 Mile Race? Submit your own review…