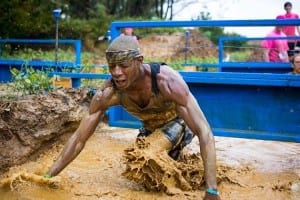 I started the day in Pennsylvania and ran a 5K OCR at 9am and then drove just over a hundred miles to Kennedyville, MD to run Savage Race on the same day. The course, event area, and parking are all on a farm and the parking was not that far away from the main event area. I parked and was able to make my way over to registration quickly. I was checked in fast and was provided my race packet. It was a cold day and the temperature was about 55 degrees with a lighter rain. The first few hours of the day had a much bigger rain storm so the course was going to be nice and muddy.

I got my gear on and checked my bag in with the bag check and made my way over to the start, the latest wave had just been released about three minutes prior to me getting to the starting line so I asked if it was okay to just go now and was told go for it. The DJ was playing really good music and even with the weather being what it was, I still saw a lot of spectators and participants hanging around after they completed the course. 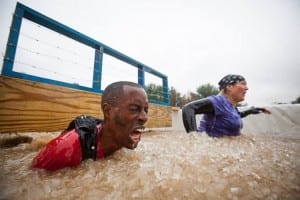 The course started out with trail running for what seemed to be about a mile and I then came to the first obstacle of the course, Shriveled Richard. This was my second Savage Race and I recalled the Pennsylvania race also started with this same obstacle, but that was in June on a very nice sunny day and this time it was cold! By now I had started to see other participants and some seemed to be hesitating when it came to entering the ice tank, I figured best to get it over with and got in as fast as I can. I never jump into these tanks so I sat down and dropped my body in, this got an odd look from the obstacles volunteers. I got out of the tank and now wanted to get my body warm as fast as I can and started running at a faster pace.

I knew the course was just over six miles, so I was trying to set a pace I thought I would be able to maintain the entire time. I was enjoying this course as it was a combination of several kinds of terrain, the course was sometimes on well packed dirt and not in the woods, and then you would find yourself in the woods. A good part of the course was carved into cornfields and I the mud in these fields was pretty loose and heavy. Running in the cornfields was much harder than running on other parts of the course. I saw a lot of participants gassing in these fields and brought to a slow walking pace.

This was my second Savage Race so I had seen and completed a lot of the obstacles already. I am one of the very few crazy people that actually enjoy the electric obstacles so I was disappointed that I wouldn't be able to complete Tazed as it has been removed and replaced with an obstacle called Block Party, which is a cinder-block tied to a rope and you have to drag it do you and then carry it back. They used it in Georgia and the feedback was it was too easy and light, so for this event they filled the block with concrete to make them heavier. I didn't think dragging or carrying the cinder-block was that hard, but to be fair, it rained all day so the ground was really wet and didn't offer as much resistance as it would on a dry sunny day. I think the new obstacle was a wise choice and I can understand why they made the decision to remove Tazed (will explain later). The course had all its signature obstacles, Davy Jones' Locker, Colossus, Nutt Smasher, Sawtooth Bars, Slippery Incline Wall, and Thor's Grundle to name a few. 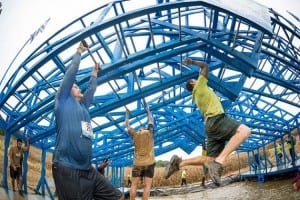 The rain and cold made some of the obstacles a lot harder and more of a challenge, obstacles like the Slippery Incline Wall, Colossus, and most of all Sawtooth Bars & Pipe Dreams where much more slippery.

I was happy when I arrived to Davy Jones' Locker as I don't consider that an obstacle. I was going to be doing Tough Mudder in NJ the next day and one of the highlights of the weekend was the fact I would get to do two cliff type jumps in one weekend. I got to the end of the plank and made sure my waterproof headphones where secure and then asked the volunteer to tap me on the shoulder when I could jump. She tapped, I jumped doing a double bicep pose on the way down!

One of my goals of this course was to not walk almost at all, I may not have been running fast but I was running! Between the above mentioned terrains and over 20+ challenging obstacles the course really was a great test for me (especially considering I ran another 5K OCR earlier in the morning). When I knew I had about a half a mile to go I tried to pick my pace up faster, I was thinking I am going to have a good time on this course. I stopped on several obstacles to help others and that had cost me a good fifteen to twenty minutes, but I still felt like I was bringing home a good overall time.

I ended up finishing the course with a time of 1:39:08 which placed me 153rd overall with roughly two thousand participants/finishers. 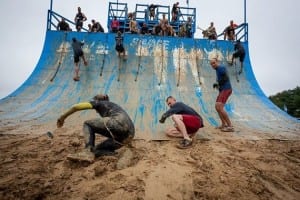 After the run, I spoke with Event Operations Manager Sean Wolters. The first thing I asked him is why they removed Tazed. He explained they had asked previous participants, which obstacle was the least liked and Tazed was picked by well over 90% of them. Sean was happy with the turnout considering the massive amount of rain and how cold a day it was. It should also be mentioned the Baltimore Orioles played the night before in the ALCS and the game went pretty late, so I wouldn't be shocked if some participants ended up to tired to come the next day.

This was my second Savage Race and the reason I was willing to travel as far as I did was I enjoyed my first one this summer in Pennsylvania. This course was way better than the Pennsylvania course in every aspect, and in fact is in my top five list of courses I have run this year.

The schwag was good, I received a new and different medal then I had gotten a few months earlier in Pennsylvania and as well a new designed finisher shirt. Savage Race also gives car bumper stickers away for free which I have always thought was a smart move and a nice touch.

I am going to rate this event/course a 4.8 out of 5 stars. I am really looking forward to Pennsylvania, New England, and both Maryland Savage Race events next year.

Have you done a Savage Race? Share and rate your experience!