The third annual “Panic in the Dark” run was held recently in Lowell, MA. The “zombie” obstacle course race is produced by SmithFest Events, a local company known for its creative and original events. Panic in the Dark differs from other zombie-themed races in that it doesn’t require wearing belts and having zombies chasing runners in an attempt to “infect” them. The event also occurs at night which helps to heighten the spooky vibe. Armed with only headlamps, runners are released into the dusk and attempt to avoid the hordes of realistic-looking zombies that are strategically located throughout the course while also navigating a variety of obstacles. Recently named as one of the eight best Halloween races in the country by Runners World, Panic in the Dark far exceeded expectations last year and we were excited to see what awaited us in the darkened woods! 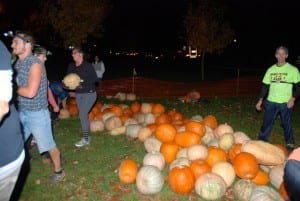 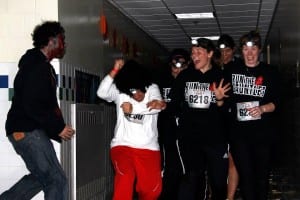 The event returned to the spacious Lowell Memorial Auditorium. Free parking was conveniently located along the neighboring side streets. City lots were also readily available for a minimal fee. For $15, spectators were also able to join the festivities which included a shuttle to the viewing area, free T-shirt and access to the after party.

We arrived at the Auditorium about 45 minutes before our wave time. Registration was a breeze. After flashing an ID, we were handed our racing packet and directed to the T-shirt table. Similar to last year, the biggest team received customized T-shirts with the team logo on the back instead of the typical sponsor logos. A small token of appreciation that goes a long way! I wish more races would make a similar effort. There was also a complimentary bag check setup next to registration.

Unfortunately, the forecast called for a cold and rainy evening which definitely impacted the event. A themed race such as this is greatly dependent on the volunteers and zombies. However, the dreary weather dramatically reduced their numbers, creating an unfortunate circumstance that simply could not be avoided. While limited, the zombies that did make it to the event were awesome!

After our wave time was announced, we headed down the hall to receive our headlamps. After a quick safety briefing, we were directed to a shuttle bus. Missing was the tension of last year when zombies spilled out of the closets and the military dressed in riot gear rushed participants through the auditorium hallways with shrieking zombies at every turn and loaded us on the bus. The theatrics did begin when we were greeted at the starting line by a “gang” of masked men. After the dramatic “sacrificing” of a random runner, we were sent off into the darkness. 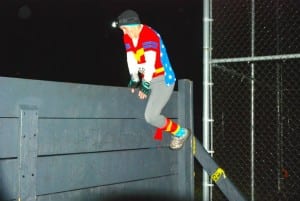 The course winded through the zombie-filled woods of Fort Hill and Shedd Park and also along the boundaries of a cemetery which added to the apocalyptic setting. The technical trails and various hills proved difficult to navigate with only a headlamp to light the way. While not incredibly difficult, the obstacles added another dimension to the event. Included were various walls, tire drills, human spider webs, open grave leaps and a festive pumpkin carry. The teeter-totter, made slick from the rain, proved to be the most challenging. New for this year was an unexpected slip-n-slide located right before the finish line. 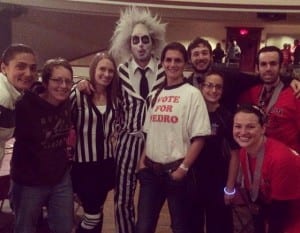 The main emphasis of the event lies in the atmosphere and theatrics including a zombified Christmas scene, a broken down school bus filled with hiding zombies, whirling sirens from a car accident and being chased by chainsaw wielding maniacs. There were also a few new wrinkles added this year. In an attempt to confuse runners, there was a “fake” finish line located about halfway through the race. The highlight of the night was when the course veered towards a local school. After waiting a couple minutes to collect more runners, we were sent into a dark gymnasium overrun with zombies. Without any signage directing people and gunshots echoing throughout the corridors, we were on our own to find the way out. All incorrect paths led you back around to try again. Originally thinking it was a mistake, it became obvious that this was a creative attempt to confuse runners. The hallways were filled with snapping mousetraps, snowy television monitors and squealing zombie children. Well played!

After collecting our medals, we headed back to the auditorium for the Brain Bash after party. Many participants were disappointed when informed that a complimentary beer was not included this year. Also, unlike last year, there was no food available for purchase, just overpriced beer. The high energy band entertained the crowd throughout the night. They also had costume contests for runners and zombies. My Beetlejuice costume actually took first place! While the weather played a significant role in this year’s event, I was impressed with the brave zombies and volunteers that helped make it a success. The people at Smithfest have always provided quality events and I have no doubt that next year’s Panic the Dark with be better than ever!

Have you done Panic in the Dark? Share and rate your experience!