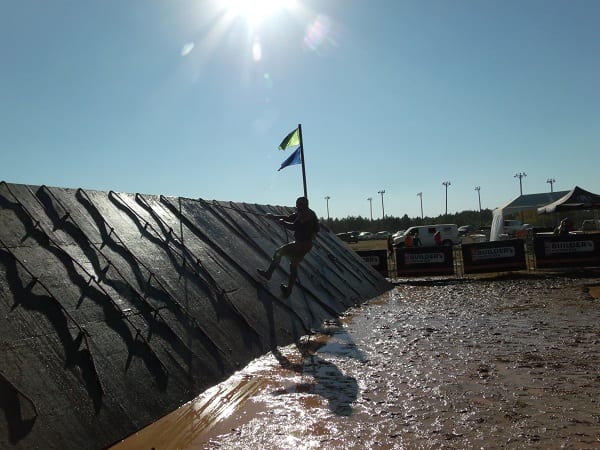 I could tell right away, the day was going to be much sunnier and hotter than the previous day in Ohio at OCR World Championships and I knew hydration would be a key for this race. I opted to wear my CamelBak hydration backpack and carried extra GU gels with me. I started the last wave of the day. From the beginning of the race I tried to keep the best pace I could muster. This was my first race In South Carolina and I could tell right away that the majority of this race would be run on a hard packed surface. It didn’t take me that long to get to the first obstacle “Over and Under” which was a nice obstacle to start out with on such a warm & sunny day. Shortly after the “Over and Under”, the course went into a woodsy part of the trails which protected us racers from the direct sunlight. 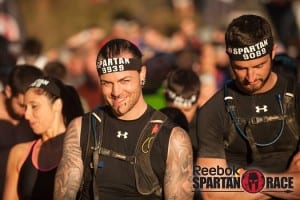 I made it to the one mile marker faster than I expected. The second mile of the course included several uphill and downhill climbs, but at least the majority of these were done in the woods (protecting us from direct sunlight). I came to the next obstacle “6ft Wall” and I was able to get over it with no problems. If my memory recalls the next obstacle I came to was a barbed wire, mud crawl which had a very foul smell. I then proceeded to run for a while and came to the “Balance Beams”. I was now starting to feel the lack of sleep, weather and the day before taking its toll on me, which made the “Balance Beams” crossing interesting. A short time later I came to the ‘Tractor Pull” obstacle and as I typically do, I dragged two concrete blocks without much difficulty.

I am pretty sure the next obstacle was the “Atlas Ball” which, due to my bursitis, makes the five burpees the hardest part so I carried the ball to the one side and proceeded to do five very gimpy burpees. I then came to the “Log Hop” obstacle and was able to quickly clear all the logs! Up next came the “Tire Drag, ” which has never been a problem for me. I then started approaching the festival area and came to a series of mud pits that I went right through, followed by the “Over-Under-Thru” obstacle. This part of the course had us out of the woods and back in the hot sun with zero tree coverage. After a very short run I came to the “Monkey Bars” which surprisingly, for an extremely warm day, were extremely muddy and wet. I was still able to complete this obstacle with two sore shoulders. 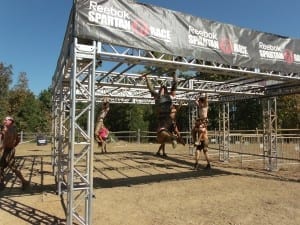 Immediately after the “Monkey Bars” was the “Traverse Wall” which I completed while being forced to listen to a country music song being blasted on the festival area event speakers, lol. I then came to the “Spear Throw” and attempted one of the first hay bales in the line. I hit the hay bale and the spear appeared to go deep in but just fell to the floor, the volunteer was awesome and explained the target I had selected had lost a lot of its hay, which was making it very difficult for the spear to stick, so I dragged the spear back and tried a second time, yet again the spear hit an area of the target that typically it would stick in but this time the spear went through the target and landed on the floor once the rope came to its end. The volunteer was awesome about it and explained that he considered both my throws to be successful. I started to make my way out of the spear throwing section, but didn’t feel right about the spear not sticking, so I stopped at one of the furthest targets and tried again, this time nailing it dead center in the hay bale and having it stick firmly. Now I was able to leave this obstacle feeling much better about completing it successfully and having a learned a lesson for the future.

The next obstacle that came up was considered classified, but was the “Sand Bag” carry. Like I typically do, and with this being part of my Triple Trifecta and wanting to go all out I carried two of the heavier sand bags. Although it wasn’t super easy (the heat was getting to me), I did complete the obstacle with both two sandbags. I then came to the “8 Foot Wall” which I was able to climb over without any help, which brought a compliment from the volunteers who said to the other racers: “That’s how you climb a wall!”. Up next was the “Bucket Carry” which, definitely, this late in the race and the sun as hot as it was, was taking a toll on all of us racers. After completing the “Bucket Carry”, I knew I had about a mile left of the course, so I tried to pick up my pace to a little faster than that of a turtle. 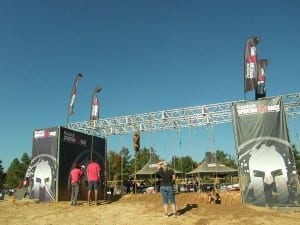 I then came to what was my favorite obstacle of the day, the “Swim”. I approached to see how deep the water was after the initial step and could tell it was easily three feet deep. This meant I could do a modified dive/belly flop into this water. I informed the lifeguard I was going to do this and with a running leap, I dove/belly-flopped into the water (DO NOT TRY THIS AT HOME) while screaming Hooyah!. I proceeded to swim about half of the water crossing on one breath before coming up. When my head came out of the water I was welcomed by huge cheers and clapping by all the racers, volunteers and staff at this obstacle. This inflated this old man's ego! I then made my way to “Herc Hoist”, which has always been an easy obstacle for me and I was able to pull the two bags up and back down within seconds.

Up next was another obstacle that was marked classified, but as you can tell from the picture, can easily be called the “Mud Pit”. At this point I knew the course was almost over so I decided to go all out and swim across the “Mud Pit”. Which brought applause and cheers from all the onlookers when they realized it was deliberate. I breast stroked almost the entire way across and proceeded to exit the “Mud Pit” with at least an additional 50lbs of mud on me. I then took my time to slow jog over to the rope climb, trying my best to clean as much mud off as I could. Being late in the day, every single rope I looked at was soaked and covered in mud. I didn’t see a single racer during the time I spent at the obstacle successfully climb to the top of the rope. It definitely was not easy as the ropes were wet and slippery. However, with a combination of strong determination to not fail and climbing technique I was able to make it to the top of the rope with onlookers cheering me on and ring the bell. I shimmied halfway down the rope and then deliberately let loose and hit the water, which still didn’t dislodge all the mud from the previous obstacle. 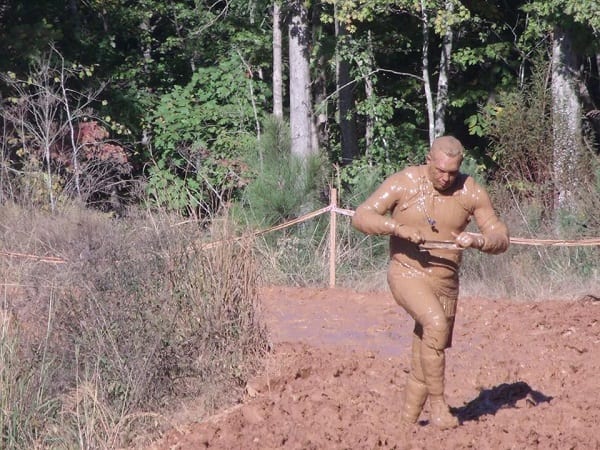 This was immediately followed by the “Lattice Bridge”, which I was able to complete with no problems. Up next were a few obstacles not listed on the course map. First was another “Barbed Wire Crawl” and then the “Underwater Wall”, which I held my breath for a while and enjoyed a brief moment in the cold water before coming out on the other side and making my way to the “Slip Wall”l, I grabbed the knot-less rope and climbed over the wall and then went on to jump over the not so fired up “Fire Jump” with the agility and grace of a rhinoceros to finish the course.

To date this was my seventh Spartan Race of the year, and overall, it was my second favorite Spartan course of the year. I also felt the volunteers at this South Carolina event were from start to finish the best group of volunteers of any the previous Spartan Races. They were all very polite, encouraging and offering good coaching to those struggling. My only disappointment of the day, was that I observed a lot of racers skip obstacles and not do the penalty. It pains me to know that they got the same medal as those of us that gave everything we had and left it on the course that day. Those people know who they are and they have to live with that. 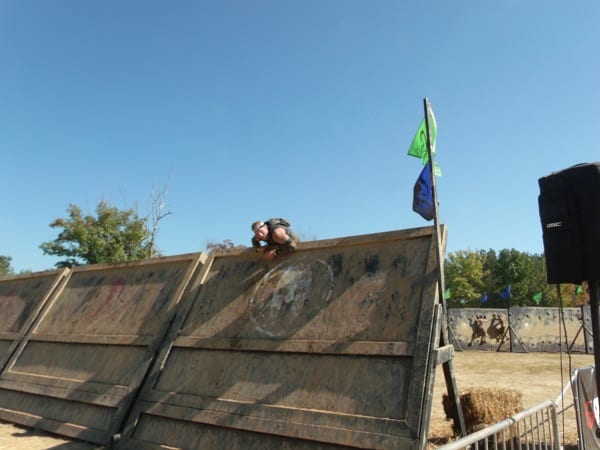 Did you do the Spartan Super in South Carolina? Rate and Review your Experience!