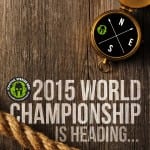 On December 6, 2014 Spartan Race dropped the hint online that the 2015 World Championship Race would not be in Vermont for the upcoming year. Without any words or explanation Spartan Race dropped a photo that had many talking. The meme simply said “2015 World Championship Race is Heading…” This left many in the community wondering and yesterday the second piece of the puzzle was revealed with a second meme, stating “Her desert, her mountains, and yes, her beaches…” from Frank Sinatra's song California. While nothing is confirmed it looks like the Spartan Race World Championships will be headed West for next year with a new location and new venue.

Now the question on many people's mind is where in California will the new Spartan Race World Championships be? Many have already speculated a move to Tahoe which would fit with the latest photo however other speculate they may revamp one of their Temecula Race. We will have to wait for the official announcement before the OCR world starts to plane tickets. Contrary to popular belief this would be the third location for the Spartan Race World Championships in the five plus year history of the race series. While many are claiming moving the World Championship is messing with tradition it's home was not always Vermont. 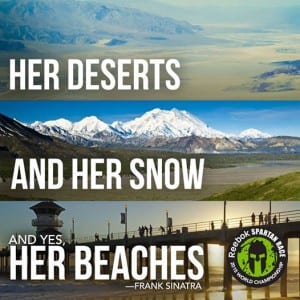 In 2011, Spartan Race announced it would hold a World Championship Race at the end of the season in Glen Rose, Texas. The race would be in December and would be the first Spartan Race that any prize money was awarded. The winner would take home $10,000 and second place a trip to the World Championships in 2012. The race distance would be a Super Distance measuring about 8-miles. Unlike other races the “elite” then called competitive heat would be the last of the day to race. An idea that was quickly scrapped after the one attempt. Hobie Call would take home the title for men and Jenny Tobin would make debut on the OCR scene capturing the women's title. Earlier that year, in August, a new race distance was quietly tested in Vermont that race would be the Vermont Beast in Killington, Vermont.

In 2012, the Spartan Race World Championships moved it's championships to just down the rode from it's original corporate headquarters. After the feedback in 2011 it was apparent that the Vermont Beast was like no other race and would be the proving ground for the best in the sport. It would also be the introduction of the Ultra Beast for those already complaining that the Beast was not enough. In 2012, Cody Moat captured the World Championship title and Claude Godbout took the title for women. It was then that many felt Vermont had become Spartan Race's own Kona and would be THE World Championship site for years to come.

In 2013 & 2014, in the past two years NBC and NBC sports has documented the Spartan Race World Championships in Vermont. Killington has become an iconic site where in 2013 Hobie Call finally captured a win in Vermont. 2013, Amelia Boone handily won the World Championship race dominating the female competition  and becoming an icon in OCR. Our recent 2014 race had the most international competition yet and the UK's Jonathan Albon took top honors capturing a new title and introducing himself to us North America. Claude Godbout proved once again she was a champion winning her second World Championship Title and bringing home the title to Canada.

While it is undeniable to argue that Vermont and the Killington Beast are not special races, the drama, the excitement, and the fear that the mere mention of Vermont drives into some people minds when recounting that race is palpable. But it seems that an era is about to end for the Spartan Race World Championships. It's time for us to look West and to see what is next for the Spartan Race World Championships.

Weigh in with your thoughts in our comment section below and tell us what you think about the move.