In my circle of friends I have often joked with them, “How do you start a fight with a Spartan Racer?… Burpees!”. How many times have we seen on the internet another argument about the proper form of a burpee in a Spartan Race. More than one barstool conversation has become heated over the subject. But until yesterday not many people have had the guts to really put out there what so many in the industry had been thinking. Then Pete Rees, the founder of Mudstacle.com published – Why Spartan Are Not Competitive Races – And How That Can Be Resolved. Before looking at the Mudstacle article it's important to note the origins of the Spartan Race penalty, and nope – it wasn't always the burpee.

In the original races in 2010 the penalty was a simple 20 pushups. Not a hand release, nothing special, just plain old push-ups. In 2011, that changed to 30 modified Burpees, better known as Squat Thrusts. Looking back at old video footage on YouTube people are not all doing a burpee wrong but instead doing the prescribed penalty at the time – a Squat Thrust. Below is the video sent out to racers before the first Spartan World Championships in 2011, featuring Race Director Mike Morris demonstrating what was considered proper form at the time.

The full chest-to-ground burpee would not be introduced to the Spartan Race penalty until sometime during the 2012 season. It varied from race-to-race that year. Spartan put out this video in July of 2012 with the “new” proper burpee technique for races. Although it was not until late in the season that it was strictly enforced for the competitive racers.

In 2013 and up to present day, the penalty for a missed obstacle at a Spartan Race was and still is the chest-to-ground burpee. Signage at times has been confusing (photo from 2013 after Reebok came on board) but verbally instructions have always been chest-to-ground. This burpee has sparked much debate in the last year. How high should a participant jump? Do they have to fully extend up when they jump? Can you just flop to the ground? What is the proper way to do a burpee in competition? Last year with the additional media coverage of NBC Sports, the Burpee got even more criticism with a larger audience now watching what the elite in our sport were doing. Some were outraged at the forms they saw, and attacks were made. We have all seen it, so I see no need to point fingers.  But all in all, participants were hitting their chest to the ground and making sure their feet were off the ground. The two main rules in a Spartan competition for a burpee. Even yesterday, two Spartan SGX coaches argued about “The Perfect Burpee” proving that even among coaches there isn't one answer. 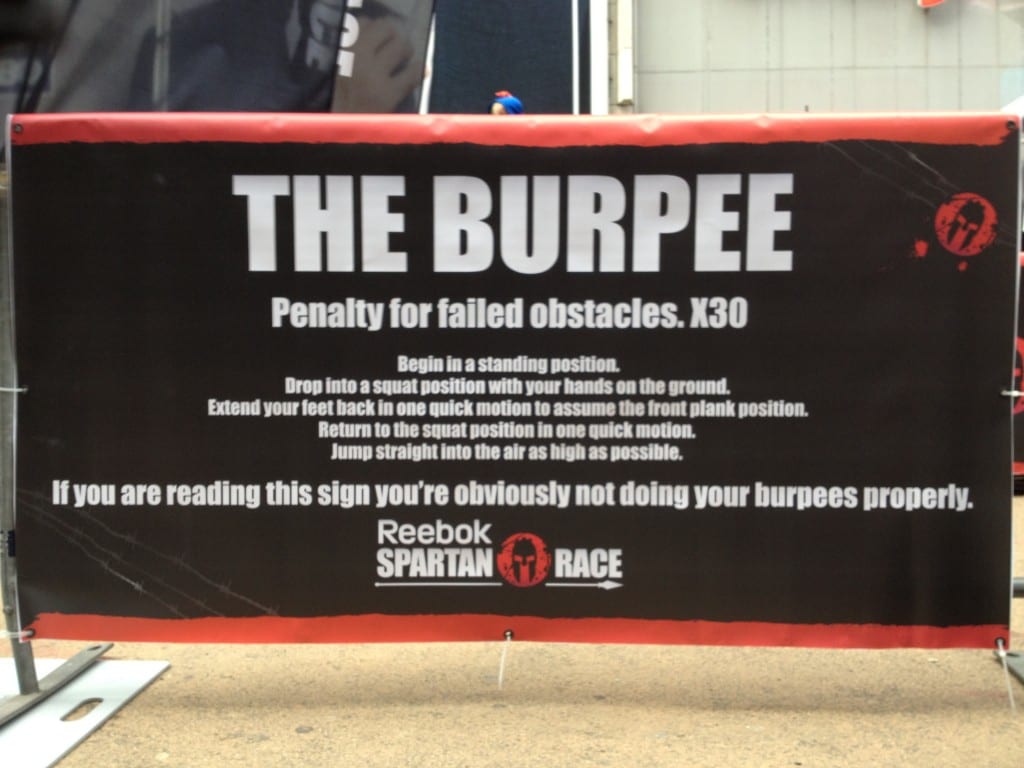 In CrossFit our most comparable sport when talking about a burpee, during competitions these days most participants have to jump over a bar, log, wall, or hit a specific target with their hand on a jump. This has helped standardize the burpee in the CrossFit world and has helped keep it on a level playing ground. Should we in the obstacle racing world adapt similar practices to fit our needs? Is this the direction we should also go? Back to the Mudstacle article.

I can already hear the groans of many in the OCR world. I can hear you saying, “who cares unless they are on the podium and vying for money?” Rees brings up a few key points worth talking about.

I don’t consider myself an “elite” racer, but boy can I be competitive. My position is very important to me, yet whenever I have completed a Spartan Race I feel like I have been done over.

The category he fits into seems to also fit a growing number of people in the obstacle racing world. Rees is in the group that might have races like OCR World Championships on his radar as well as Spartan Race World Championships. Speaking with Rees, he has run in both open and elite waves, but mostly runs in the elite,  giving him a well rounded perspective on the sport. In the US, Spartan Race has beefed up the officiating program and are watching those competitive racers closely, but there is a group within the elite field that aren't watched as closely, and Rees touches on them in his article.

EVERY time I have completed a burpee forfeit at a Spartan Race (which is a lot of times), I have been overtaken by people who have not completed all of their reps (in a lot of cases not even close to the right number, and many times they have been skipped all together). I have had that in later waves and I’ve also faced it in the top 20 of the elite wave.

The glaring issue he brings up is what is happening at the level just below the podium finishers. The racers who are vying for one of those coveted Spartan coins or trying to meet the qualifying standards for OCR World Championships. With the current system, in the US, the top 5 or so racers are now closely watched, are filmed at major obstacles, and video is looked over before the awards ceremony to ensure all burpees are completed. But what about the rest of the elite field, this is where things can happen and the stakes are high. Who is watching them? Spartan would need a whole team in a booth watching each competitor and spend days after a race ensuring everything was up to snuff, it's just not feasible.

Am I a Fan of the Burpee?

Personally, I have nothing against the burpee. I actually get excited when burpee pull-ups and burpee box jumps are part of a workout. I wrote a whole chapter on them in my book. But, I have to agree with Rees on this one. Burpees are not the best penalty for a failed obstacle, as there is too much variation. I do like them, but watching this year's Spartan Race World Championships, I saw an array of questionable burpees even from the best in our sport. Is it their fault or are they just working within the present system? The system has a crack and with more people aiming for championship events at the end of the season at the age group level as well as the elite level this is something to talk about.

Rees brings up a variety of alternatives, many of which are very good. Saying you “must do” obstacles is great. I like it. We all saw it worked well (generally) at OCR World Championships. BattleFrog has also adopted this model of “must-do” all obstacles in their competitive waves. However, sometimes weather and other factors make certain obstacles nearly impossible, and that needs to be considered. Even the pillars of our sport can fall off a log on a rainy day, should they really be disqualified for that?

The one simple implementable option that stands out, is a penalty loop for each missed obstacle. This is what World's Toughest Mudder does, and after competing there with the penalty loops in both 2013 and 2014, this appears to work. The penalties matched the obstacle and were unique and different. They required you to carry a cinderblock in a circle, or drag a pallet with rocks on it, crawl under additional barbed wire or climb over some small walls. They took more time than the obstacle, but there was very little wiggle room as to what the penalty was. Honestly, they were sort of fun as well. The participants got to do more obstacles, which is what we come for right?

The burpee is the tip of the iceberg when it comes to the problems with the competitive side of Spartan Race. As last year showed with “bucket gate” there are many differing opinions of what obstacle racing is or should be. As our sport of OCR continues to grow we often look to Spartan Race as a metric to gauge other races performances. Spartan Race wants to be the leader of the sport, but also wants to pull people off the couch in this fitness revolution. Herein is where things often get muddled. People have varying views on what a Spartan Race is to them.

Last year, I proposed a new structure in the article “A New Structure for Obstacle Racing”. Essentially, it would set up three levels of competition for race day – Elite, Competitive, and Open, offering everyone a chance to race at their desired level. This system is not without it's issues, but as we have more and more people looking to gain entry into championship events, as well as those who care about their rankings, we need to talk about how we further our sport.

We are a young sport and still trying to find our way in the greater sporting arena and it is time to have open and honest conversations. We need to look at both the good and the bad in our sport and continue to push ourselves to be better. The decisions made today can effect the longevity of not just Spartan Race but the entire OCR industry in the long run. The leaders need to look at the systems in place and decide if some are outdated and creative solutions to elevate the entire industry.

5shares
Disclaimer: The viewpoints expressed by the authors do not necessarily reflect the opinions, viewpoints and official policies of Mud Run Guide LLC, or their staff. The comments posted on this Website are solely the opinions of the posters.
By Margaret Schlachter|2015-12-04T14:52:17-05:00February 24th, 2015|Op-Ed|6 Comments