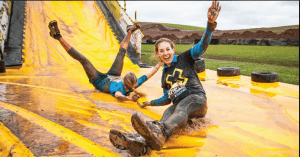 This was my first of two obstacle course races in the UK. I was excited to be doing my very first international OCR. The first thing that caught my attention was the amount of participants that were at this race, it was a very cold Saturday and the day before one of the premier OCR’s in the entire world in Tough Guy, yet Xrunner had a turnout of over three thousand racers. I talked to a large group of men that were running the OCR together and they explained this was going to be the first OCR for any of them.

The race started out on a Moto GP racetrack and had us running for the first few minutes on the race pavement. The first obstacle that came up was a Tyre (tires) hurdles that were fun, but not too difficult to cause long delays with the larger group of runners on the course. The next obstacle was “Gravel Rush canyon” which was very heavy on my feet and used far more energy than expected with both the gravel and climb an obstacle made of tires. Up next was an “inclined walls” obstacle that had three versions, and opted for the most challenging one. I then came to a “Cargo Net Crawl” obstacle.

The course consisted of several obstacle types being encountered more than once;  another  “Tyre (tires) hurdles” obstacle appeared that had racers climb up and over an obstacle built out of tires. This was followed by “Commando Crawl” which was no different than the typical mud crawls we do in America. Then came another “Commando Crawl” obstacle. Next up was the “balance beam” obstacle which was a challenge because the beams where wet, muddy, and starting to have ice form on them. 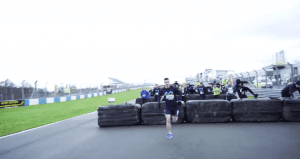 I then had to attack the “Mud Mile” which was the very first time I ever had a sneaker come off due to the mud (think it was due to wearing a thicker neoprene sock). The mud was deep, thick, and heavy, and was a good challenge on a bad back. It was now time for another crawl, this time under “barbed wire”. I then came to a “fire jump” obstacle, which I enjoyed the chance to get some heat on a cold day. Up next was the “Mud Mountains” obstacle which took some effort in the thick, cold, and deep mud.

The second half of the 5K included a lot of fun and challenging obstacles that with colder weather made for more of a challenge. One obstacle I cannot go without mentioning was the “wall traverse”, which also had three versions and the hardest was a good challenge.

Near the end of the first lap, I came to a “Water Slide” obstacle that had me climb up a large structure and then slide down a water/ice slide.  I only had two obstacles left for the first lap and now in even more pain, limped my way to complete lap one. I finished lap #1 by completing the obstacle “Avalanche”, which had us slide down a big tube that was a mix of both running water and ice. My main objective for running this race the day before Tough Guy was to test out my gear in similar weather and I knew I would enter water at least one time on the course. 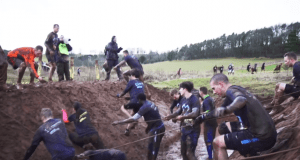 The course was a fun 5K and not that much different than a lot of the OCR’s we have in America. Thirty two obstacles over the 5K distance was a challenge (even on a warm day). I am happy I went and ran this race and, and other than hurting my back, it did boost my confidence for Tough Guy. It’s impressive how many showed up and ran the race and it’s easy to say that people in the UK have the OCR bug just as much as those of us in America.

The only suggestion I would make, is regarding running the 10K version of the event, it’s a loop of the 5K course which was fun and a challenge, but those of use that opted to run the 10K received the exact same medal as those that ran the 5K. I personally feel a different medal should be awarded to those that ran the 10K to distinguish our accomplishments.

The schwag was sweet; I received a nice finisher medal, an athletic t-shirt, a silicon wrist band, a string bag, a bottle of water, and a re-usable hand warmer (which came in handy on a very cold day). They also provided every finisher with a disposable heat retaining foil blanket. 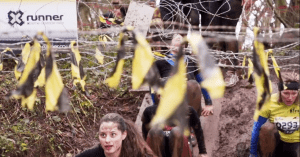 I really enjoyed the course and amount of obstacles that covered the 5K. Xrunner used the same or similar obstacles more than once, but that is not always a bad thing and worked well with the terrain and cold weather. The volunteers were all very polite and helped whenever called upon. I am going to rate the event a 4.7 out of 5 stars. Chances are I won’t ever get another opportunity to do another Xrunner race, but I would love to run one of their summer events.

Have you participated in an Xrunner Event? Share and rate your own experience…