I started the last wave of the day at 2pm with mostly volunteers as this was the volunteer wave. It may have been the end of the day, but Spartan pre-race announcer Dustin Dorough was able to recite his pre-race speech without missing a beat and faster than ever. 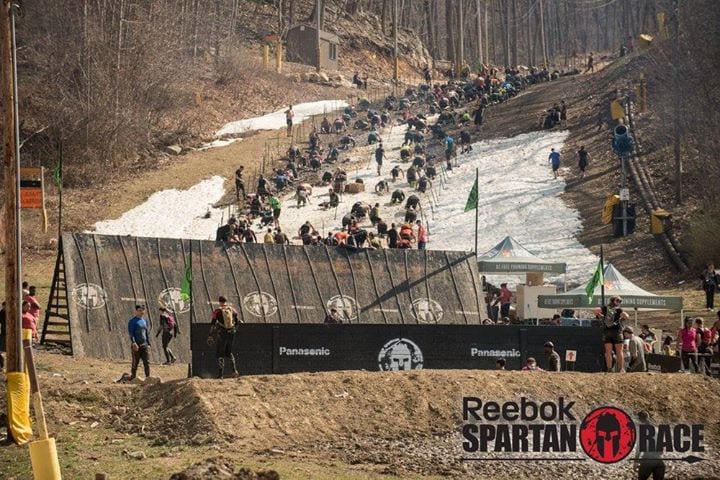 The course started out with a long trail hike/run up the ski mountain. The first obstacle was a fair distance away and was over walls. Up next came hurdles, the next of the 32 obstacles worth mentioning was the log hop obstacle, then came the obstacle O-U-T, followed by Multi-Bars. For the most part very few obstacles were bunched together and near each other, so most of these obstacles would be performed and then it was time to hike/run/walk the trails some more. Not long after the Multi-Bars came if memory serves me right the Hercules Hoist. After more trails up next was the spear throw, which seemed to be the shortest spear throw I have seen at any Spartan event, it may have just been me, but the hay bale target didn't seem as far as away as it normally has. I was able to nail the spear throw and get back on my merry way. Next up was the Clif Monkey bars which hasn't changed at all for this year.

I am pretty sure, this point the course took racers on a long, and at times, treacherous woods hike. I was about half way into this part of the trail course when I came to an injured racer. I questioned both the racer and the people that were with him and they explained he was having pain throughout his entire leg and hip and he had been down and in severe pain for almost an hour. They explained many racers had come by and each time they said they would send help. I assessed the situation and the terrain and decided someone needed to take control of the situation. I told both the injured racer and group of people that were with him we needed to fireman carry him out of this hard section and to a spot that medical would be able to get to him. We proceeded to fireman carry the injured racer out and to flat ground. As fate would have it, help arrived right as we were exiting the treacherous woods. We handed the injured racer off to them, and even though he was in great pain, he insisted his two friends keep running the course. I cannot go without mentioning the other group of guys/friends that helped me get this injured racer out of harms way, they didn't even know the guy. Two of them were dressed like Power Rangers and they were all from Long Island. These guys rock and I am sure karma will pay them well ten fold!

After a few more obstacles I was approached by a 22-year old girl running her first Spartan race who I had talked to a few times earlier in the race and she asked me if I would stay with her the rest of the way, I agreed and off the two of us continued. We came to the 7ft wall obstacle and both of us made it over just fine. After a short trail run, we then came to Barb wire crawl # 1, we crawled through with very little problems and I made a comment that this was the easy barb wire crawl of the day, which caused a lady next to us to threaten to hit me with her walking stick (lol). After some more deep woods hiking trails, we came to the Sandbag carry which wasn't so bad but still a challenge. Now came time for the memory test, which we both got correct. 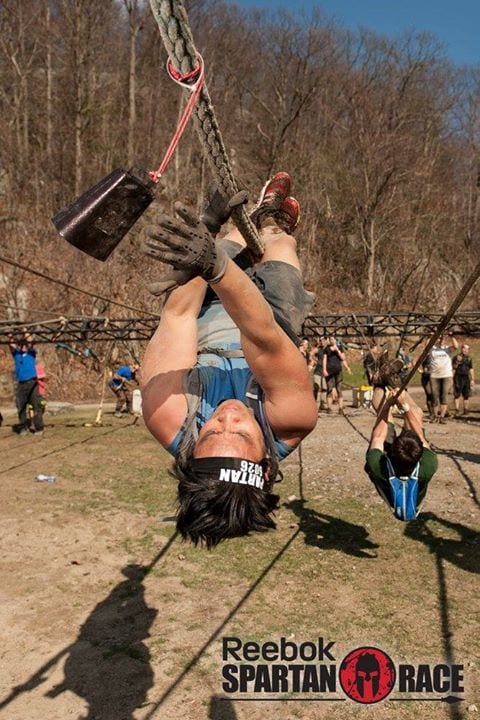 We made our way back up the mountain, in the woods and this a part of the course wasn't a killer incline. Up next came and inverted wall which I hopped right over and then helped my partner complete. Up next was a Tyrolean Traverse, the traverse was not worthy for a Beast course, I noticed a lot of people on Social Media commenting it was the first time they successfully completed this obstacle and the reason for that was it was way shorter than normal. They didn't have this one over a body of water like they typically do so I can only think it was designed the way it was for safety reasons, but this was a Norm Koch designed course with a very non-Norm type Tyrolean Traverse. Up next came the A-Frame Cargo obstacle, up next was a water crossing in very low water. Also in this part of the course was an obstacle that had racers climb through a metal tube that you could stand in and use a rope, with my Icebug Zeal's on, I didn't even pick up the rope.

We then proceeded to go all the way back down the mountain and for the first time all day next to the festival area and only area spectators for the most part could be, just before we got to the bottom, we had a large log flip obstacle and then headed down and right aside the festival area where we had an 8ft wall obstacle which I was able to get over on my own and then helped my side kick get over it as well. The two of us then made our way over to the Dunk / Slip Wall and I went in and under the water with no issues (I mean this wasn't Tough Guy in February!).

Up next was the second Barb Wire crawl, which I have to admit was brutal and everyone's hands and knees were frozen before even the half-way point. The only good thing about this obstacle was my very good friend and photographer Bob Mulholland was taking pictures on this obstacle and got to see him and say hi! At this point, we had to completely go back up the entire mountain and my side kick was very unhappy about this. We made our way to the top of the mountain at a pretty slow pace as she just had nothing left in the tank and then made our way down the mountain almost as slow. The very final descent down the mountain was through some loose rocks and stones, but nothing racers couldn’t handle. The second from last obstacle was a rope swing across water that was now cold as it was dark out, and then came the familiar fire jump to strike a pose and bask in the glory of defeating the Beast and if I recall just after that was one last in water muddy water obstacle and out and across the finish line we went.

The course was nice, but it really just felt like a longer version of last year’s Tri-State Spartan Super on the same mountain and venue. Spartan really hyped this Beast prior to the race via Social Media and it just didn’t live up to the expectations created by that hype.

I also heard reports that racers saw a bear around mile marker 13 and have also seen at least one photo surface on Social Media that is maybe real. I am a bit shocked the race was allowed to continue with zero delays or stoppage with a bear sighting on the course and so close to the festival area. Typically bears are not a social animal and for them to be so close to the festival area with music blasting and racers racing seems out character for most bears and could have turned out to be a very dangerous situation.

I also cannot go without talking about my ordeal with helping an awesome group of guy’s fireman carry an injured racer out of one of the more treacherous parts of the course. It shocks me that someone could be injured and laying on the course for almost an hour. I stopped at the very first area that had Spartan staff and volunteers, just after we carried the injured racer out of the woods and to a spot medical could get to help him and asked them when they were first notified of a racer being injured. I was told only about five minutes before my arrival to that point. I cannot believe that so many racers could have passed an injured person and then either forgot or just didn’t bother to let the Spartan staff know of the injury. Either the staff/volunteers I talked with were not being honest or many racers just really dropped the ball. I want every reader to know, that is just not acceptable, if you see someone injured on the course, you need to make sure you advise the events staff and insist they send help ASAP.

I hate to sound so negative, but I need to voice all the points I see for improvement. This specific venue is not one that is spectator friendly as they do not have the chair lift in operation and very few of the obstacles and course are in sight of the festival area. I personally do not think it is fair to charge the typical $25 for spectators at this event. Both the Blue Ridge, PA Spartan venue and Killington, VT Spartan venue had a means for spectators to get up and around the mountain and it's a shame the same isn’t true for this Vernon course.

I promise this is my last suggestion for improvement. I personally was never at risk of checkpoint / time cut offs (even after spending a good 45 minutes helping fireman carry the injured racer), but some of the volunteer heat racers after volunteering all day where and it just seems unfair and a bad business practice that some of these hard working volunteers were potentially stopped from completing the course. Volunteers are a major part of the reason these OCR companies can put on amazing race/event time and time again and they need to be a taken care of always. 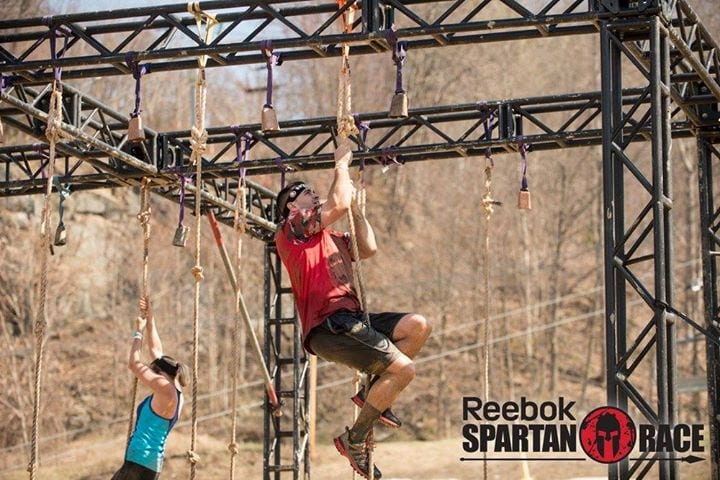 The new designed medal for 2015 is a nice one and I am happy to add it to my medal collection. It is also a very nice touch they went away from one generic finisher shirt provided for all three course versions and now have one unique to the event.

Based on the pre-hype creating an expectation this Beast would be better than Vermont’s, the threat of a time cut off to the volunteers, and spectators having to pay for admission and having very little viewing of most of the course and obstacle I am going to rate the event/race a 4.4 out of 5 stars.

The race/event was fun and I was very critical of some parts of this race, but it was still a good time and some of the new obstacles Spartan have either added or modified have made for a better course. I am going to be doing a lot of Spartan races this year and hope to see improvements at each. Spartan clearly listened to everyone’s suggestions and complaints last year worked hard to make improvements so I expect they will continue to do so throughout the season.