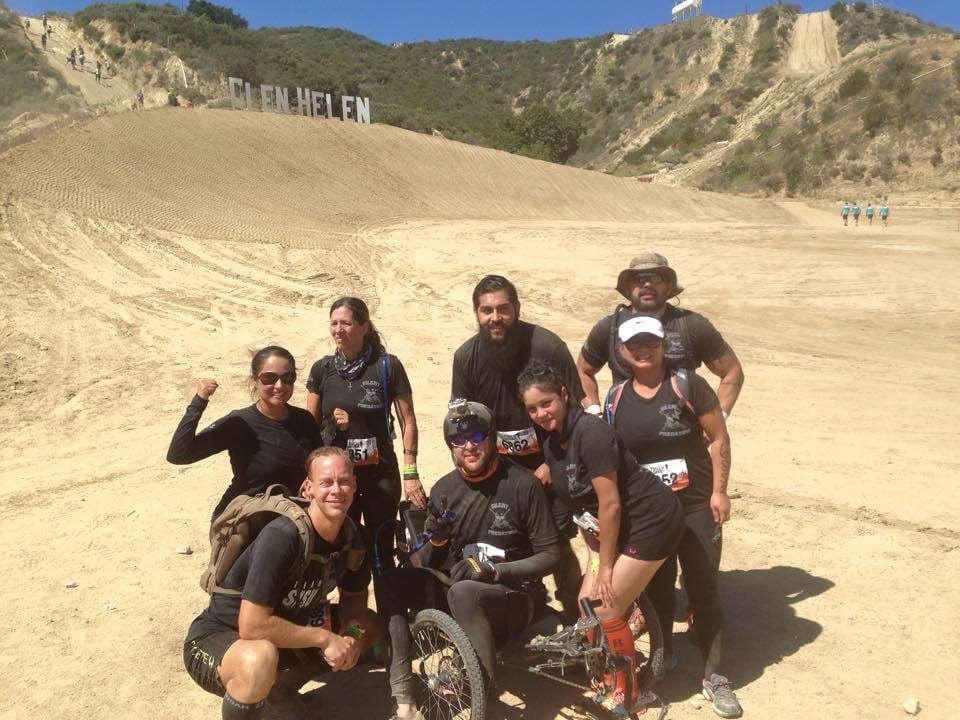 On March 28th, 2015 I had a wonderful opportunity to be part of something more. A few days before, the Weeple Army (of which I’m a proud member) was contacted by one of our own looking for assistance for Team Silent Predators at the Los Angeles Tough Mudder. Team Silent Predators was formed in 2014 around Petty Officer Ryan Sykes, a wounded war veteran who received a traumatic brain injury while serving in Afghanistan. The team was composed of Ryan’s friends along with members of the Orange County Sheriff’s department, the San Ramon Police Department, and Beach Cities Krav Maga who came together for one purpose, to help Ryan Sykes conquer the Tough Mudder. They did this successfully in 2014, and were now coming back for another round and to make him a Tough Mudder legionnaire. 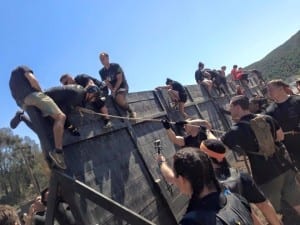 On receiving this invitation and request for assistance, several members of the Weeple Army including myself stepped up, excited for the challenge. Tough Mudder generously provided entries for us to be part of his support team.

We met up with Ryan and the rest of Team Silent Predators early outside the venue, and they passed around waivers, had nice tech shirts for those of us who wanted one, and got us through registration with no fuss. At the start corral, the voice of Tough Mudder Sean Corvelle pointed out Ryan and the team to the rest of the people lined up ready to race, and let them know that something special was happening. Then we were off on our adventure. 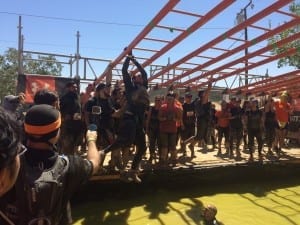 The San Bernardino venue is known for its steep, sandy hills, and the course took full advantage of these, having us climb and descend over and over again for the first six miles or so. After Ryan walked up the first Death March hill with assistance, he completed the rest of them in his custom chair, and we quickly discovered why the team was so large; at various points we attached an 80’ rope to the chair so we could lower it safely down the steepest hills, or help pull it up while others pushed from behind. Shorter or less treacherous hills we could simply link arms for a faster but equally effective method. 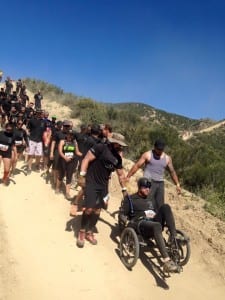 Ryan attempted all of the obstacles, making it further on Funky Monkey 2.0 than several other athletes, and being boosted and hauled over many of the walls and Everest with a rope climbing harness and lots of assistance. He made a valiant try at grabbing the bar at King of the Swingers (while several of his team waited in the water below with the on-duty lifeguards to assist him when he hit the water), and even Arctic Enema was no match for this warrior.

Throughout this process, Ryan remained very positive and provided inspiration to so many people along the course. Cheers spontaneously erupted at multiple points from spectators and participants alike. When we finally hit the flatter parts of the course along the motocross track, Ryan took off, forcing many of us into unexpected sprints late in the race to try to catch up. 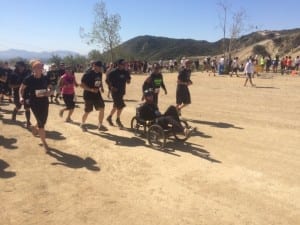 “In many ways, this group exemplified the Tough Mudder event displaying tenacity, creativity at times, and a level of teamwork that was awe inspiring.”

Team Silent Predators started together, and ~7h and 10.2 miles later we finished together. Ryan looked great in his green (2x Tough Mudder) headband, and the finisher beer tasted fantastic after we truly earned it. In many ways, this group exemplified the Tough Mudder event displaying tenacity, creativity at times, and a level of teamwork that was awe inspiring. Tough Mudder employees and volunteers were fantastic and helpful throughout, and this is one event that I definitely won’t forget anytime soon. If you’ve done multiple OCR’s and are starting to find them old hat, up your game by helping a challenged or adaptive athlete make his/her way through the course. You’ll gain a new perspective on what toughness and fortitude really means.