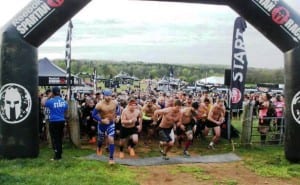 The Spartan Race this year was held in the same venue that was voted “Muddiest Spartan” last year, and though there was less mud, it was considerably warmer and the race experience was an improvement. Many new obstacles have been added to Sprint Races this year, while several others receive modifications and upgrades from race to race. Overall the bar has been raised on what to expect from a Sprint.

The farm where the race was held is a lovely country setting complete with livestock just across fences from where we ran. They also graze in the pastures where we ran which allowed for countless cow patty obstacles along the way. Parking went rather smoothly and even the furthest cars were a comfortable warm up walk to the race. The Death Waiver, Bib Number, and Registration Process is an orderly and efficient operation that many other races could use as an example.

Set on higher ground than last year’s flood plain, the Festival area was well organized and spread out nicely so even with the large number of participants it did not seem overly congested. Sponsors had tents set up, there were ATM machines available, and the merch tent and food vendors were taking credit cards. It was a fun filled way to spend part or all of your weekend.

I joked about it during the weekend, but the lay of the land had the racers running uphill at both the Start and the Finish of the Race. This was kind of cool because it keeps the “jackrabbits” from sprinting to a fast burnout right at the beginning; and going uphill at the end through the barbed wire crawl, over the slip wall, and through the fire and mud pit to the cheers of spectators is an adrenaline rush that helps you get over the Finish Line. 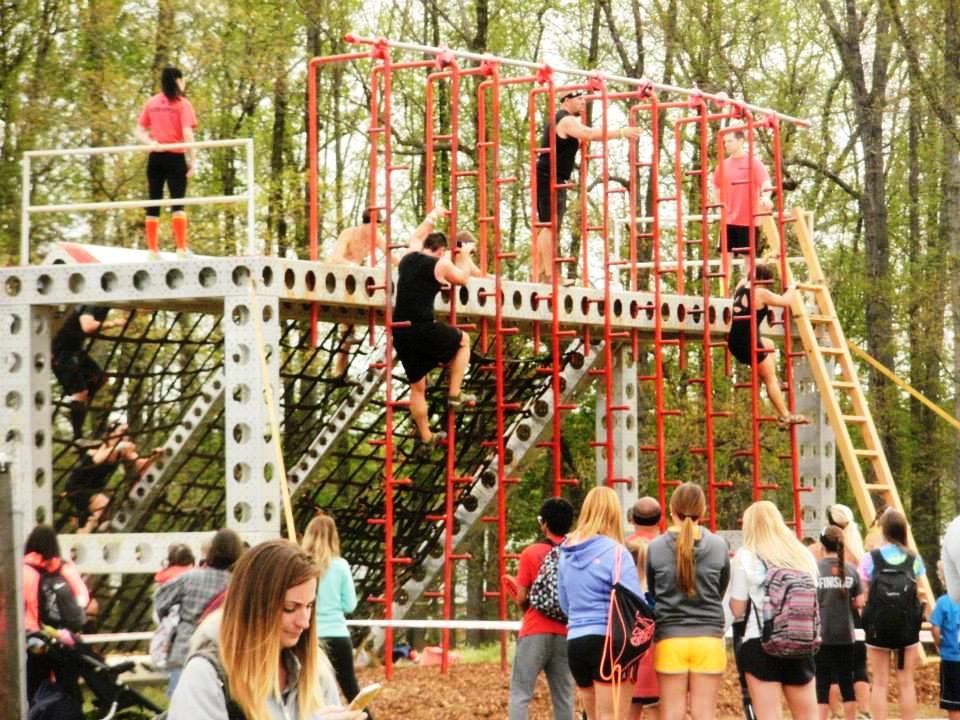 The Course Map said there were 22 obstacles in 4.3 miles. My GPS had it at 5.1 miles, so maybe I got lost or sidetracked. This was a fresh course because none of the trails seemed to be the same trails as before. I caution everyone who stresses to find out about previous race’s length and course details that just because it’s at the same venue, there’s a very real chance that it will be totally different. Spartan made sure that things stayed interesting.

Since Spartan has raised the formerly “15+” Sprint obstacles to over 20 for each race, it is refreshing to see that they added new ones (for Spartan) instead of just repeating the same type of Obstacle or using familiar Spartan ones from longer races. I was curious though about the lack of the signature Spartan Bridge at this race. I can’t remember running a Spartan without one, and the change from cargo net to wooden slats back to cargo nets has kept it fun and interesting. I missed it, frankly.

The new horizontal wooden 4×4’s were a challenge to quite a few people. Even with what was thought to be the correct technique, there were many bruises dished out on this over the weekend.

Thermopylae is a new obstacle that received an upgrade between the Atlanta and Charlotte races. An angled cargo net climb takes you to a platform where you go down poles to the ground. In Atlanta the poles were smooth like fire poles. Due to many injuries sustained, there were rungs attached to the poles for the Charlotte race which had some complaining about the relative ease of the obstacle, but no one who got hurt on this the way it was before would complain about the upgrade.

The Rope Swing is another new one where you basically make like Tarzan and swing across water hoping to neither fall into or touch the water, nor bust your butt trying to land safely on the other side. 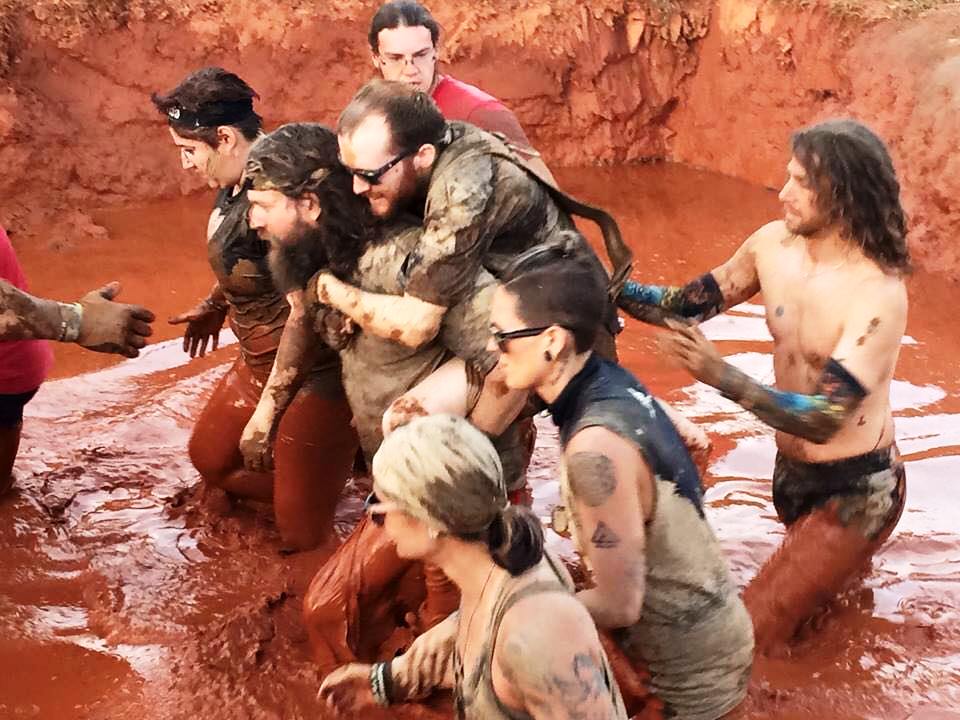 Other changes that are now becoming familiar are the “zig-zag” traverse wall, the strings attached to the spears at the spear throw, and the seemingly heavier and more difficult Hercules Hoist. While many Elite racers had to do burpees again for the Hoist, people who have recently failed this obstacle trained harder for it and were successful.

The obstacles were spaced pretty well and there was not as much distance running between them as on some other races, but since several obstacles were bunched up together I heard quite a few folks refer to this as a “runner’s course” . I kind of liked the mix of trail running through trees and creeks, and running in pasture land.

Spears, Barbed Wire, Slip Wall, Fire Jump, and a muddy water pit brought you to the Finish Line where the heavy medals were hung around your neck, and you tried to pose for pictures while attempting to open a drink, eat a nutrition bar, or peel a banana with mud gooped to your hands.

The satisfaction of completing this race was real and palpable for many people. Finishing this course was a true accomplishment. One notable Race Finisher was Justin Falls. Injured with a broken neck a few years ago, Justin is the first Quadriplegic to complete a Spartan Race. He did it in the off-road wheelchair used by Joe DeSena at the Ohio Super and put this generously donated piece of equipment to good use. With the help of More Heart Than Scars, The Dirtbags, and I AM Adaptive there was a support team that enabled this brave young man get out there and get dirty with the rest of us. In his chair, on teammate’s backs and shoulders, or on a backboard he went over, under, and through every obstacle with a smile on his face. 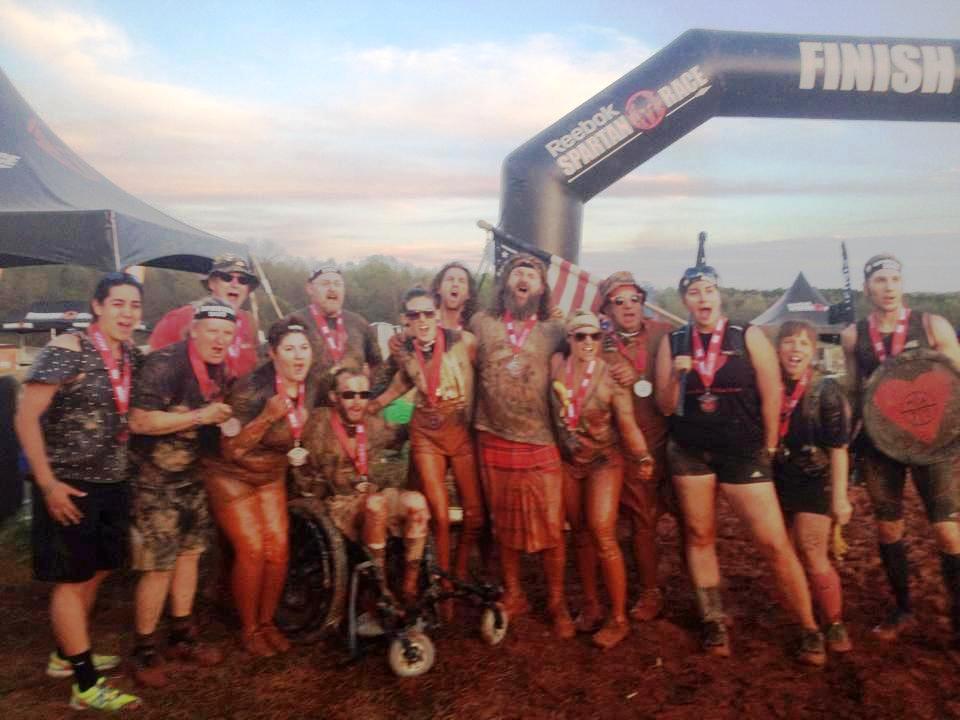 After the race we all were treated to cold water hoses and/or high pressure hosing to get the mud off. I do have to mention that I’ve seen worse wash down areas, but it still bothers me to have it located where there is thick mud all around. Once you’re clean, you have to go back through a foot of muck to get to the changing tents. Many venues put wooden pallets down around the wash down area to prevent this, so I think it would be a good idea for Spartan to copy this idea.

The post race beer from Shock Top was wonderful and refreshing, and the food vendors had a nice assortment of meals available so that hanging out with your friends afterwards was a nice way to spend the weekend.

This was a good, fun, and challenging race. It was an improvement over last year, and I’m already planning on Charlotte 2016 just to see what’s in store.

Have you done a Spartan Race? Share and Rate Your Own Experience…