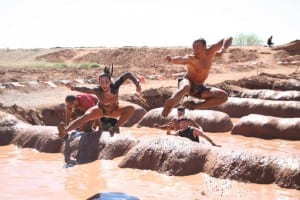 Mesa, AZ Tough Mudder is at an old raceway. It had flat surfaces for the most part with old banked tracks spread throughout. Not being from the area, I felt like a tourist. There weren’t as many signs as I thought there should be leading up to the venue/parking so I thought I was lost. The parking lot consisted of a dirt lot separated into media and general parking. Race participants had to get their wristbands and registration before you could enter the festival area, which kept most of the lines outside. The festival area had front row entertainment via the finish line obstacles and spectator/participant obstacles. Tough Mudder set up the Ring of Fire and the Human Hamster Wheel obstacles in the festival area which were entertaining additions. Mudder Legionnaires (aka multiple TMer’s) could take a free turn at the Ring of Fire, but everyone else had to pay $5, which included an instant photo. Participants could also try out the Human Hamster Wheel for their shot at a free entry. Tough Mudder had two marked spectator routes that let people walk to many of the obstacles and live vicariously through the participants. 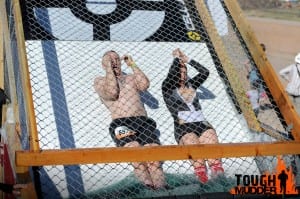 $$$$$ Probably one of the most expensive mud runs around. It feels like taking a trip to Disney where you know you are paying too much, but it’s the only way to get the experience. It’s the main reason why I haven’t repeated Tough Mudder since my first one in 2012. Race entries vary depending on when you register, but are around $155 plus with mandatory $10 insurance. This includes a headband, finisher shirt, free beer and free photography. You have to pay $20 (on-site) to park, $20 (online) or $40 (on-site) to spectate, $10 to bag check, $15 to locker check, $5 to do the Ring of Fire… My critique would be that Tough Mudder cut the runners some slack on some of the extra fees, especially the spectator fee.

A +. TM sent out emails containing race day info, t-shirt info and anything you may need or want to know before race day. They sent emails right after the race as well about what to expect and where to find photos. TM had even more follow-up emails to make sure you didn’t miss out on anything. Heck, they even listened to their participants and are planning to bring back finisher tees for everyone instead of just early registrants. 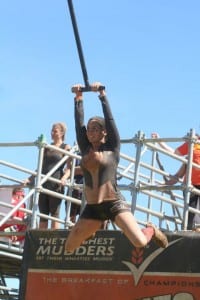 Before the start line, TM channeled the runners through a warm-up area where a sexier “Reno 9-1-1 look-a-like” leads you in a slightly suggestive warm-up (this was a great way to take the edge off before taking on this tough course). The starting DJ was a little long-winded with his speech, but once we were sent off, the adrenaline kicked in. The course was flat for the most part. It winded all around this large open area that had remnants of a racetrack with banked edges. The stretches of running in between obstacles were decorated with humorous signs, which I enjoyed (PSA to Runners: Don’t wipe your muddy hands on the signs because others behind you cannot read them L).

I LOVED some of the new obstacles. I last ran in 2012 so they changed up some of their signature obstacles and added some new ones. Here are some that stood out:

-The Arctic Enema 2.0 added a slide at the front end of the ice tank, which forced participants under the water right away. That was easier than jumping in first and then having to go under the wall. Once inside the ice tank, participants had to climb over a wall in the middle before getting out and thawing off. You got to love the Arizona weather, which made this obstacle easier to recover.

–Beached Whale was rather entertaining. It consisted of a large inflatable blob that runners had to attempt to climb over. The funny part was watching every bounce off of the “blob” after a running start. Team work was required for this one since there was nothing to hold onto to pull you up.

–Cry baby was the new rage before the season started. When I reached this obstacle, they said the fog machine was not working. I went underwater under a wall to enter the “gas chamber.” Nice touch, TM….forcing participants to take that breath when entering the chamber. Everyone was comparing the smell of the gas to Vicks Vapor rub. It bothered your eyes and nose a little, but it was survivable. J Still a fun twist.

–Warrior Carry– Grab a teammate or a stranger and take turn carrying them. I ended up carrying my partner piggy back style since he weighed about 50 lbs more than me. Others chose to carry in a fireman carry style. 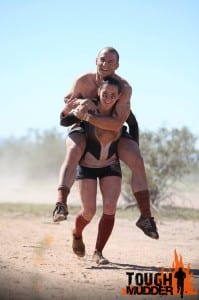 – Funky Monkey 2.0 gave a new twist to your traditional ascending monkey bars by adding a swinging bar that transitioned you to a descending parallel bar.

-My FAVORITE was the King of Swingers where one must jump from a platform, grab ahold of a swing and let go in time to ring the bell. It looks intimidating, but it was so fun taking that leap.

-I also liked the peg board obstacle aka The Liberator. I have not seen that on another course.

– Everest 2.0 looked pretty intimidating. It was a large wall/ramp that required a running head start and long reach for the top. Teamwork is very helpful on this obstacle.

–Dead Ringer – This was a special obstacle for Mud Legionnaires where participants had to traverse sideways by placing rings over an ascending-descending peg ladder. It’s all about the rhythm.

-My least favorite and always the last obstacle is the Electroshock Therapy. I was lucky this time around and did not get shocked. I considered bypassing it, but my teammate was a first time Mudder and I couldn’t leave him hanging (he got zapped 3 times)

After the race, myself and the rest of our awesome group stuck around the Shock Top tent, which was conveniently located near the electrical obstacle/finish line. This let participants and spectators get their celebratory buzz on while listening to music and watching runners get zapped. There was even a little monitor on the obstacle that displayed the amount of voltage that hit each victim…I mean, runner. We had a fun time in the festival area and even picked up some new friends. Maybe it was the beer, but I think I saw a muddy leprechaun with his pot of gold. 😉

Tough Mudder should definitely be on everyone’s bucket list. The experience is worth the price. Too afraid to try it? Remember that a lot of the obstacles are mental (ice, electric, gas) and this course is all about the challenge. People of all shapes and sizes participate in this event and it is geared towards teamwork. I had a great time at the race and would recommend it to everyone who hasn’t done it in a while OR who hasn’t done it at all. 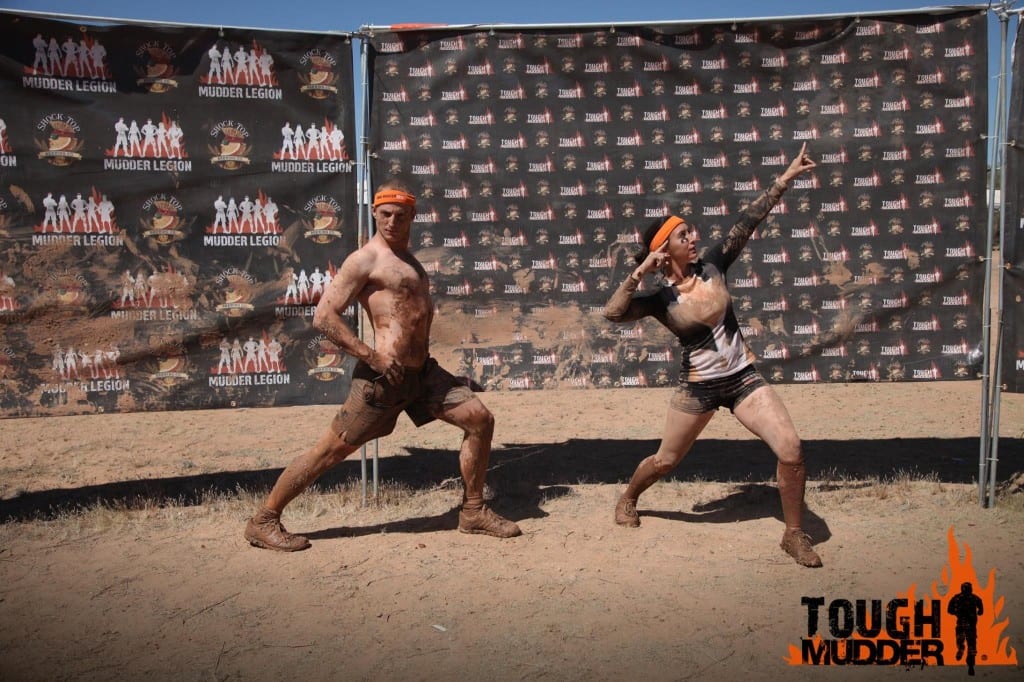 Have you done a Tough Mudder? Share and rate your own experience…