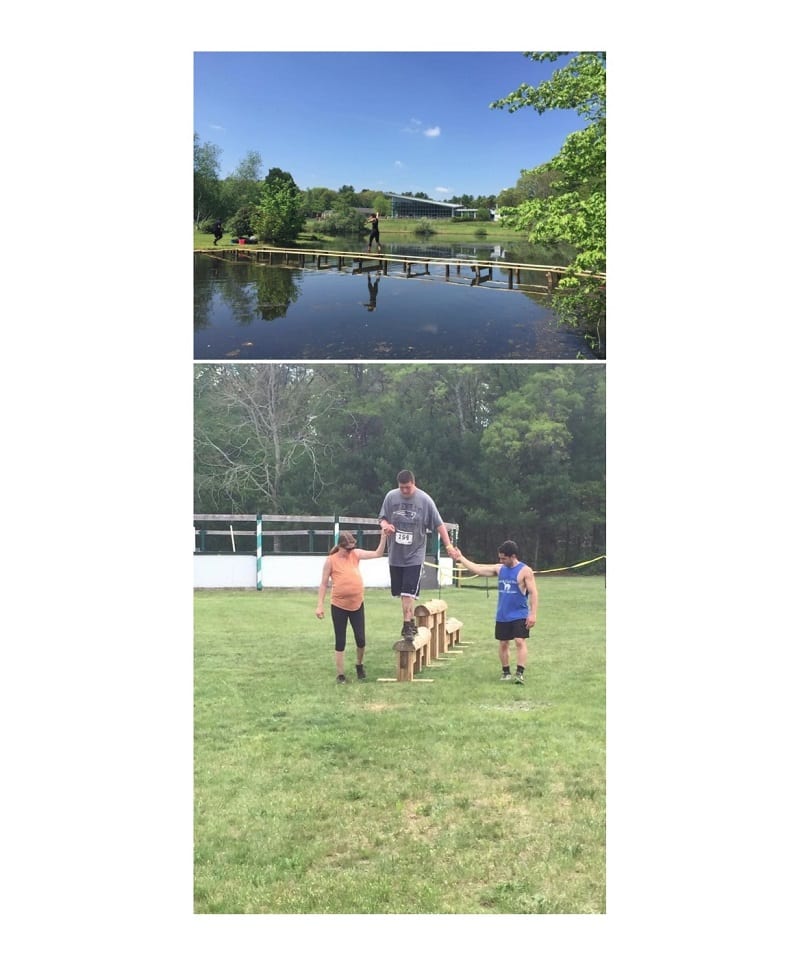 After interviewing Bridging Abilities Race Director Amy Reichenbach the race was one not to miss. The day before was Bone Frog Challenge had taken a toll on me and Sunday at Bridging Abilities would be a push. After finishing my last two laps of Bone Frog I plugged the address into my GPS and drove several hours and ended up arriving just after 1 AM and yet again slept in my Prius.

It was a beautiful day from the start and I could tell this was going to be a fun day, I was happy for the late start of wave # 1 (10:30 AM) as I got to sleep late. The course started with a very short sprint and then came to the first obstacles, which was a set of two slatted walls to hop over. Next was a fence (that is part of the actual property) which I had to step/hop over.

Up next came a 9’ tunnel crawl and the course then went into the woods (into what I can only call marsh and swamp lands) and provides tree cover from the direct sunlight. This course from start to finish had far more mud and dirt than the Bone Frog course the day before.

The course stayed in the woods for some time and was very challenging most of the way dealing with the natural marsh/swamp terrain. During the trail run there was a “log balance over bog” obstacle that was fun and challenging. The course opened up to a power lines area and I had to do a Log carry. On my first lap, the only log left to use was larger and heavy one shaped like a Y that was digging into my shoulders the entire carry! Between the heavy/awkward log and the direct sunlight pounding on me, I was happy to get this carry done! After the carry, the courses stayed in this open area and had runners run down and then back up a trail. Right after this was a Mud crawl and then followed by “Ankle biters”, which was green strings criss-crossed around/through each other and I had to maneuver/make my way through them. After some trail sprinting up next was “The Bog” which was a fun natural terrain obstacle in the deep marsh/swamp mud. Up next was a Cargo net climb which was a nice challenge.

At this point the course exited the woods to a “3 wooden horses” obstacle and then came to “Walk the plank” which was a balance crossing over a shallow pond. The walk had a little shake in it, so it made it more of a challenge to not fall in the water. Once across the plank I filled a water bucket with water and walked it around the little island I had just crossed on to. It was pretty hot at this point, so I dumped the dirty pond water on the top of my head! It was now time to exit the small island via a little floating donut by pulling a rope to get back to the other side. I personally wanted to get wet, so I skipped the float and just swam across the pond! The course went back into the woods for loop two which was about a mile of trail running in some more fun marsh/swam lands. 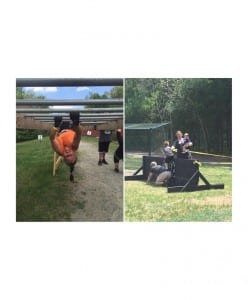 The course eventually came back out of the woods and very a short distance later came to an obstacle called “Pick your poison” which offered several options of obstacles such as a peg board climb, a hoist, a wreck bag box jump, and a monkey rings traverse. After selecting one of the challenges and completing it, the course went a short way to a rock carry. The rocks much like the logs previously varied in sizes and weights from big to small. While doing the rock carry the course made its way back to “Pick your poison” and racers had to do/pick a second challenge different than the first one.

After the second poison, racers returned the rock to where we picked them up and then we immediately entered a horse barn via a low crawl and once in the barn we had to take two car tires and place them in a wheel barrel and then steer/weave the barrel around some points in the ground and then back to where we started. After this, we exited the barn via another low crawl and then racers had to climb up and over a slatted wall, just followed by a Spider bars obstacle, which was low monkey bars that required you to climb underneath keeping both your hands and feet on the bars and off the ground. The course then came to three knee high hay bales to jump/hop over and then racers had to jump/climb up a shorter wall onto a platform.

Most of the course since arriving to the pond was in the direct sunlight and it was a pretty nice day, so you could feel the effects of the sun. A short distance later was a Log balance obstacle that offered two versions (straight and zig-zagged). A short sprint later was a tall black slatted wall climb and then a series of Through-over-through-over obstacles. We then had to weave between several trees and then came an obstacle with two tires, this obstacle required using two tires to travel about thirteen feet without your feet touching the regular ground. You needed to step into the donut hole of one tire and move the next tire in front of you, you then had to step into the next tires donut hole and repeat the process and move the other tire again until you covered the entire distance. Up next were three slatted walls (not that high) and then one of the more intimidating obstacles on the course, “Log double up” which is a version of the sternum buster but really high up off the ground. This brought us to the last obstacle of the course an 8 foot wall with a rope on one side of the wall. The course came to an end and finishers were greeted with a finisher medal, cold water, and bananas. 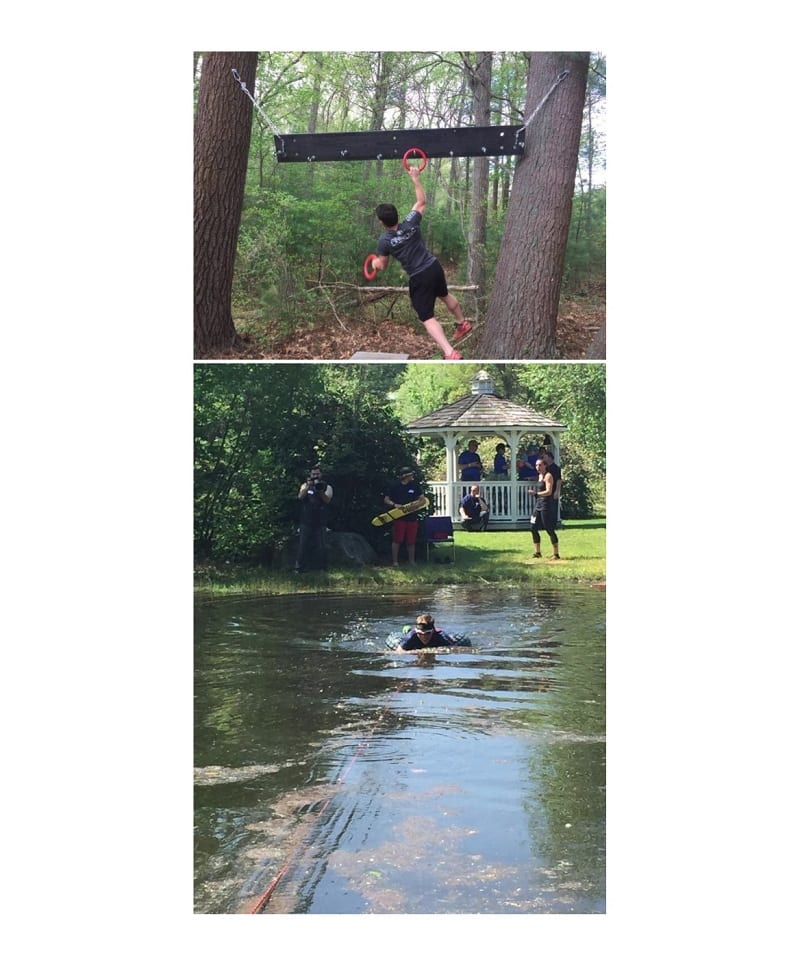 I enjoy trying obstacle course races that are not well known and especially ones that are raising money for local charities, so I was very happy I was able to make it to this event and run the course twice. The turnout was not a huge one, but everyone that did come had an amazing time. The course was nicely designed to use the natural terrain early and often, but at the same time very much safe and something just about every first timer to an OCR could complete.

The medal is a very cool looking medal and the white shirt is nice as well. I am happy to add both to my 2015 collection.

I enjoyed the event, and Amy has promised she will come leave a comment once they get the final totals for total money raised for the center. The course was great and the festival area included a food truck, free child care, a guest speaker, vendors, disability-related organizations, cool giant inflatable carnival games for kids! Racers were also allowed to run unlimited free additional laps. I cannot end this article without giving a shout out to the New England Spahtens that showed up about 45+ members/racers strong and also stepped up to volunteer for the event. I hope word of mouth (and this article) helps the next Bridging Abilities Obstacle Challenge have an even bigger and better turnout.

The event was fun from start to finish; the obstacles were all well-built and challenging, and Amy and the entire staff and volunteers put on a great event. I am going to rate the event a 4.7 out of 5 stars!