Happy Memorial Day Weekend and a special thank you to all the men and women who serve. With the holiday weekend the obstacle racing world was a bit quieter with three major races taking place in the US – Badass Dash Las Vegas, Mud Guts and Glory in Ohio, and a Spartan Stadium Race in Miller Park. Be sure to check out OCR World Championships World Rankings to find out who tops the list this week. 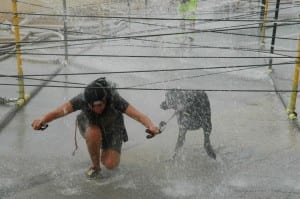 Badass Dash returned to Las Vegas again this year to South Point Casino and Arena. Badass Dash is now an OCR World Championship Qualifier race for 2015. It is the only obstacle race to be run in a casino and the only race to have a K-9 division in which participants race through obstacles with their dogs.  Julie Johnston owner of Camp Rhino in Las Vegas had this to say about the event,

“The Elite Badass Dash had the TOUGHEST and the MOST obstacles of any Race in Vegas since the old 100 Obstacle Rhino Course back in the day! The organizers are top notch and are passionate about building new obstacles, such as the inverted trailer hitch sideways climb. Our rhinos who raced elite and took the podium earned it in a big way!”

Second place female finisher, Shaun Provost had this to say about the event;

“Any athlete looking to mix up their race routine should definitely hit a badass dash event. In addition to the normal walls and crawls obstacles, they used the venue itself to create some unique and difficult obstacles that are spread over the entire course.” 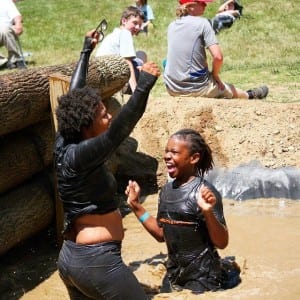 Mud Guts and Glory, home of the 2015 OCR World Championships, in Ohio had some of the best flock to their permanent course to get a sneak peak at the terrain and obstacles that this challenging course had to offer. Junyong Pak continued his winning streak after his win at BoneFrog Challenge last week topping the podium once again at Mud Guts and Glory. The battle for 2nd and 3rd on the men's side was tight with only a second separating Chris Schapman and Joel Fox. On the women's side Rose Wetzel dominated the women's side with a commanding win, followed by Erin Brooks and Adriane Alvard.

Schapman had this to say about the race, “Another amazing event by the staff at King’s Domain. The race attracted four-time winner Junyong Pak, and Joel Fox and I relentlessly gave chase from the start. Ultimately, Pak won, and I had a slight edge on Joel. Joel is a competitor… watch for him to secure more podium spots. Taylor Clark, another Cincinnati favorite, and Robert Wiltshire finished out the top 5 giving our team, Relentless OCR, four of the top five spots. Proud to be part of the “fastest team” for a second week in a row.” 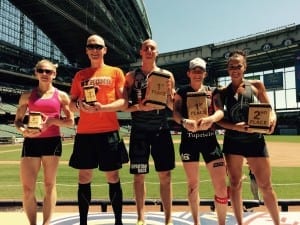 Spartan Race headed to Miller Stadium home of the Milwaukee Brewers. It was a tight race on the women's side for first and second with Orla Walsh and Karlee Whipple battling it out for first place. Walsh said, “Stadium races are always a blast and a burner to the legs! Karlee Whipple and I battled back and forth for a good part of the race! What an amazing athlete she is!”  On the men's side Brakken Kraker added another win to his season besting a competitive field of men.