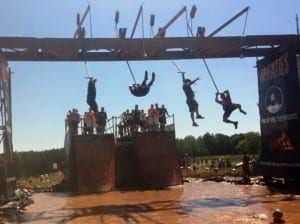 Tough Mudder is celebrating their 5th Birthday right now and they threw a Birthday Party that couldn’t be beat in Atlanta last weekend. Mudder Legionaires sporting multi-colored 10x and up headbands have crowed that this was the best TM they have ever done. There were so many people absolutely ecstatic after this race you would have thought that there was free beer and beef jerky at the end. Oh yeah, there was.

How Tough Mudder Made This Event Better

There were many races that met with mixed to low reviews in 2014 and TM apparently not only listened, they actually did something about it. Adding a “2.0” designation to some of their signature obstacles wasn’t just a “new and improved” marketing scheme where they slapped a coat of paint on something or ran it backwards, they fundamentally changed the structure, difficulty, and fun factor of a lot of their challenges. Have you crushed Everest, Funky Monkey, and the Arctic Enema so many times that its hum-drum now? The 2.0 versions are better, sometimes harder, and more fun.

There are many obstacles that have been added to the 2015 schedule that aren’t just new to Tough Mudder, they are new to the OCR World in many cases. Creativity is not dead at TM HQ. 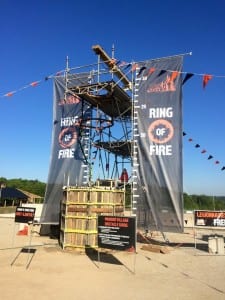 People complained last year about some of the venues not using the terrain to its full advantage and being too flat and easy. Now Tough Mudder is always going to be a “Runners Race” simply because of the distance. They’re not interested in staging 5k or 10k OCRs. They’ve been in business staging 10+ mile races and have been wildly successful doing so, so don’t expect that to change any time soon. This year the designers took that feedback and looked to make the running more rugged. This was the same venue as last year’s race, but everything was in a different part of the farm so the Mudder Village was new and fresh, while the trails went through some pretty challenging up and down-hill grades.

A lot of wailing and gnashing of teeth went on when TM announced last year that they would be doing away with Finishers Shirts for 2015. So they listened and went back to good Dri-fit shirts to go with their signature headbands. Then they added a cool Sport Towel to the swag given out, just to make folks even happier.

There is something magical about being outside with your friends in the Springtime and playing like kids. This weekend boasted the first warm, sunny weather that Georgia has seen in many months. Clear and dry conditions made the long walk from your car slightly more bearable. Parking was on-site, but when the site is massively huge, people who got there late ended up being quite far from registration, and it was uphill. (Note: ALWAYS remember to check for your ID before leaving your car. It’s no fun to trudge uphill all excited about racing only to find that you get to go back downhill to your car for a Driver’s license and then trudge back up again. Warm ups should be fun, not a chore)

The horse farm where we raced was a truly gorgeous spread of lush pastures, lakes, ponds, remarkable barns, and training areas. Picture running at the Biltmore Estate – this was almost as magnificent. The Registration process was well organized and went fast (as long as you had your ID the first time). And soon you were in the Festival Area where the fun really started. 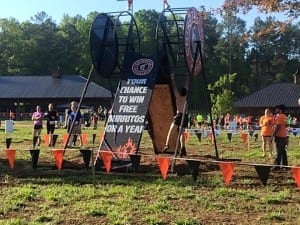 The excitement in the air was palpable as folks took in all the tents and activities to enjoy in the Mudder Village. Tough Mudder is very successful in landing sponsors and vendors and it shows in the amount of giveaways, samples, swag, and activities that you can enjoy when you’re not on the course. There are Spectator Fees charged for people who don’t want to race, and at Tough Mudder they actually can get their money’s worth. There’s a Human Hamster Wheel that’s a huge spinning monkey bar. The person who does the most can win free burritos for a year. Ring of Fire is a really cool fireman’s pole that goes through fire before dropping you in a dunk tank. Photos of you doing this are for sale, but are free to Legionaires. Other activities and great music keep it exciting. There’s a great kids race too so the children can have fun being kids while their parents act like kids.

As you approached the Start Line there were vendors offering free energy drinks and nutrition bars even before you hit the Warm Up Zone. Once warmed up and corralled it was time to move through the chutes to jump a wall and get ready to start. 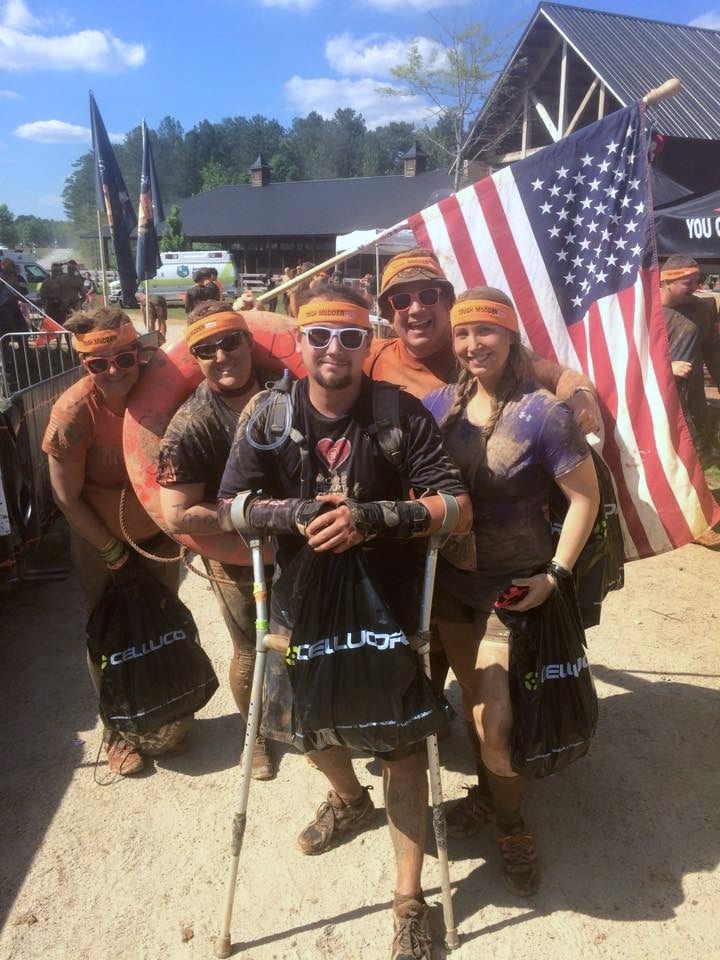 This is not a Race. This is a muddy, fun, challenging Event. There are no timing chips. There are no podium spots or big checks to compete for. No one is in competition with anyone else. Tough Mudders are out there for the benefit of their fellow mudders as much as for themselves. My GPS had it at 10.5 miles, but others have logged 11+ miles and that comes as no surprise. Some of the obstacles were so much fun that people ran back to do them a second or third time, and if you saw friends nearby running a different section of the course you just ran over to them and socialized for a bit before getting back on your way.

Crossing the Finish Line was a real pleasure. This was a long and difficult course, but the fun and laughter that you had from start to finish was remarkable. They stretched Orange Headbands over our heads, and then sponsors gave you a plastic bag so you could start piling goodies in there. I’ve never ended a race where I've gotten so much free stuff just for running. Yeah, I know, nothing is “free” and for the prices you pay you should get a swag bag full of stuff to go with the delicious Shock Top free beer. But I have to say that in retrospect, there is such an incredible value to the money spent to run this Tough Mudder that every penny was well spent.

I would highly recommend Tough Mudder to everyone who likes to run OCRs. “Elites” who stress over competing for money or podium spots can relax and enjoy the Event for the enjoyment of just being out there and getting dirty. Maybe even get to show off a bit and help other people along the way. Ordinary “Open” racers are in their true element and challenging themselves in new and inventive ways. Couch to 5k people can get out there and complete a Tough Mudder at their own pace while receiving assistance from everyone out on the course and could possibly have one of the best days of their life.

Have you done a Tough Mudder? Share and Rate Your Own Experience…