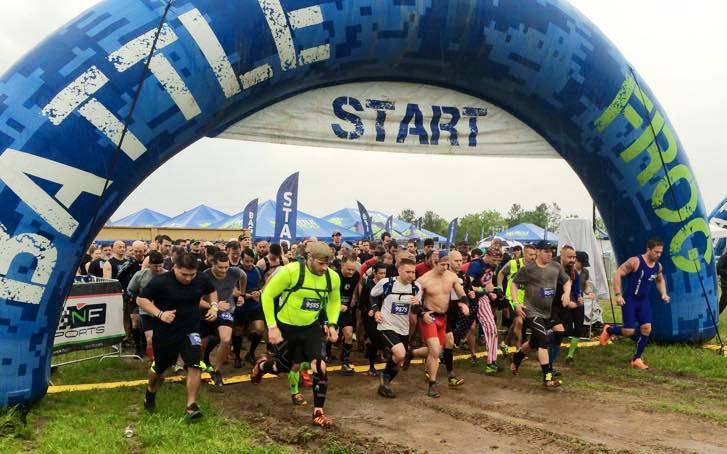 BattleFrog Carolinas just took the top spot on my Race Resume as the toughest overall Obstacle Course Race I have ever done.   I got my butt kicked. Repeatedly. “Misery loves company” may be a popular cliché, but I gained no solace from the fact that many “Elite” racers who seemingly NEVER fail an obstacle were forced to hand in their bracelets after hours of trying to comply with the “Complete all obstacles rule”. If you finished this race with your bracelet intact, you truly accomplished something great. BattleFrog Extreme (BFX) multi lap competitors and Open racers were given the opportunity to perform penalty 8 Count Body Builders in order to continue, but everyone who earned a medal on Saturday knows that this was one for the ages.

There was a slightly longer race on a ski slope in Virginia last year that I struggled with a little more, but that was probably due to terrain and being post-op. And a great race series that advertises that it has “Obstacles built to kick your ass” has handed me my butt before, but never have I left a venue with such a feeling of “I didn’t measure up to where I want to be, so now I know what I need to work on.”

The rainfall in the area has been remarkable over the past few weeks, and it rained heavily the night before the race and continued with varying intensity all through the day. The course promised to be among the muddiest and most slippery course ever, and I think it delivered. Every footfall held the enhanced pucker factor of not knowing if your foot was going to involuntarily slip a foot to the left, right, forwards, or backwards. Twisted knees and ankles were quite prevalent on Saturday, and many people hobbled across the finish line looking like zombies from “The Living Dead”.

I have to take a moment to plead with the OCR community to help those who are new to our sport and provide positive advice on what to wear for a race. I know we may get tired of the “What Shoe/Shorts/Shirt should I wear?” questions, but we were all new at one time. I saw so many underinformed Newbies wearing street running shoes and 20 pounds of soaked cotton shirts and shorts, it literally broke my heart. We all want to see more people getting out there and racing OCRs, and I can’t help but wonder if the guy slipping and busting his butt every 20 yards will ever think of returning just because no one told him that Chuck Taylor Converse All Stars were a rotten idea. 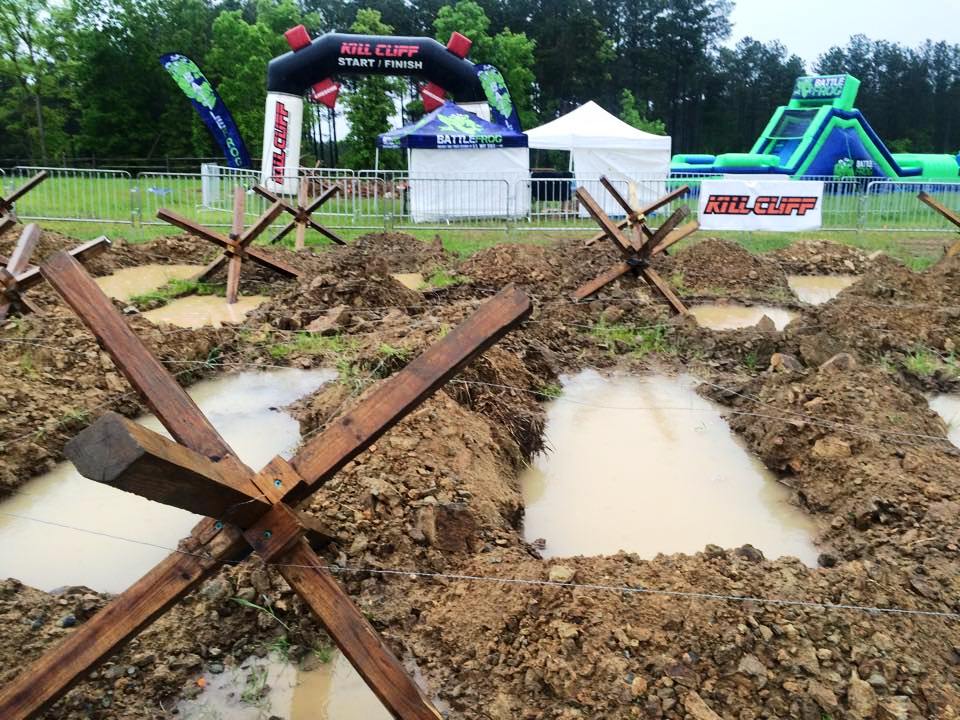 Carolina Adventure World is an established ATV and Dirt Bike course, so the parking was very close to the festival area and offered a safe place to park and walk in without worrying that your car with low clearance you bottom out in holes or get stuck in the mud or you’d have to dodge cow patties on the way in.

This course has been home to last year’s 15k BattleFrog, Spartan Beasts, and SuperHero Scrambles, so I was interested to see what changes would be made to the course in order to accommodate a shorter distance. BattleFrog did a great job in utilizing the natural terrain obstacles offered at the venue and presenting a great race.

Registration was very fast, and due to the electronic Death Waivers that were filled in during the online process, you got your packet and were on your way to getting ready to race in record time.

The Festival Area was a nice mixture of the usual merchandise and vendor tents, with a very large tent for the Biggest Team complete with tables and chairs, and another big one also with tables and chairs next to the food vendors where people could congregate and socialize. The tents were a true blessing because the cold rain kept everyone huddled together and discouraged just wandering around very much.

Advertised as an 8k race with BattleFrog’s recent combining of their previous 15k and 5k options into one race course that everyone shares, this actually mapped out to just under 10k with GPS results of 5.8 miles that included the distances covered with the Jerry Can and Wreck Bag Carries. More on those lovely “strolls through the woods” later

Elite Racers competing for money ran the course twice and had to complete all obstacles unassisted in order to keep their Elite bracelets and be in the running for money and points. The failure rate for this was rather remarkable. People were seen stubbornly attempting the same difficult obstacle over and over again, sometimes for hours, just to eventually complete the challenge or turn in their bracelet.

BattleFrog Extreme racers signed up to run the course as many times as physically possible during the course of the day. If they failed an obstacle they could do their penalties and continue on. The BFX medal is both large and impressive, especially with the gold stars added to denote how many laps were completed.

The Open racers ran this extremely tough course and were able to assist one another on the obstacles as well as do their penalties if they failed or chose to bypass an obstacle they didn’t feel comfortable attempting. 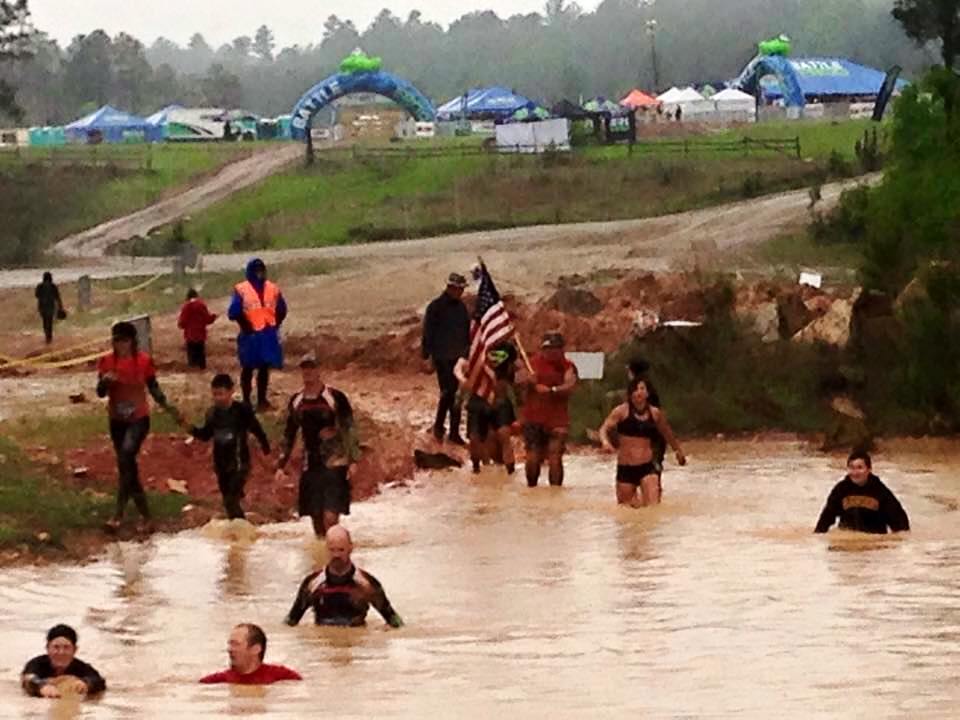 Because BattleFrog is still relatively new to the OCR world, and every race has new obstacles with different twists, I’m going to go directly from their Course Map and talk about each in turn. If you’ve never done a BattleFrog, you should read this, look at pictures and videos, and seriously consider training for and completing these obstacles. If you’ve done a BF before or were there on Saturday, this should bring back memories. Fond ones, maybe frightening, or both at the same time.

X-   Tunnel Rat (Lap Transition) For those doing multiple laps, they made you crawl through cold stinky water under plywood in a tunnel maze through the mud and sharp rocks just so you could start with the above obstacles all over again.

The BattleFrog medal that got hung around your neck was beautiful and worthy of pride, the BFX medal is big and awesome, and being able to still walk after the race was a blessing. The hamburger from the food vendor was one of the tastiest I’ve ever had, but all I wanted to do was get clean and dry. The finisher’s shirt is rather attractive, and I know I had a Free Beer ticket, but there was no way I was putting alcohol into my food and water deprived body before driving home.

It was the toughest course I’ve run because it exposed every single deficiency in my training and abilities, letting me know what I have to concentrate on in order to have the most fun doing these OCRs. 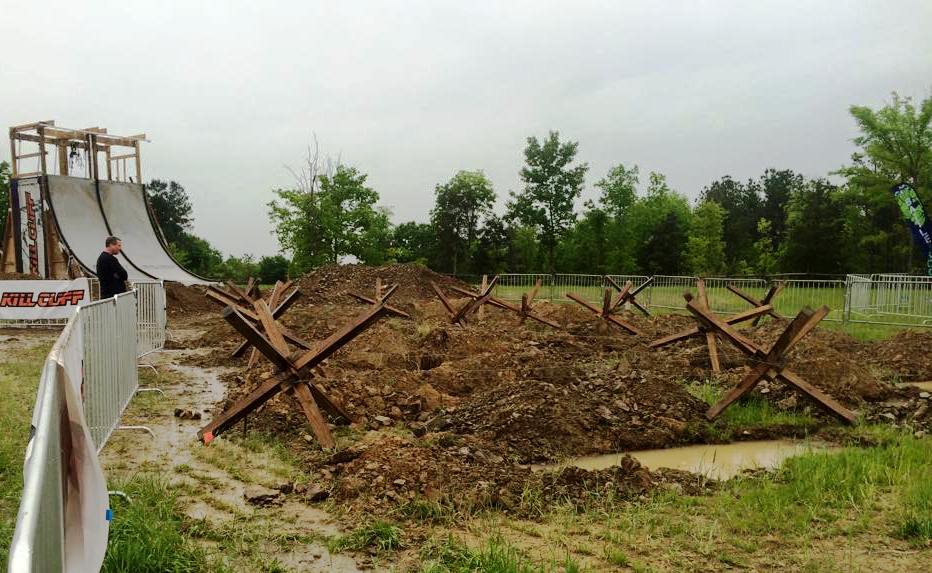 To the Elites who completed the race still wearing your bracelet – I salute you.

To the Elites who lost their bracelets – Your efforts were remarkable and awe-inspiring. This was not a defeat, merely a step on your path to greatness. When the course designer is walking around carrying handfuls of lost bracelets as “spoils of war” and looking like he’s building a trophy necklace of severed ears, giving up your bracelet was a painful task that many of your peers endured.

To the BFX Racers – You faced a course, obstacles, and conditions today that were above comparison, and you didn’t blink. Well Done.

To the Open racers who finished – This was an accomplishment to be proud of.

And to the many people who DNF’d – Not completing this course is nothing to be ashamed of. Merely stepping off at the Start Line showed you were willing to pit yourself against the worst that Mother Nature and BattleFrog could throw at you. Regroup, Refocus, and make sure you get out there and go for it all again.

Have you done a BattleFrog? Share and Rate Your experience…