After patiently waiting years for Spartan Race to bring their Super event to New England, we were finally rewarded. We were close last year with a pre-registration for the event but it never materialized. However, many New Englanders were thrilled when one showed up on this year’s schedule. Along with the Vermont Beast and the Fenway Park/Boston Sprints scheduled for later in the year, it was our first opportunity to add that elusive blue pizza slice to our multi-colored all New England Trifecta medals. Adding to the excitement was that the event would be held at a different venue that hasn’t been used before. When the Amesbury Sports Park, the previous mecca for obstacle course races in New England, abruptly shut down last year and would no longer host OCR’s, many were nervous about the future of the sport in the area. For years, the Sports Park was the first and only venue to host the Spartan Sprint races. Thankfully, Spartan Race struck a deal with a local dairy farm in a rural central Massachusetts town to be the new host for this year’s Super and Sprint versions of the wildly popular race series. With no real knowledge of the venue, we were left to speculate on how Spartan Race would utilize the space. 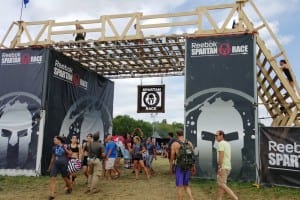 With such a high volume of people expected at the two day event, participants were charged $10 to park at a nearby field and hop on a shuttle for a 20 minute ride to the venue. While a common practice with most of the larger events, Spartan Race really has the logistics nailed. There was an army of buses constantly running throughout the day and there was never a wait either arriving or leaving the event. Registration was also a breeze with plenty of waivers available.

The starting corral was oddly positioned outside of the main festival area and away from the action. The MC was decent but offered nothing too inspirational. After a few obligatory “Aroos”, we were released with no real fanfare. The course was fast with little to no elevation change. There were a few technical trails to contend with but nothing too difficult. Footing was challenging with the tall grass getting matted down and covering the numerous rocks, holes and stumps littering the course. In addition, we were also warned of the high number of ticks that we would have to contend with. Most of the standard Spartan obstacles were there with a few tweaks – O-U-T walls, inverted walls, Z-walls, spear throw, fire jump, herc hoist, sandbag carry, bucket brigade. I was a little disappointed to not see the log hop, monkey net or rope swing though. 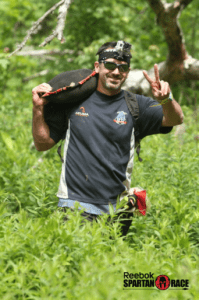 The knots returned to the rope climb but the chest high water made it very difficult to get started. The multi-height monkey bars from last year reverted back to the regular ones. The tire drag was replaced with a metal plate holding sandbags. The tryolean traverse just isn’t as intimidating when it’s only 5 feet from the ground and not across water. The new “Stairway to Sparta” involved a steep angled wall leading to a ladder climb. The hardest obstacle of the day was the multi-bars which involved a couple of pole-style monkey bars with a transition to tarzan swings in between. This was also where my attempt at a burpee free Spartan Race ended. Maybe next time! The long barbed wire crawl was set across a gradually inclining grassy hill which helped to preserve the knees and elbows. However, the low hanging wires left there marks on more than a few runners. The familiar lattice bridge that spanned the entrance to the festival area continued to torment all the acrophobiacs. The “dunk” wall curiously hovered about a foot above the water, allowing you to duck under without submerging your head. The cargo nets that Spartan uses with the straps, instead or the rope, work really well and I wish other races would incorporate them. I also appreciate the mind game that they played with the memory board located halfway through the course. After chanting my code repeatedly in fear of getting hit with a burpee penalty, it took me a while after the race to realize we were never even challenged on it. Well played Spartan Race! (for the record: Yankee 816-8964) As with all Spartan Races, it was run very well with little to no bottlenecks anywhere. Volunteers were plentiful and always enthusiastic. 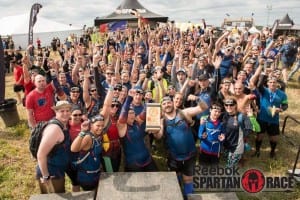 The 1000-acre Carter and Stevens Farm was spacious enough to never feel too crowded, either in the festival area or on the course. The festival area was typical for Spartan Races – vendor tents, large merchandise tents, various contests with plenty of photo opportunities. Spartan Race stepped up big time this year when it came to acknowledging the largest teams at each race. Being a proud member of the New England Spahtens, we were formally congratulated and presented with a team award. We were also offered special perks including a team tent, a nice Spartan Race patch and free spectator pass for each member, along with complimentary VIP bag check. Well done! 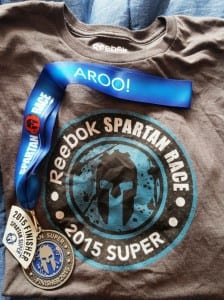 With all the controversy with the medals last year, Spartan Race made the right decision by handing out both the full medal and the trifecta pizza slice to each runner. In my opinion, they remain the best looking medals in the business. To the delight of everyone, they now offer multi-colored distance specific shirts at all their races. Another improvement was made in the free digital photo process. Last year’s frustration with sometimes having to wait weeks for them to be made available and dealing with the random timing gaps has seemingly been replaced with a more streamlined process. Photos have already started popping up only a couple days after the event……but I still hate the auto-cameras!

As with most Spartan races, this event was well executed and had everything you would want in an obstacle course race but it just seemed lacking. Many of the classic Spartan obstacles were there with minor tweaks to a few but, besides “Stairway to Sparta”, there wasn’t really anything new or innovative. They just seemed bland and uninspired. Maybe I’m expecting too much? Maybe I’ve run too many of them and have become jaded? Maybe it’s time for the “It’s not you, it’s me” speech and break up with Spartan Race for a while to appreciate it more? Maybe it was the new venue? The Super is billed as “an 8+ mile race that is often hosted on a tougher terrain.” Umm, not this one. The relatively flat course offered nothing overly challenging. Many GPS watches had the race hovering around the 7 mile mark. I would’ve assumed they’d extend it to 9-10 miles to account for the lack of elevation change. Whatever. After such a long wait, maybe I should just shut up and be thankful that we finally have a Super option in New England.

What did you think of Spartan Race? Share and Rate Your Experience…