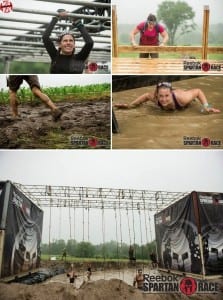 This was my first Spartan Super of the year and would complete my first Trifecta for 2015 of the year, I was very excited. I arrived to the Spartan off-site parking for the Boston Super at about 1 am after driving home for BattleFrog and cleaning myself and clothing up and then driving from NY to the Massachusetts and it was raining cats and dogs and continued to pour almost all night. I ended up getting about four hours sleep and then made my way to the event venue. I felt pretty good and decided I wanted to run two laps of the Super course, which Spartan approved. The rain continued throughout the day and it didn’t stop and clear up until sometime after about 2 pm.

Spartan used pre-race motivator Bishop Garland and he killed it and did a great job on Sunday. Bishop was awesome and really did a great job both motivating and pumping up the racers. I continue to hope to see more of Bishop as I have a lot more Spartan races scheduled in 2015.

The festival area was awesome all day on Sunday, racers, staff, and volunteers did not let the bad weather for most of the early day and afternoon ruin a good time. The mood was a fun and joyful one and it was only improved by the DJ playing a great play-list of music and also keeping everyone engaged throughout the day.

The course started out with a brief Sprint and right away it was clear that the hours of pouring rain had taken its toll on the course and it was a muddy and slippery mess. The course started with a few easy obstacle and pretty long amounts of trail running. The “Clif Monkey Bars” were a little more challenging than normal due to the rain. The course had another trail run that went for a short distance then the “Barbed Wire Crawl”, which was very long and a very low to the ground and pretty much required everyone that was wearing a hydration backpack to take it off during the crawl. 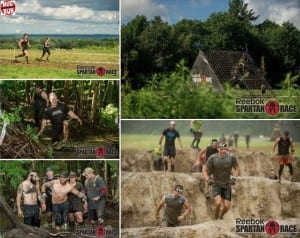 The course continued on for a ways though some other obstacles. With the massive amount of rain that had fallen all night, during the early hours of the morning and afternoon, the plate drag obstacle was much heavier than normal and the plate was getting stuck in the deep and heavy mud. I saw most racers attempt this one and either require assistance from another racer or they just skipped it and did the penalty. The Spartan traverse “Z-Walls” showed up next, on lap # 1 the walls were not so bad, but by the time I made it to the walls for lap # 2 they were covered with massive amounts of mud. “Stairway to Sparta”, which I have quickly grown to like and look forward to at each Spartan race. The obstacle is another ladder wall type obstacle, but with this one the first part of the obstacle is solid and has nowhere to grab on to and climb up, so it requires good upper body strength to get up the first part of the obstacles climb.

The course went on another one of its long trail runs and with all the massive amounts of mud, this was yet another trail run that wasn’t as easy as racers would typically have to deal with on a Spartan course and it took a lot of energy to get through these sections of the course. Eventually we made our way to the “Spear Throw”. Some of the spears literally were curved (I assume from the rain) and the rope that is tied to them was weighted down from the rain/water which made the spear require a harder throw to hit and stick in its target. This was a lesson learned for next time I have to attempt a spear that’s been sitting out in the pouring rain for 12+ hours.  At this point, was a rope climb up a slanted wall and then a few more mounds and moats of mud that lead to the Spartan Dunk Wall. This dunk wall (even with massive amounts of rain) didn’t have as deep water as they typically do and racers were able to get under the wall without having to put their entire heads underneath the water. The course had another short distance trail run and then came to the “Rope Climb” obstacle, which I was impressed to notice most racers successfully completed on both laps I did. 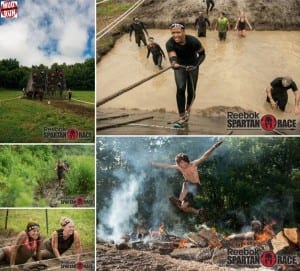 The course was now completely out of the woods and in the direct sunlight (at least for lap # 2 later in the afternoon) and went for a brief trail sprint and came to the next obstacle, which was the Spartan rope traverse, I was happy I was able to complete this traverse on both laps! The course then went for another brief trail sprint and came to the new for 2015 obstacle “Clif Multi-Bars”, which is normally a hard obstacle, but with all the rain on Sunday was even harder than normal. The course had another sprint and eventually made its way to a stream bed and then back into the woods and eventually came back out in the festival area and to the “Herc Hoist”, which due to the massive amount of rain over the night and early day caused the sandbags to weigh a lot more than they typically do and according to the volunteer at this obstacle only a handful of racers completed this obstacle on their own the entire day. The course went a short sprint more and came to the “A-Frame Cargo” climb and then back in the woods for a brief sprint and through a stream bed and came out of the woods and literally only about 100 feet away was the “Fire Jump” and then the finish line!

I was in NJ on Saturday running the BattleFrog Xtreme, so I wasn’t able to run the Boston Super under more normal and typical weather conditions and based on all the reports I read via social media and heard from friends, they considered the course to be on the easier and boring side. All I can say is, the course was covered in massive and deep mud for just about the entire just under eight miles course on Sunday and that made the course a much harder challenge and just about everyone I talked to on Sunday agreed turned the course into a course being very worthy to earn their Super and for some their Trifecta’s. I can also personally attest that the course became even harder as the day went on and racers ripped the course up and covered the obstacles in massive mud.

The newly designed medal for 2015 is a sexy one and I am happy to add it to my medal collection. It’s also a nice touch Spartan went away from one generic finisher shirt and now have a unique shirt for each course/distance.

Based on a top flight festival area with awesome music and good times, a challenging course that was only made harder/better/more challenging due to the massive rainfall, a great MC in Bishop, registration being smooth (at least when I registered), and a very polite and energetic staff and team of volunteers I am rating this event a 4.9 out of 5 stars. I have taken off the .1 point because several obstacles like the “Herc Hoist” and “Plate Drag” were almost impossible to complete alone (for most racers) due to the weather and yet racers were still told they had to do the penalty if they didn't complete them.

It's almost like Joe and his staff read the reviews on Saturday and went out sometime later in the day and did a rain dance that delivered the storm and turned what was considered a marginal course into a much harder and more challenging course for Sunday. I am happy I raced on Sunday and got to enjoy the course with much more difficult conditions and look forward to next years event/course at the same venue. It also will be very interesting to see how BattleFrog uses the same venue and land for its course on July 25th 2015.

Have you done a Spartan Race? Share and Rate Your Experience…