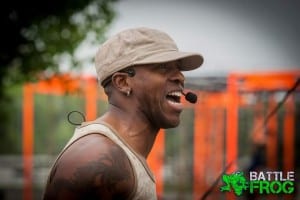 BattleFrog has changed it up some and now the pre-race speech starts with either one of the two race directors or a third BattleFrog employee who broke down the race rules and any additional important information specific to this course/venue. Something lacked regardless of which one of the three delivered this speech/information and it just didn’t have any passion and couldn’t wait for them to get done.

After pre-race instructions finished, they awkwardly passed the mic over to Coachpain Dewayne. Coachpain Dewayne is by far one of the best inspirational motivators in the OCR business. I have heard him at seven OCR events and he never gets old or boring and has clearly added to his speech when it comes to the Xtreme version of the race. I would like more of Coachpain and less of the other three at any future BattleFrog races!

One of the major highlights of last year’s Tri-State BattleFrog and the Pennsylvania BattleFrog, was the festival area and how much better it was than just about every other OCR event in America. It was not just a festival, but a party and an experience for all ages. The combination of the Navy SEAL demonstrations, Coachpain Dewayne’s presence; Navy SEAL’s like Michael Donnelly, and Don Mann helping out on course, a superior DJ, and above all staff that cared and had passion; all of this lead to the best festival experience.

Unfortunately, none of the above was present in NJ. The Navy SEAL demonstrations have been gone for a while, Coachpain no longer does individual competitions with athletes, Michael Donnelly and Don Mann were not at the event, the new DJ was bland, overall staff just no longer had the passion and drive that existed last year or even at the two Florida BattleFrog events earlier this year. The festival and experience at this race was pretty much nonexistent. This was not only observed by me but also by other participants. 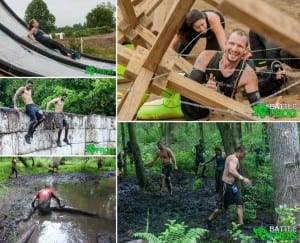 The course started with a very short sprint and came to the first obstacle, the under crawl, which right from the start confused me as this obstacle has typically been part of the BattleFrog obstacle “Over/Under/Through”, but this time it was only the “under” and set up as its own individual and unique obstacle seemed done to fluff the numbers of obstacles.  Just after the under was a “Wreck Bag” carry on the venues motocross dirt track, not nearly as tough as the Jerry Can carry in the same location last year.

Up next was “Normandy Jacks” which is BattleFrog’s version of a low crawl under (non-barbed) wires and large wooden obstructions.  “The Dirty Name” stands out  and an obstacle I really enjoy, but BattleFrog had nothing underneath this obstacle such as mats or even hay to soften the fall if any racers either missed the second log or literally flipped over it and came crashing to the ground. I personally witnessed several racers almost have bad falls from this obstacle. Hopefully in future races this will be fixed.

Almost immediately next was the “Platinum Rig”, with a very challenging but doable configuration. On lap # 1 BFX racers arrived to this obstacle at the same time as a lot of the Elites did (coming around for the second loop/lap) so myself and other BFX racers literally stopped midway through completing the Rig to clear a path for the Elites running for money and ranking. A better system is clearly needed.  A new and updated “Tsunami” came up a bit later, and has been altered to make a much less challenging version of the signature obstacle. They removed the warped wall portion of the obstacle and replaced it with a much easier cargo net climb. The water slide side no longer ended with a fun splash into a pool of water, but instead ended with a blue tarp just sprayed with some water. 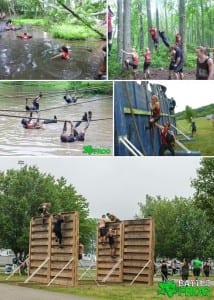 The course continued though some mud mounds and trail running then to the “Jerry Can Carry”, which was challenging and included a crawl with the Jerry Can under a wire in a muddy/wet trench. The course made a turn after the Jerry Can obstacle and then had a crossing in a creek and then after another brief trail sprint came to the obstacle “Rope Traverse”, which was at the very same location it was on last year’s NJ course and as always was a very challenging and fun obstacle. The only critique I have regarding the rope traverse is, it always has delays and there is just no real way to prevent that at any race.

The course then made its way back into the woods and a short distance later was “Caving Ladder”, which is a military ladder climb up and ringing a bell. The course then continued for a short sprint and over some gravel mounds and then made it way over to the water and racers had to climb up and on top of a storage container that had a cargo net attached to it and then back down and into only about two feet of water. The course stayed in the water for a very short distance and amount of time and then after exiting the shallow water continued on a sprint for a brief time/distance and came to a “Thru” obstacle, this was part of the obstacle I mentioned at the very beginning as its typically not set up by itself and considered a unique obstacle.

The course went for a brief run on concrete with the venues race track and stadium to the left of racers and made its way over to the stadium, which had the next obstacle “Rope Climb” set up literally in the structure of the stadium. The rope climb wasn’t overly high, but it was high enough and this was another obstacle that in my opinion should have had some sort of mats or hay underneath them to soften the fall if any racers fell from the top of the rope.

At this point if you were either an Elite, doing the 16K two loop course, or like me doing the BFX and multiple laps of the course you will stay to the left and re-enter the course again to repeat. If it was your last lap, you took a hard right and came to the “Tip of the Spear”, which is one of BattleFrog’s signature obstacles. The first part is a traverse with ropes on an extremely slanted wall and then a traverse across the same type of extremely slanted wall using just a hand rail that requires good grip strength and grip endurance to make it across. I did this obstacle near the end of the day so many racers had used it prior to me, but the one I chose was damaged and on the very last section of the grip strength traverse it had come unattached from the slanted wall and when I was trying to traverse across it, it sort of rubber banded back at the wall and crushed my fingers. I was able to complete that last part of the ropes section of this obstacle and literally right after it was the final obstacle of the course, a 4 foot wall. I had wondered when I would see the wall that was typically part of the “Over/Under/Through” and now I did! I hopped over the wall and was done with the course and multiple laps! 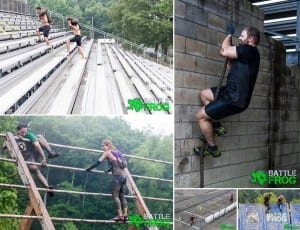 After the race, I had a chance to talk with race director Christopher Acord AKA Beard, who designed and oversaw the course for this NJ event and I was straight up and blunt with him and said this course wasn’t as good as last year’s NJ course or the two Miami courses I ran this year and he pretty much explained that he has three upcoming very tough and hardcore BattleFrog courses and builds scheduled back to back to back and for that reason he took it easy on this one. I have to be honest and say that it is just not fair to those racers in the Tri-State area that won’t be able to attend another BattleFrog race in 2015.

With four previous BattleFrog events under my belt prior to this, my experience is a race company that sets the bar very high right, and from the beginning put on some of the best events and courses in the industry. This NJ BattleFrog event subpar. Coachpain was the only part of the experience that did not take a significant decline and even his involvement has been greatly reduced. I understand BattleFrog is in the middle of a restructuring for the future, but that doesn't mean that the event takes a hit. 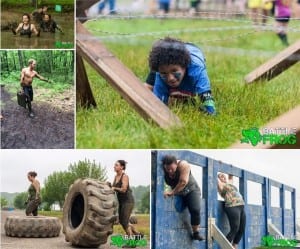 When I left my first BattleFrog last year in NJ I was blown away and impressed with not just the product and course.  But it was the passion and dedication the BattleFrog staff  showed. I was so taken by the experience I still decided to take a day off of work and volunteered my time to help with the next event in Pittsburgh. While the passion is obviously there for some of the BattleFrog employees overall the something is missing these days. After reading reviews and following the Facebook postings, I expected a good event in NJ, but was underwhelmed by the entire experience.

The course wasn’t a bad, but it was just not up to the standards I have come to expect from BattleFrog. I truly hope this was a onetime occurrence. In terms of the overall experience, BattleFrog needs to go back to the drawing board and work on getting back to what they had in the beginning.

As already mentioned, BattleFrog has been doing a lot of restructuring and are clearly still trying to find its way with all these changes. I only hope those that can make changes take the time to really read my article and try to find ways to bring BattleFrog back to what it was only a few months ago.

Based on my experience and fellow racers, I am rating this event a 4.3 out of 5 stars. Some will wonder how I could rate this a 4.3 based on this article, my score is based on comparing this specific event and course not just to previous BattleFrog's but other OCR's as well thus how I determined a 4.3 out of 5.

Have you done a BattleFrog? Share and Rate Your Experience…