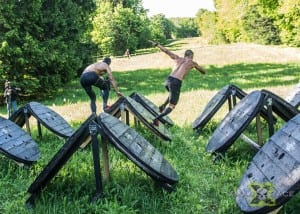 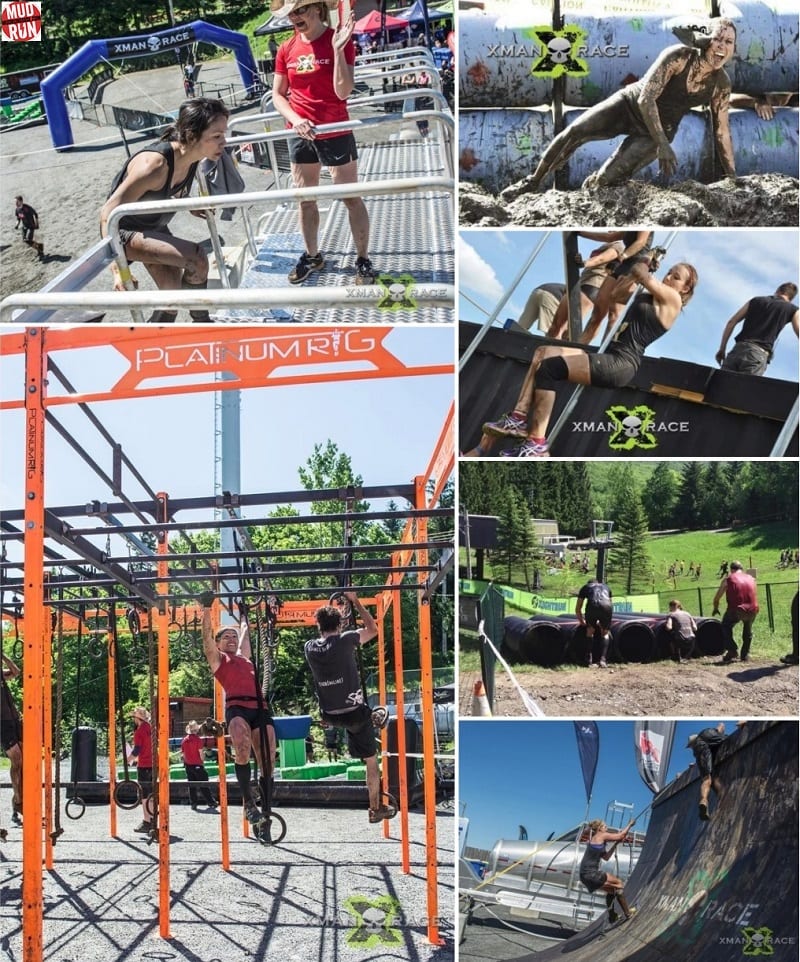 When deciding my 2015 schedule, I researched races in England, Canada, and America and set a goal of trying to do almost every OCR race that looked amazing. When I researched the Xman Race and watched the videos I found, I could tell it was a great race and I decided right away I wanted to do an Xman Race. I drove from New York to Canada on Friday night.

As of late, I have run a lot of courses built on a ski mountain, but Xman built this course way different than the other mountain OCR’s I have run in the past few weeks/months. Instead of a long trail run up the mountain with minimal obstacles, the Xman course only went a brief distance up the mountain and then back down and on each and every snake turn of the course there were challenging obstacles. The course only ventured one time to near the top of the ski mountain, so it wasn’t a course that required long hikes up and rewarded racers that recovered fast and could run down the mountain trail paths. With a total of 49 obstacles this race offered some of the most fun and challenging obstacles I have seen all season.

The course started up the mountain and one of the first obstacles was a barbed wire crawl which was called “X-wife”, this was one of the only obstacles during the elite wave to have any delays. The course had a second barbed wire crawl, called “X-Wife 2”. The course had several balance beam obstacles, with one of them being a decent distance over water that was pretty high up from the water as well as several  wall climbs. This course also included a chain-link fence climb obstacle which I have never seen at any other race and I have to admit, it brought back many childhood memories of growing up in NYC.

One of the fun type obstacles was a water slide, it wasn’t the longest water slide I have ever seen or done, but it was still fun and helped me catch a breath from the mountains and other tough/challenging obstacles. Parts of the course literally went through a strong moving current stream and even at one point took racers through a large metal tube with fast rushing water and a tree stuck dead middle of the tube which required taking time to maneuver around. The step out of the metal tube was high and into water that at least I wasn’t sure was how deep, I was able to get myself down safely and then run/walk through the fast moving stream that went on for some time. I personally really enjoyed the stream parts of the course and for some reason had a very surreal and calming feeling in these sections. At one point just after some of the trail and stream parts of the course came a very long zip-line obstacle over a large pond, the obstacle had a 2×4 that was attached to a wire and racers sat/straddled on the 2×4 and then zip-lined over the pond at a pretty fast speed. I loved this obstacle and wish I could have spent the entire day just re-doing it a 100+ times! 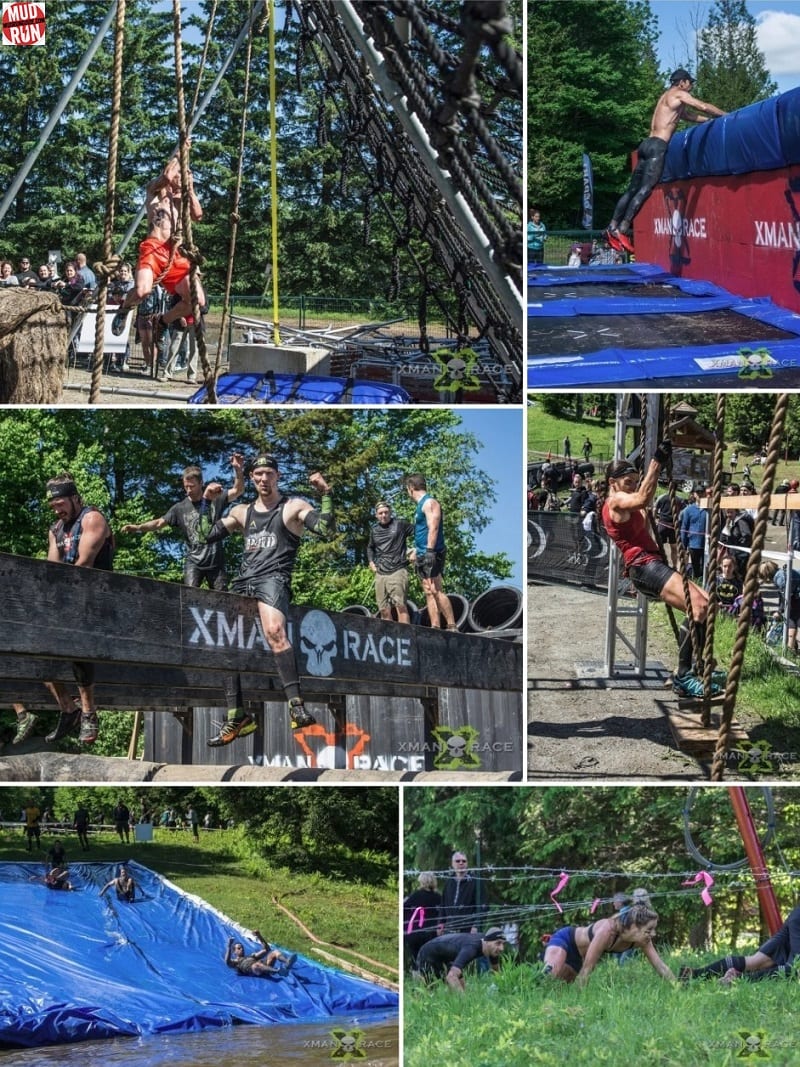 The course also included a challenging rope climb with both ropes with knots and without. There was also a very cool slack-line traverse that was different than any I have done to date and required the use of balance and upper body strength. There was also a log carry and sandbag carry; with the sandbag carry, the course required crawling under two nets, at the first net there was no one under the net when I approached it, so I took the sandbag and hurled it across and over the entire net crawl, which I thought was pretty cool and smart thinking, but a another racer that approached right as I did this gave me a really dirty look, so I felt guilty and crawled with the sandbag under the second net crawl. Not a great deal near the end of the course was a Tarzan rope swing that segwayed right up a rope wall climb which was very challenging and fun. The course also included a trampoline jump that was a challenge and had several different techniques that were proving to work well. The course has several black tube obstacles, one was literally like a kids slide and I was able to slide down on my back. Another tube obstacle was to climb up the tube using a rope, I enjoyed this one, but being a guy with large shoulders, this wasn’t as easy as it looks for me. The monkey bars obstacle was a challenge as it began with typical monkey bars and then had a straight bar section and then finished up with another standard monkey bars section. Also on the course was a very cool and challenging warped wall that was a lot like the one you see on the Ninja Warrior TV show. While on the subject of Ninja Warrior they also had another obstacle that was very much the same theme called “Hell's Path” that required the racer to traverse from one curved small wall to the next (see picture).

Other obstacles that were very challenging and that I cannot go with out mentioning were two back to back curved wall traverses, an under a metal fence water crawl, which most racers did on their back, but I opted to do it face down the entire distance of the obstacle only coming up for air once, and a very cool obstacle that was constructed of two large metal industrial trash containers filled with water and sandwiched between them were two ladder wall climbs, this obstacle happened to be later in the course, so I was very happy to have a chance to take a full dip in to water and cool down my body temperature. The course also had a horizontal rope ladder crossing which was challenging and well placed in the woods during one of the trail runs up the mountain. Two other harder obstacles on the course were a series of ropes with wooden blocks on the bottom that required good coordination and upper body strength. There was also another similar obstacle that had monkey rings on the end of the ropes and required racers to traverse across, I really need to practice traversing across these type of rings that you place your feet in, as I have a hard time with it each and every time. Another obstacle that was one the course and more on the fun factor side was a paintball shooting obstacle, this was actually the only obstacle I failed that required I do the lap penalty (explained below) and it very much bruised my ego as I used to play paintball for a sponsored team and have even competed in several world championships and it took me four shots (one to many) to hit the target. I will argue the paintball gun I used had an extremely dirty barrel and this is why I missed the first three shots!

As mentioned above, the course had a total of 49 obstacles and I haven’t detailed every one of them, but I did make sure to mention most of the obstacles that really stood out due to either being challenging or just plain loads of fun. The final obstacles on the course was the Platinum rig, followed by a cargo net wall climb, and then the last obstacle was the Xtremcar which was a climb up a ladder onto a fuel/liquid carrying tank and then a traverse down a cargo net and then came the finish line!

One last point I have to mention is the penalty for most of the obstacles was lap for a not super long distance either up or down the mountain. The only obstacle that I recall having burpees for a penalty was the Platinum rig. 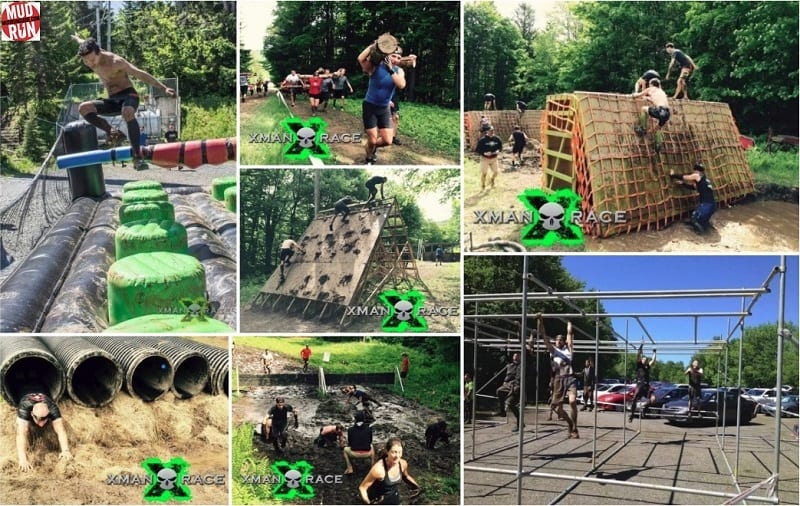 Xman Race was one of my most anticipated races of the year and it did not fail at level to live up to the expectations I had. I am so happy I ran the Xman Race and I am already scrambling to figure out a way to add one if not both of the two Xman races to still be run in 2015.

The schwag was one of the coolest and sexist medals in the OCR business and it also happens to be chrome! I also received a very nice finisher shirt, an Xman Race sticker for my car (this made me very happy), a headband, and a rubber wrist bracelet. All of which are awesome.

The festival area and festival rocked and was good times, the combination of challenging/tough and fun obstacles were amazing and the way the course used the mountain and never went a single long trail run without at least one obstacle was exactly what I wish every OCR course would do regardless of the course distance. I am rating the Xman Race a 5 out of 5 stars.

This past Sunday was exactly my one year anniversary since my first OCR race (Tuxedo Spartan Sprint) and in that year time I ran a total of 57 obstacle course races and I have to rank the Xman Race in the top three overall and if you exclude races in England, it would be tied for my favorite obstacle course race. I suggest all my readers find a way to make it to a future Xman Race.