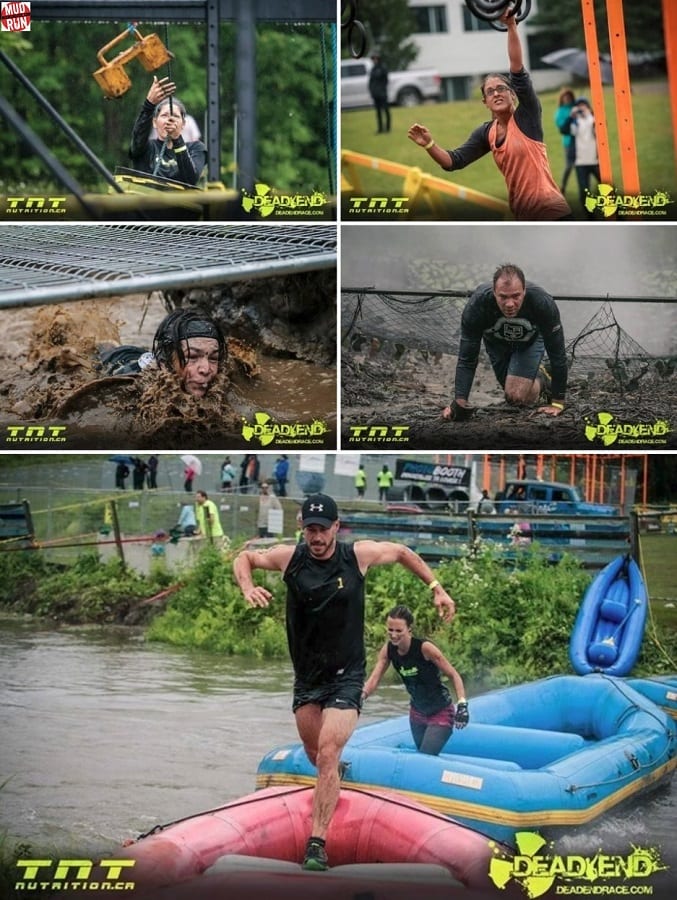 It rained all day on my drive to Canada, but stopped raining once I was in Canada. I had high hopes the weather would clear up and Sunday would be a dry day, but that wasn’t in the deck of cards and I was woken up by start of rain at about 5:50 am Sunday morning and it was very obvious the rain was here for the entire day and it wasn’t going to be on the warmer side.

The day started out cold and raining so prior to the start of wave one most racers and spectator's where huddled up either in a building with heat or under something trying to stay dry. You could see from the racers and spectators faces people were both tired and cold.

With about five minutes to go time, the MC/announcer started getting racers pumped up and motivated and it was like someone flipped a light switch and the racers and spectators all started to get fired up and motivated. I spent a good part of my time at this event on the course and not near the festival area, but when I was around it, people were all smiles and the MC/announcer was doing a great job (in French) keeping everyone happy and motivated. I also talked to a volunteer after the race who said the festival area was really good all day considering the weather.

I had expected it to be just about exactly 5K and maybe up the ski mountain one time, but I found out right away before the wave started it was more like 10K and we would go up the entire ski mountain three times.

The course started out a going up the mountain and almost immediately came to the first obstacle called “Bridge” a slightly inclined wooden ramp racers had to run/walk up and then almost immediately after that was was a series of the black plastic tubes/pipes typically used to crawl through, but this time racers had to jump/climb/hurdle over them. After a series of mud trenches the course made its way up the mountain  and then went into the woods. The course continued to traverse through the woods offering a variety of terrain and various climbing and crawling obstacles. After an 8-foot wall, we continued up to almost the top of the ski resort. Near the top of the mountain came a sandbag carry that made a loop down and back up to where we started.

Once at the top of the mountain the course came out of the woods. The course made its way out of the woods and came to what at first glance I thought was a rest area with porta-potties, but I was very wrong, I opened the door to the porta-potty and discovered it had no toilet or floor in it and I had to climb down through it and into a mud trench filled with a lot of muddy water and then swim/wade for a short distance until I came to another porta-potty that I this time had to climb up into and then open the door and exit. For a very brief moment I must have gotten disoriented, as I thought I was Superman exiting the porta-potty and ready to fight crime! This was an OCR first for me, porta-potties being used as part of an obstacle, and I have to say what an awesome and ingenious idea!

The course now continued on and back down the mountain, first in the open area and then re-entering the woods for a short trail decent and a short time later came to the next obstacle which was a Slosh pipe carry. The carry was down a short path and then back up, I enjoyed this obstacle, but I did get nailed in the head by a woman carrying her pipe and not paying attention to her surroundings.

The course not far from the festival area now and  made its way to a stream, racers entered the stream and made their way over a metal tube we had to crawl through with the stream water running through it. The course almost literally came to the next obstacle that was crossing back over the same stream but this time by climbing on/over three heavy duty rafts.  I really like how this course several times crossed over itself and smartly used one obstacle as two separate challenging obstacles. The course now passed by the remainder of the festival area and then came to the warped wall obstacle, this warped wall had four versions/choices and I was able to get up the second hardest version of the wall on both laps. Once up the wall, racers climbed down and then the course made its way back up the ski mountain. After a brief distance/sprint up the mountain, the next obstacle was two volunteers/staff wearing big bubble suits that both attempted to stop the racers from getting passed. 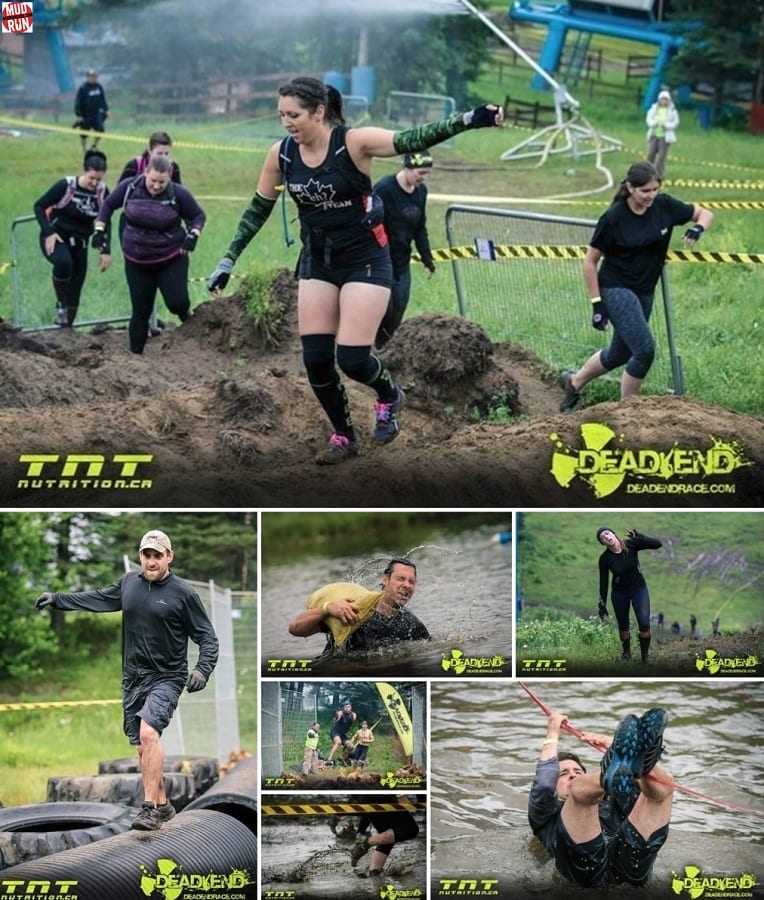 The course continued on a short distance more through some really technical trails and came to a slack-line traverse that had a slack line for the feet, but a loser rope for the hands, I found this was an easy obstacle as long as you used your bodies weight and leverage to be an advantage. The course, once again made it's way to the top of the ski mountain turned and started its way back down the mountain.  The course continued down the mountain in the woods most of the way and then came to a turn back up the mountain and to an obstacle they just called “The Hill”, which was a climb up a pretty steep mountain in what was turning into a very wet and challenging climb. After at the top, all of us racers sat on the ground and slid back down in the mud, due to this, I like to call this obstacle “The Wedgie Maker”!

At this point the course went on another fairly long trail sprint and made its way to the next obstacle which was a wall traverse that began with a hand and foot notches and then segwayed to chains on the wall with only foot notches. I enjoyed this and found it to be a decent challenge. The course then continued on going against the mountain and made its way to one short trail up a small incline and came to the next obstacle that was a slanted wall with a rope called the “Atlas Wall”. Once up and over this obstacle the course continued down the mountain for a short distance and came to the next obstacle which was a fun water slide. The course continued on a short distance back up the mountain and then came to the next obstacle which also happened to be the second obstacle of the course, the black plastic tubes and this time racers crawled through the black tubes we had jumped over at the beginning of the course.  The course now back near the festival area, made its way through a gated fence section and came to a section of the course where the Platinum Rig was set up with a pretty high rope climb, I have never seen this attachment on the Platinum Rig at any of the OCR's its been at, but it's cool and I like it!

After this, the course swept around to and over a road and then the racers climbed over a small fence that is part of the venues property and we made our way over very quickly to a lake and did a second sandbag carry into and through the lake. After completing the sandbag carry, the course went back over the same small fence that is part of the venues property as mentioned above and back across a road and we came to an obstacle that started with a slanted wall rope climb and then took racers over the top of what was the structure used for race day registration and then back down another slanted wall with a rope. The course continued on a very short distance and came back to the Platinum Rig which was set up in a very challenging configuration and even harder due to the constant all day rain. Once past the Platinum Rig, the course went through one last section of fenced in area and over several four foot walls and then came to the finish line and being rewarded one of the sexiest finisher medals in the business! 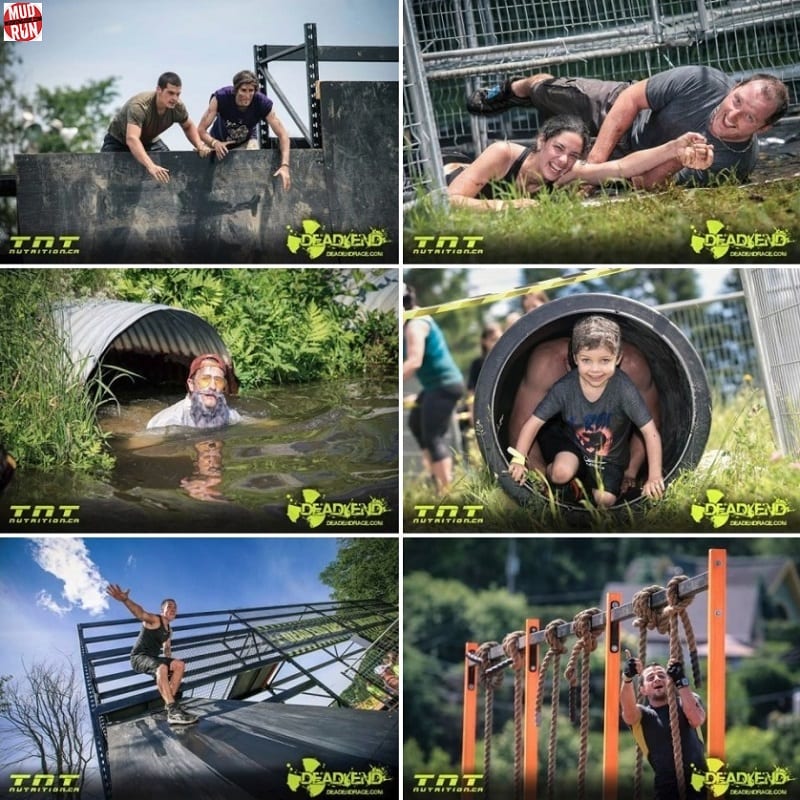 The course was an awesome combination of steep inclined mountain climbs, technical deep woods trails (both up and down), and over forty top quality built and challenging obstacles that made for one of the top obstacle courses I have done in my two years of racing. As I was running the course, I was trying to think of the best way to explain the course and this is what came to mind, if Spartan’s most well-known and respected Race Director Norm Koch could design a course and was not limited to a set number of obstacles and other parameters I imagine the Dead End race course is pretty much what he would design.

I am scheduled to race the second Dead End Race (Apocalypse) on August 30th of this year and that race is the one that lead Race Director and Dead End Race owner Brian Townsend tells me is going to be his hard-core event when it comes to both distance, total obstacles, and most of all challenging racers both mentally and physically and I cannot stress this enough to my readers, come do this race/event and you will not be disappointed!

Amazing course, amazing obstacles, some of the best schwag I have seen/received to date, I am rating this race/event a 5 out of 5 stars.

I am not sure if it’s something in the water or maybe the medical system in Canada, but I have so far done five OCR races this year in Canada and they have all really kicked ass and I cannot stress it enough to other American’s to start adding Canadian obstacle course races to their schedules.

Have you done Dead End Race? Share and Rate your own experience and let us know what you thought…