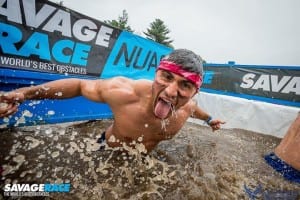 I have had a great time at my two previous Savage Race events. The event in Pennsylvania was highly anticipated with the addition of Garfield Griffiths to the Savage Race team. I drove down the night before to Pennsylvania, I camped out on site and around 6:30 am it started to rain and didn’t let up all day.

It rained all day, at times it came down hard and was a pretty cold day. Despite the weather the Savage Race MC/announcer/pre-race motivator/finish line announcer Jeff Meeks (let’s just call Jeff: Jeff of all trades)did a really good job and really kept the racers, spectators, volunteers, and Savage staff fired up and motivated all day. Even in challenging weather people mingled about the festival area before and after the race. It’s always difficult to have a killer festival in crappy weather, but considering this I think good times were had by just about everyone.

The start of the pro heat was scheduled for 9 am, but only a few minutes before the start Jeff explained that they had been informed of a bad car accident not far from the venue that was causing traffic delays and they were going to delay the start of the wave just a short time to allow racers to arrive. I actually talked to a racer that arrived to the starting line a few minutes late due to the car accident and being delayed, so this was a very nice move by the Savage Race team. 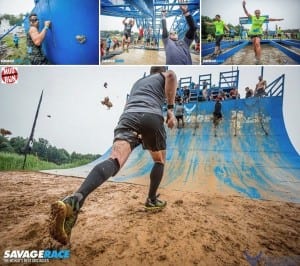 Garfield addressed the racers and went over the rules explaining that the Savage Race pro wave is a complete all obstacles race if racers wanted to compete for the podium, awesome finisher reward, and cash. He also warned the racers that portions of the course went through the woods and were very technical trail runs with lots of rock and debris that racers needed to take notice and avoid.

The course began with a short sprint and came to the first obstacle “Barn Doors”, an easy ladder wall climbThe course continued on for a trail run that felt like at least a good half mile distance and took racers through some of the technical parts of the woods that Garfield mentioned just prior to the start of the wave and then came to the obstacle “Kiss My Walls”, which is a wall traverse that uses real rock hand & foot holdings which were not the largest size and made this a challenging obstacle.

The course went for another fairly long trail sprint in the woods and through some challenging terrain and then came back to the festival area and to the next obstacle “Shriveled Richard”, which is their ice/water tank obstacle. I sat down on the platform and hopped in the tank as far away from the portion that requires racers to go completely under the water and from that spot I held my breath and swam to the exit wall on the other side. It’s funny to see the faces on the volunteers and medical staff assigned to this obstacle each and every time I have done this type of obstacle that way. When I reached “Sawtooth” or what I like to call my nemesis, I paused for a moment! This is the only monkey bars obstacle (in America) I haven't successfully completed to date and it is the reason I didn’t get to keep my pro wrist band on the pro wave. 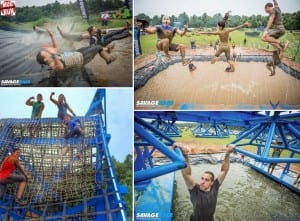 Some of the later obstacles that stood out included “Back Scratcher” which is a combination of climbing over two walls and then crawling under two barbed wire sections with the order being wall, barbed, wall, and last barbed again. The course left the woods for the last time and came to the next obstacle “Thor’s Grundle”, a muddy water crawl in a ditch that has sections that require you go pretty deep in the muddy water to get under. Even though it was raining hard all day, this obstacles muddy water wasn’t near as high as it had been at my previous Savage Races and racers could get under the section without having to put much of their faces in the muddy water. The next obstacle and one of the newer and coolest obstacles Savage Race has is “Wheel World”, which is something you would see on Ninja Warrior and is very challenging even on a dry day, so the rain made it even harder. The object is to monkey bar from a wheel to wheel and it's very challenging to time the traverse from each wheel when the one you are on is spinning around. Later was the next newer and also very cool obstacle “Teeter Tuber”, which has taken the popular OCR obstacle of a black plastic tube to crawl through and converted it into a see-saw tube to crawl up and eventually have your weight bring the tube back down to the other side (just like a see-saw). I will mention the momentum gained when the tube came down was harder than I was expecting and on lap # 2, I went up the tube on my back and think that is (at least for me) the better method on this obstacle. The course was now back next to the festival area and up next was “Blazed” a flame/fire jump. The course than made its way over to “Colossus”, which I was able to get up to the top of, and then I got to slide down the other side of the water slide and finish a fun, wet, and challenging course.

The course was a good one and a lot of the trail portions of this year’s course seemed to be a more technical type of trails to deal with than last year, which when combined with the rain and wet terrain made for an even more challenging course that required racers to really pay attention all the time. The addition of Garfield Griffiths to the team has clearly had an impact in several ways, Savage Race has added some new and very unique to OCR obstacles and even a bigger change is now the pro’s have to complete all obstacles to be eligible for the podium and cash prizes. Savage Race has done a nice job of putting on events that bring both the best pro’s and regular racers looking to have a good time and be challenged and they continue to have a bright future. 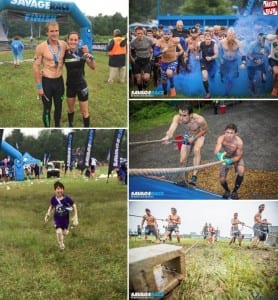 The medal is an attractive one, but it’s really small, but I am still very happy to add it to my 2015 bling collection. The shirt continues to be one of the more stylish shirts in the business and I am sure it will continue to draw attention when I wear it and I will continue to be asked what “Savage Race” is. They also give a free car window sticker at the vendor section which is a nice touch. I also am including Savage Races newest sponsor NuAquos in the schwag section as they provided cups of their energy drink at one of the courses, water stations and a a full bottle to each finisher at the finish line. I found the energy drink to taste good and the addition of protein to an energy drink is a good idea.

Considering the rain, the festival area was really good and as noted above Jeff did a really good job keeping people motivated and having a good time all day. The course was a good and challenging combo of obstacles and technical terrain which for both the pro’s and non-pro racers. The schwag as mentioned is decent as well. I am rating this event a 4.9 out of 5 stars.

It was great to see Savage has continued to create/build better and more important unique to OCR obstacles which makes for a more challenging and fun course. I am looking forward to my next Savage Race in October the Mid-Atlantic race in Maryland.

Have you done a Savage Race? Share and Rate Your Experience with us…