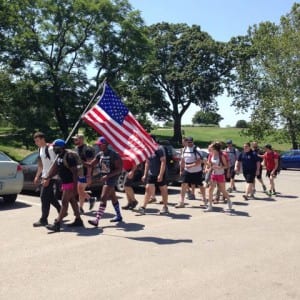 GORUCK (www.goruck.com) held a challenge event in Kansas City recently, called GORUCK Light. For those of you that have heard of GORUCK, but are unfamiliar with an event like this, I will give you a brief rundown of GORUCK before continuing on to details about the actual Kansas City event.

GORUCK events are based off challenges from the selection processes for the US Army’s Special Forces. The cadre are either active or ex-soldiers with experience in Special Operation units (ex. Navy Seals, Army Special Operations Forces, Marine Special Operations, etc.). GORUCK is team building event and challenge but not a race (although they do have a “Kill that 5k” ruck run race). GORUCK events involve group challenges that require movement over several miles. If you have ever seen the documentary, “Two Weeks in Hell” (used to be on Netflix, but I think they may have removed it recently), it is like a light version of team week from that film. 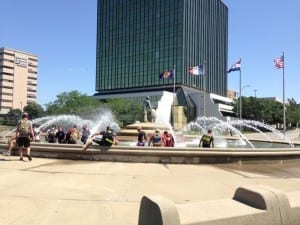 For the Light event, you show up with a 20 lbs. backpack (or 10 lbs. if you are under 150 lbs. bodyweight), not counting any food/water you bring. After a brief introduction and assigning a participant team leader from the 15 at the event, your group moves from point to point throughout the city as directed by the cadre. In addition to each person carrying their own backpack, the group is required to carry team gear. Our team gear consisted of two 5-gallon jugs of water, 100 lbs. sandbag, an additional 20 lbs. backpack, a bag with miscellaneous items (duct tape, tarp, rope, etc.) and several 2×4 boards. There are different ways to carry these items, but it left up to the team to decide if they want to build a contraption or just hand carry everything. Building a contraption to carry the items can make things easier or more difficult depending on how well your carrying mechanism is constructed. The nice thing about carrying all this extra gear is it evens the difficulty level for the group. If you have members that are in better shape, they can carry more weight to help the team achieve their goals. 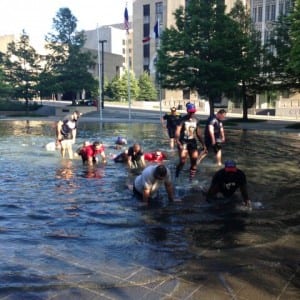 Regarding the Kansas City event, the entire process took about 5 ½ hours and we covered around 7.5 miles. Cadre Brad (the event leader), was friendly and did a great job making things challenging without completely destroying people. As an ex-Special Forces soldier he even shared some war stories and techniques he learned from his extensive training background during the event. The temperature was unusually hot, around 94 degrees, but the heat index was reading a brutal 107 degrees. To survive the high temperatures, we used some of the local Kansas City fountains as a training venue for various exercises including burpees, bear crawls and crab walks.

The nice part about GORUCK events is they do not always start first thing in the morning, which means if you have an Obstacle Course Racing (OCR) addiction, you can still squeeze a race in the morning of a challenge. GORUCK also has a Tough (medium difficulty) and Heavy (hard difficulty) versions, which are longer, 12 and 24 hrs respectively that cover more distance with more weight. Supposedly, the cadre at those events are stricter, but I personally have never participated in one. 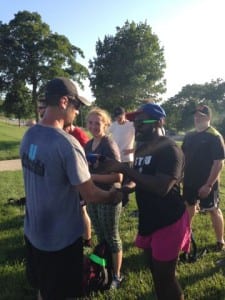 If you like to compete in open waves of OCR, you would probably enjoy a Light, because it was like social hour(s) while exercising. Depending on your fitness level and desired challenge you may even like the Tough or Heavy version of GORUCK. If you are also someone that loves all things military (movies about the military, books about the military, guns, etc.), the event gives you a brief glimpse of what part of their selection process looks like without incurring the military commitment. GORUCK also provides a chance to interact and ask questions with the men of the US Military’s Special Operation Forces. If you normally compete in the competitive wave of OCR, it is good supplemental strength training and depending on your fitness level, you may want to just train through the event instead of tapering to make it more challenging. While it was great meeting a whole group of new athletes, I think it would be even better if you went to an event already knowing a couple of people in the group. Although not a race, I think GORUCK has options that allow it to be a great training tool or event for all members of the OCR community.

All photos were taken by Nik Johannesen

Have you done a GORUCK? Share and Rate Your own experience with us…