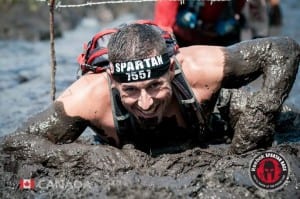 Spartan Canada has the festival and spectator area down to the perfect science. They continue to have a great DJ who plays great music all day, great vendor booths with free samples from local companies and sponsors. They also have an amazing turnout for the kids race (was only held Saturday at this event) which makes for a fun family outing. One observation, we made at this event, was they placed porta-potties throughout the festival area and not just at one central location. This isn’t something I noticed previously, but it’s a brilliant idea that should be continued at all future events. 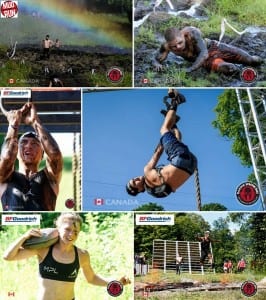 Super: Both the Sprint on Saturday and the Super on Sunday started from the same starting point and began by going up the same ski mountain. This was the shortest ski mountain to date, but the baking sun and hot & humid weekend made up for the mountains stature.

The first obstacle on both versions of the course was about a quarter of a mile up and was a camo net crawl.  We trekked  up the mountain to through several obstacles. We reached the top of the mountain made a turn to start its way back down and just prior came to “Cargo Net” climb, a nice and simple challenge as long as you are not afraid of heights. Just after the net was the location of the first water station and on such a scorching hot day, water was needed early and often.

The course now continued with a sprint from the very top to the bottom of the mountain. As we approached the festival area the rope climb appeared. The Canadian Spartan Races do not place the ropes over water, but rather over some hay. This makes for an easier rope climb. After a few more obstacles including the hercules hoist and Z wall was another water stations (YAY) and then just past that was the “Monkey Bars”, which are very different than normal monkey bars as they are a smaller bar in length to hold onto and go further than in the USA. 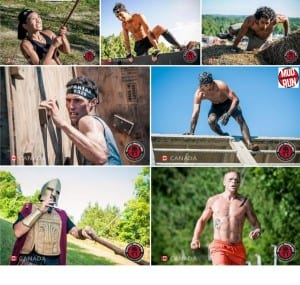 After the climbing over a wall, the course went back down the mountain for a brief distance and once back on flatter ground, it was time for another “Camo Net” crawl, this was the third and hardest of the Camo net crawls on the course both days. Just to the left of the net crawl was the next obstacle, the sandbag carry. The volunteer at this obstacle was stationed there both days and she was such a wonderful woman to see each lap on both days. Just after the sandbag, was another water station (YAY again) and then it was time to go off into the woods for a brief sprint out of the direct sunlight, which was a nice break from the killer sun both days. On the Super version of the course, this was the main difference from the Sprint, as the wooded trail went further into the woods and away from the festival area and eventually came out to the Atlas Carry.

At this point, the course turned and went back up the mountain, this was the hardest part of the course as this section of the mountain was steep and directly in the blistering sun. Once near the top of the mountain, the course came to a “Jerry Can Carry”, which was two Jerry cans for the men and one can for the women.  Just past this was another water station and the volunteers were nice enough to educate racers this was the second from last of the water stations so it was a good idea to fill up! We headed back down the mountain for the last time, completing a tire drag along the way. 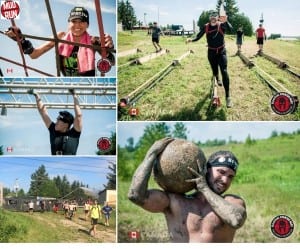 As we neared the finish, I saw Misty Diaz, an athlete I admire. We continued down and through a few more obstacles. At this point the course made its way over to and into the woods and stayed in the woods for some time, this section of the course had some brutal thick and deep mud that took every bit of energy and cardio most of us had left to get through. Just past what seemed like a mile of mud (it wasn’t) was a barbed wire crawl, which after dealing with the mud was a nice welcomed chance to crawl on my hands and knees for a moment!

This was my third trip to Canada for a Spartan Canada event and like the first two; I was very excited to be going back to Canada and to another Spartan Canada event. Just like the first two events, registration was super-fast and nice and easy and completed in less than a total of two minutes.The spear toss in Canada is a little shorter a toss in distance than America and I am happy to report between my laps and just messing around teaching out runners, I was nine for nine on the weekend. Literally a few hundred feet away was the next obstacle the inverted wall, which was a nice challenging obstacle to place this late into the course. The course then continued a short distance further and came to “Dip Walk”, which are dip bars to hand walk or some racers do a tummy walk across the two bars. After the dip walk, the course went a short distance more and came to several mud pits and then immediately to a barbed wire crawl in mud that smelled bad and was covered with earthworms. The “Platinum Rig” was one of the last obstacles which was configured slightly differently each day. Just after the rig, only a few hundred feet away was all metal “Slip Wall” with a rope to assist (if needed) and then once racers climbed down the slip wall, it was a few hundred meter sprint to the “Fire Jump” and just after that, the finish line!

Sprint: The Saturday Sprint version of the course consisted of a total of the nineteen to twenty of the obstacles mentioned above and the change over to the Super version for the most part started with the Atlas Ball Carry all the way to the Spear toss. From the Spear toss, to the finish line was shared by both versions of the course.

Every time I have gone to Canada for an OCR this year, I have left happy. This race weekend was no different and I had a blast. This was the easiest of the three Sprints I have so far done in Canada, but the massive heat and humidity made up for that big time. I also finally had the opportunity to meet Spartan Co-founder Selica Sevigny, who was hard at work all weekend at this event and still took time to talk to me.

The newly designed medal for 2015 is nice and one, I am happy to add it to my medal collection. Spartan also went away from one generic finisher shirt and now have a unique shirt for each course/distance.

Spartan Canada uses a slightly different designed finisher shirt that is made out of a Dry-Fit type material and the medal has one minor difference compared to the USA Spartan medal, it does not include the year on the medal or a Trifecta pie piece.

I had to think about this, everything about this event was a five out of five stars rating, but especially the Sprint version of the course was not as challenging as it was just two weeks prior in Ottawa. From what I learned talking to several Canadian racers, this specific Toronto event is known and expected to be easier than some of the other events, which brings an additional type of racer to this venue. Based on this information, I am rating the event a 4.9 out of 5 stars.

Have you done a Spartan Race in Canada? Share and Rate your own experience with us on our site…