The inaugural 2015 Nashville Spartan Sprint was held October 24th at Fort Campbell, Kentucky on the scenic grounds of Fort Campbell itself. The 5.34-mile course only boasted 154 feet of total elevation gain which made it one of the easiest Spartan Races I’ve ever done. The temperature was in the upper 60’s most of the day with overcast skies and occasional rain that made for pretty comfortable racing conditions. The parking for the event was located in the grass fields along the gravel road leading to the event site. As usual, Spartan made you walk half a mile to get to registration. Everything about the registration and vendor area was pretty standard except for soldiers walking around in their dress BDU’s, which was a cool addition. 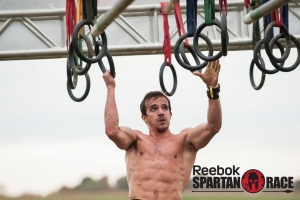 The course started by running across the same grass fields that we parked near for about ¾ of a mile. Spartan then started putting obstacles like a hay bale climb and the military hurdles along this route until we came to a small bridge where the bucket brigade was located. This was the easiest and shortest bucket brigade I’ve personally done. We then ran through more grass fields and some smooth wooded terrain before coming across the 6- and 8-foot walls followed by the Z traverse wall. The course continued along a route which led us through a training area where military personnel practiced building entries, and then it was on to the standard rig. 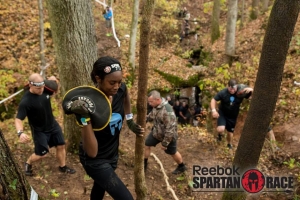 ling once again through a lightly wooded area, we were led to the sandbag carry that, while short, was actually on a technical hill loaded with moss covered rocks. The sandbag finish led athletes into a natural cave where Spartan was smart enough to place their first photographer. Spartan then led us through a small creek with steep banks that were difficult to get over, before leading us back along a grassy trail towards the festival area. The mud pits and a long, grassy barbed wire crawl were up next for us on our way to the dry rope climb. Now is when Spartan did something unique to the army base. We were given plastic dummy M16 “guns” and were led through windows and rooms of a few of their training buildings complete with smoke bombs. This would have made an excellent photo opportunity, but I didn’t see any photographers along this part of the route. Once we finished “clearing” the building, the spear throw was next, followed by the Hercules Hoist. 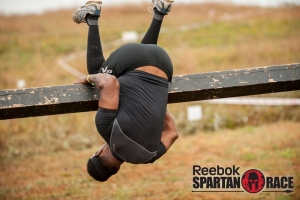 fire jump and finished the course. I was left with a feeling that they could have done more with the course and that I hadn’t been tested as I wanted. Spartan did go the extra mile and had a unique, military inspired finisher’s medal. But other than that, the course was relatively plain and predictable.