Michael Land writes of his experience at OCR World Championships. 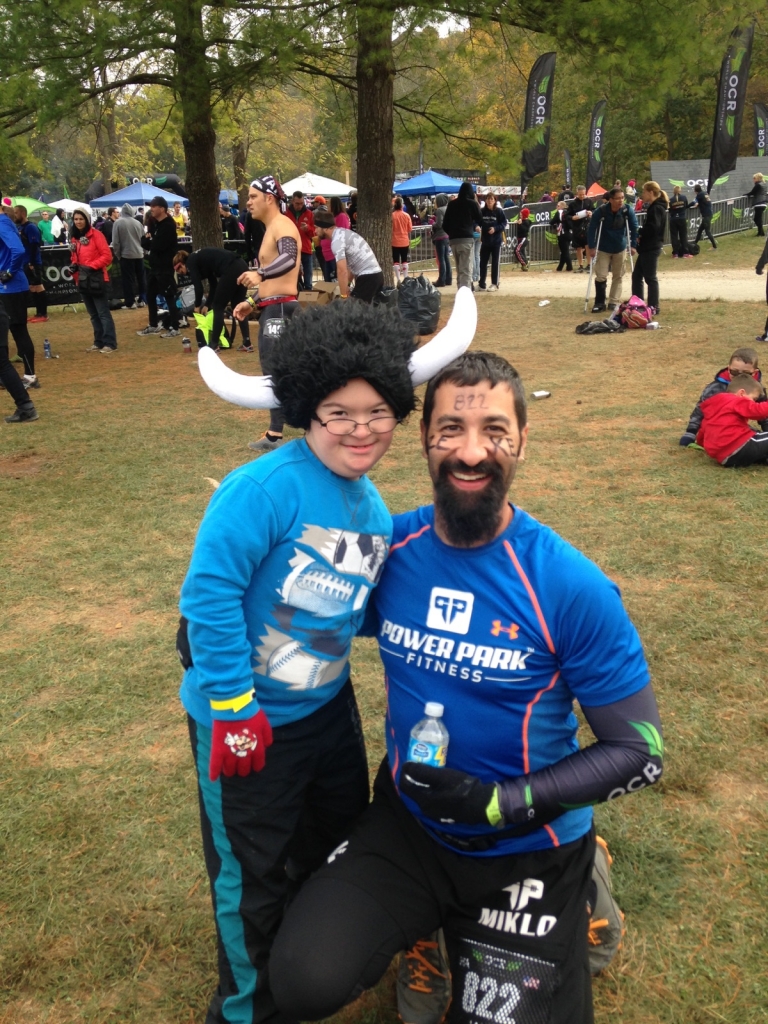 There is a group called IRUN4 (www.whoirun4.com) where athletes of all levels and kinds are paired with children and adults with physical, mental, and developmental special needs. I was paired with my running buddy Zeke a little over a year ago. In that time, I have gotten to know him and his family by sharing my training, traveling and OCR experiences as well as sending him medals, shirts, and small gifts when I can. They keep me updated on his education and accomplishments; Zeke participated in Special Olympics. Also, they live only a few hours away from the venue that hosted the OCR World Championship.

On Friday, Zeke’s family traveled to OCR World Championships so that a couple of running buddies could meet for the first time in person. We met and I was able to show them around the festival area. As we walked, I described some of the obstacles and showed them Skull Valley. My wife Leah, and I helped build Skull Valley, so it had a special place in the weekend’s events. As they departed, we planned to meet again on race day.

Race day. 11 A.M. Time to warm up. I find Zeke, Zeke’s parents and his three siblings in the festival area the morning of the race. My heart swelled as I approached Zeke, he was wearing the Viking helmet from Warrior Dash that I had sent him months earlier. Zeke and family were there at the fence to see me off as I started my OCR World Championships Race dedicated to Zeke.

With the fan-friendly course design, it made for perfect viewing for Zeke and his family. When I got to the top of Castle (the three story up and over obstacle), I looked down to see and hear Zeke calling my name. With the verbal boost, I hi-fived my buddy as I ran by. I conquered the Destroyer and Toughest’s Dragon’s Back as Zeke and family watched. Over the Tires Jump. Over the Irish Table and Hurdles. Zeke's family still there. On to the crazy Monkey Bars. They were with me all the way. This was when I realized my wife and teammates were there as well. 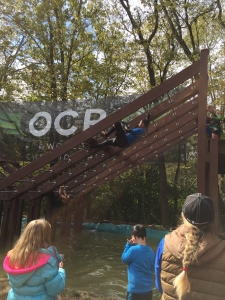 I barely got through the Monkey Bars, climbed down, and my left arm had become almost useless. I pulled something…that’s it. Less than three miles in and already injured. “Well…I may not keep the band, but I will finish this course and get that medal” was my thought.

As I got to each obstacle and completed it, I thought to myself, “Well, one more obstacle down, I’ll likely fail the next one.” Not the best mantra, but the truth.

I got through the Cargo Net, Inverted Wall, Balance Beams, Over Under, Sternum Checker #1 and others. Coming out of the woods at Platinum Rig #1 my treasured cheering section was there. Zeke his family and my teammates together. I conquered the Rig and stopped to have my picture taken. Before the race, I had a complete stranger write Z-E-K-E on my face so my buddy would know that he was on the course with me.

Back into the woods for more mileage and obstacles. As I exited wooded sections, my teammates were there to cheer me on, boosting me up and encouraging me to continue, with Zeke and family in the festival area always on my mind. As I exited the long slip and slide, cold and exhuasted, there was my wife, my biggest supporter cheering. Only a few more obstacles to conquer before the finish and I still had my band. 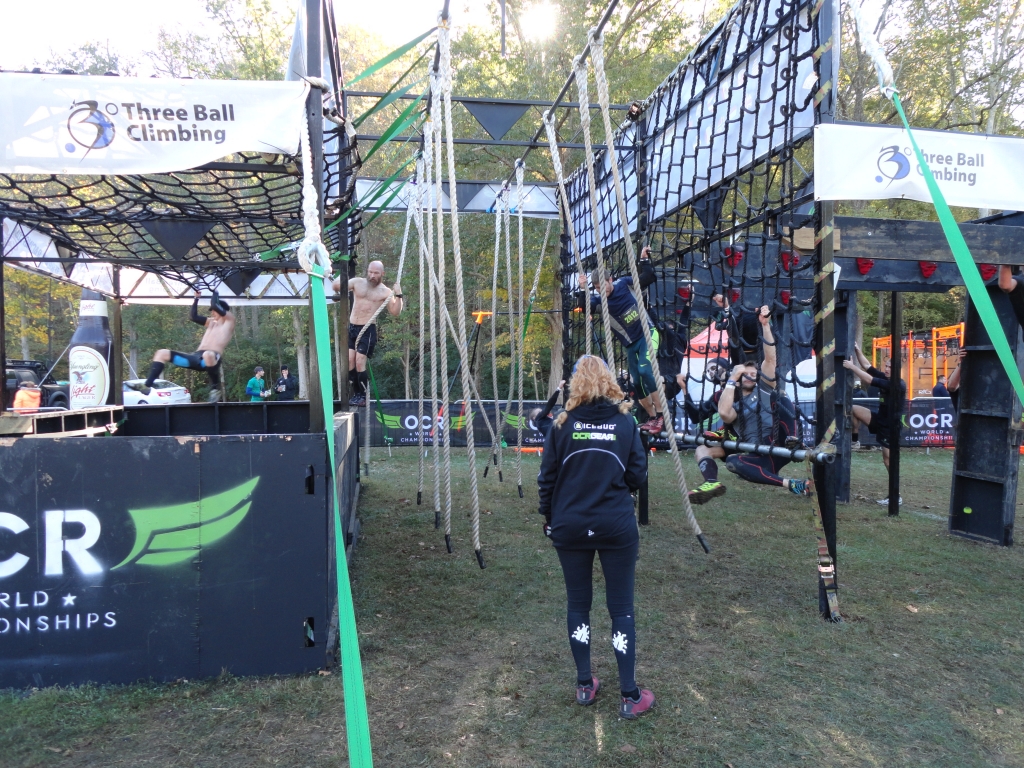 I prepared myself for a few minutes and made my way to the front of the line. Skulls first then under the cargo no problem. Rope one, check, transition to rope two and my forearms cramp and I slide down and touch the ground. Failure. Back to the back to get in line.

I stumble over toward the fence where my wife, Leah, was waiting with encouraging words and my legs start to wobble, and I collapse to the ground. After a few moments, I crawled over to her.

Matt Willis was there to wrap an emergency blanket around me, and Leah ordered me to finish the remainder of my race fuel. Adrian Bijanada came over to check on me. I composed myself and went back in line. While waiting, freezing, Yancy Culp, my trainer, was there with some motivational words. Waiting, freezing, waiting, freezing, I was at the front of the line.

Skulls, under cargo, rope, rope. I’M ON THE FIRST WALL. Yes. Now it’s just the Cargo Net Monkey bars. I got about half way across, and I couldn't make my hands work. I hung there for almost 30 seconds and then fell. Failure. I climbed out and wobbled my way to where Matt, Yancy, Alex, Ben and Leah were standing.

My legs failed again, and I collapse to the ground. I was told later that I had a glassy stare and was looking dreadful. They were afraid medical was going to pull me for hypothermia. I wanted to quit. I felt that I had nothing left. I was on borrowed time. I shouldn’t have made it this far with my band. It would be fitting to fail on the obstacle that I helped build. They made me take off my arm sleeves, shirts and pull down my calf compression. “Get up and jog around. You have to get warm.”

I pulled myself to my feet and started to move towards the finish line. “Not that way,” says Brett Stewart of Mud Run Guide. I about face and trot back to the area behind the waiting crowd to jog around for a bit. Moving around made me feel better and gave me the confidence to not give up. This is what I had been training for all year. I was 30 yards from the finish.  Zeke had been there the entire time watching and cheering me on.

Attempt three – Skulls, done. Under Cargo. Done. Rope, rope, to the first wall. I lean out as far as I can out on the cargo net, swing my legs out into space…I’m on top of the far wall. DONE. COMPLETED. CONQUERED. I then proceed to scream my head off. It was primal. All of the failures, the emotion, the encouragement from my friends and family. I punched a support beam of the obstacle. 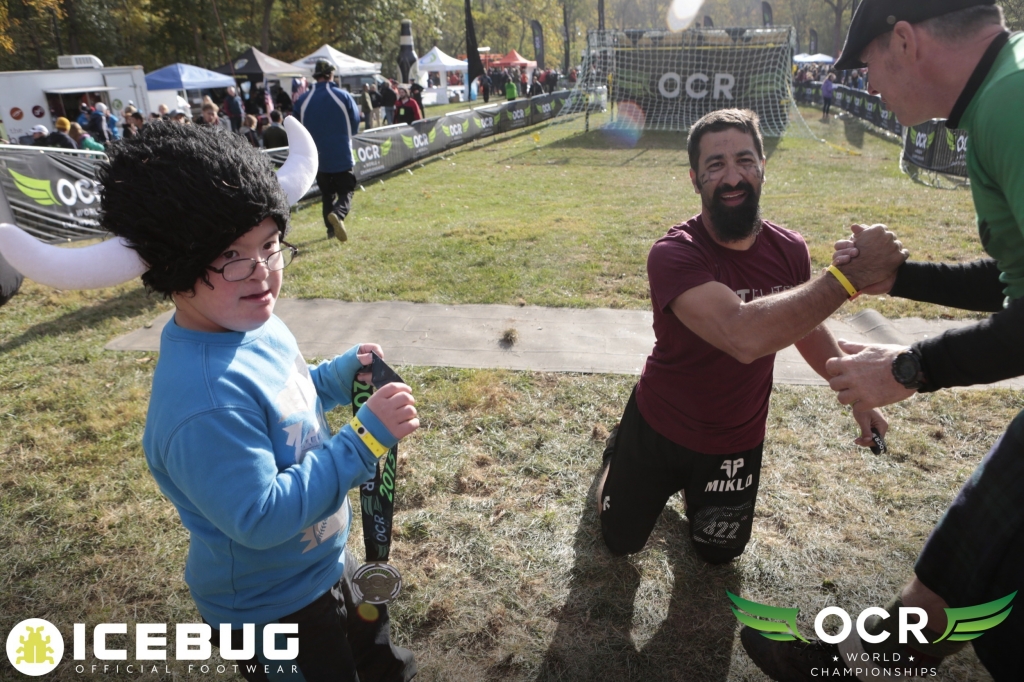 I jumped down to the ground and took off like I was shot out of canon. Up the Warped Wall like it was nothing, across and down the cargo net. I reach the bottom and look to my right to see Zeke at the fence smiling. I run over to him, lift him up and over the railing onto the course. We head toward the finish line hand in hand. We cross the line; I fall to my knees to give Zeke a big hug and tell him, “We did it. We did it.” The volunteer handing out medals gave one to Zeke so that he could put it around my neck. It was the perfect ending to an epic day.

This was the pinnacle of my racing career. This was my podium. I didn’t even bother to check my results. I didn’t care. I kept my band. I met my buddy. He put the medal around my neck at the finish. That’s enough for me.

Share your stories and feedback from OCR World Championships with us…

About the Author: Michael Land