Behind the Scenes: BattleFrog Build Atlanta – Getting to Play on the Obstacles! Most obstacle course racing (OCR) builds have one simple rule…outside the basic safety rules…and that is ‘don't play on the obstacles'.  Play, of course, can be defined many ways, but short of going to trial over it, they mean trying them out.  Mostly because they may not be finished….which can be very embarrassing if you pull down an incomplete obstacle while you're supposed to be putting up barriers somewhere else.

On Wednesday, I'd spent the day working on parking and directions with Rich from BattleFrog.  I covered this in my last article, Are we Expecting too Much From OCR?.  So onto Thursday, I was reassigned to the festival area where I was reunited with Brandon and Robert from BattleFrog Pittsburgh infamy. 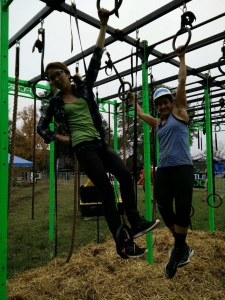 ince it was Thursday, most of the major work had been completed, and finishing touches were all that was left.  We got to play ‘roadie' for a bit…moving all the audio equipment out of the semi trailer…into the barn…then a few hours later moving it back out of the barn and onto the stage.  Highly recommended workout, by the way, lifting, carrying and dragging around 100 lb+ plastic containers!

Afterwards, we worked on putting together some of the blade signage.  Not an especially exciting episode, but that's where Tracy and Crystal come into the story…and that will have a lot to do with playing on the obstacles later on!  Another typically ignored part of the build day is lunch.  This day, though, I had the great opportunity to speak with Blind Pete…an extraordinary OCR racer who happened to be working on the build too. 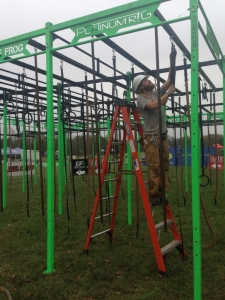 Apparently our minds, Pete's and mine, have a similar tilt when it comes to placing limits on what we can do.  In particular, Pete thought it would be great to be able to work on one of the obstacles.  I thought it would be even better to work with Pete on using the 10lb sledgehammer to drive in tent stakes.  Since this apparently didn't involve playing on an obstacle, I didn't see any reason for not trying it..and I'm a firm believer that it's better to ask forgiveness than permission.  I would just need some cooperation from one of the build crew.

As fate would have it, all things came together mid-afternoon!  Pete was down in the festival area.  An ATV was sitting there with a 10lb sledge.  And the tent stakes were a short walk away…a very short walk away.  So, the mission was accomplished, no one injured and we even have the photos to prove it! 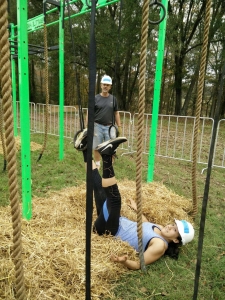 So, now we finally come to the fun part of the build!  We'd been tossing around hay bales and putting in some BFX and Elite signage for a while.  Much of it within shouting distance of the final rig obstacle, just as Lee was fitting it out at the time with the race configuration.  And unbeknownst to me, they apparently need to have this “racer tested” to make sure they weren't too easy.  Easy meaning that I could make it more than halfway through on my best attempt.

Normally, I suppose they have some of the crew to do this.  But they wanted a test of the women's lanes and well…here's where Tracy and Crystal come back into the story.  I'm not sure exactly how it came to be, but at some point they were asked to give it a shot.  Me, of course, not wanting to stop what I was working on, dropped everything and made a bee-line for the rig too. 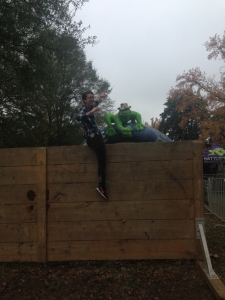 It's exceedingly rare to be able to try out an obstacle during the build. So we all enjoyed that opportunity!  Both Tracy and Crystal managed to finish it…as did Lee and Brandon, still wearing their hard hats I think.  I did what Einstein used to call a Thought Experiment on the men's lane.  I did try it several times but ended the same as the thought experiment did…with a non-completion, to put it nicely.  We were told at the time (although this apparently didn't play out on race day) that only the BFX and Elite men had to do those men's lanes, so I gave a shot to the other lane.  Considering that this was the first real test of my shoulder since July, I was pretty happy to make it half way through the rig…a personal best!  That would have to be enough for me, though, as race day was a major fail on both rigs.

So for a short…and very enjoyable…time, we got to do what most volunteers never do.  We got to play on the obstacle.  And for anyone who's had difficulty with an obstacle before, having a chance to train on it…even with your gear and hard hat still on…is an opportunity not to be passed up.  It was worth the price of admission!

Have you helped out on a build?

What was your experience?

0shares
Disclaimer: The viewpoints expressed by the authors do not necessarily reflect the opinions, viewpoints and official policies of Mud Run Guide LLC, or their staff. The comments posted on this Website are solely the opinions of the posters.
By John W|2015-12-04T14:44:55-05:00November 12th, 2015|Op-Ed|0 Comments