Humor: Designing Your Own Obstacle Race Hey, how hard could it be to put on an Obstacle Course Racing (OCR) event?!  Why should those big race promoters make all the money?  After all, it's just a bunch of people paying to run through dirt and mud, right?  So…if you're ready to take the plunge and cash in on the exploding sport of OCR, here are some tips to make your event one to remember! 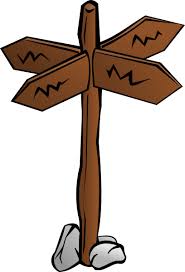 The first thing you have to do is pick out a venue.  This is probably the most important decision you'll make.  Everything you do will hinge on this choice…so make the right one!  Now you could go out and look at venues that other races have used in the past.  But that's going be some big bucks…tens of thousands of dollars!  So best to look at some place that no one's used before.  And unless you have a huge yard, you'll have to go off your property.

We Don't Need No Stinking Insurance

Ideally, if you back up to some unused wooded property, that solves your problem right there (just make sure no one actually knows you live there…why should become apparent later on).  Maybe there are vast empty woods nearby that no one pays attention to.  You're worried that you don't own that property?  Maybe they'll want too much to lease?  Obviously, that's why you don't tell them!!  Using someone else's property can save your bacon too on insurance.  The real owners certainly should have some. What can go wrong really and obstacle racers are used to falling off stuff.  If done correctly, by the time the owners know what's going on, you'll be half way to the bank and thinking about your next race promotion! 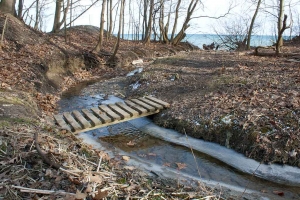 Now that you've…uh…secured your course site, it's time to start planning the course.  Don't waste a lot of energy on this one, though.  Most race directors will make multiple trips to a site, go over any available aerial views as well as their on-site tours.  You don't have the time or probably the patience for all that.  Time is money!  Just head 'em out on some pseudo trail and they'll be okay.  As far as marking the trail, if you decide to have even a formal trail, put a ribbon around some trees here and there.  These are big boys and girls.  If they get lost in the woods, it's their own fault!  Once the first groups goes, the trail will get marked by the traffic saving you countless hours and even more money on arrow signs and marking tape.  Hey, no matter what happens eventually they'll find their way back, just like cows at Christmas.  And course maps, course maps are a crutch.  OCR racers don't need crutches!

One thing you don't want to ignore altogether is sponsors.  Here's a way for you to push off what minimal expenses you have by getting them to pay you to be there.   Let's face it, the NFL may be the big dog in sports, but OCR is the rising star and sponsors will be lining up to throw money your way.  And if you can land a beer sponsor with free beer at the end of the race…that's all the racers are there for anyway!

While you're at it, don't forget the festival area.  Once more, a few yard-sale popup tents, and some chicken wire fence should do the trick.  The sponsors should bring their stuff.  You just need some way to pen in the spectators.  These are the cash cows of your retirement plan.  Charge them to park, charge them to come in and watch them buy you out of merch!  (You do have merchandise don't you??!!)

Did You Forget About the Obstacles 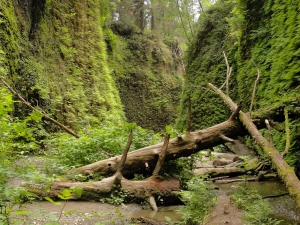 Now you have to come up with some obstacles.  Again, the big races are spending tens of thousands of dollars to design and build safe obstacles to quickly assemble and disassemble for transport.  Some have even built ginormous (and expensive) obstacles and left them at the venue for future races.  You don't have that kind of money to waste!  So stick to natural obstacles.  Throw some tree trunks and tree branches across the trails once in a while.  Maybe lean a few, so the racers have to duck under or jump over.  If there's water on the property make sure you pass through it as many times as possible.  This will give the racers the feel that they're covering a lot of real estate.  Old tires to walk through and carry.  Some old rope around concrete blocks can be dragged around.  Want a bucket carry?  Have a BYOB (bring your own bucket) carry and let them shovel their own dirt into it.  You can even have some bug infested pieces of logs to carry around.  Anything to make the experience seem more miserable…they love that! 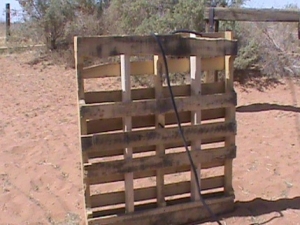 If you feel you must provide some artificial obstacles, build them out of wood (we'll cover why later).  One thing, the materials will be cheaper and easier for any idiot to work with.  So you don't need to worry about who your build crew is if you have a build crew, I mean.  Walls are easy and they don't need to be overly sturdy.  Some will fall.  But then you can prop them up off the ground and make them crawling obstacles.  One obstacle you do have to have is a barbed wire crawl.  The easiest way is if you can find barbed wire fencing somewhere on the property.  Remove the barbed wire carefully, so as not to break it, you can string this along anywhere between trees is good enough get a hose to make some mud and you are done.  If the barbed wire doesn't come off that way, just make the obstacle crawl back and forth through the fence.  It's different, tough and potentially extremely painful, so the racers will love that too!  Of course, at the end you'll need a fire jump.  A few yard-sale bbq's should do. Just remember to spray some starter fluid in periodically to flame it up!  Just try not to hit the racers…that would be bad.

Time to Advertise and Promote Your Race 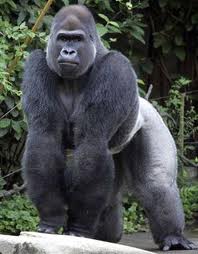 Here's another no-brainer.  Who doesn't want to do an OCR race these days?  But before you promote, you have to have a name!  Whatever verbiage marvel you come up with, remember…Ultimate…Mud…Fest…should always show up in the name somewhere.  And when you do promote it, make sure you mention that it's the ‘Most Fun,' ‘Toughest,' ‘Badass-ist” mud run ever!  Do that and you have no worries people will sign up in droves.  You should also set your prices sky high!  Not only will this load your pockets with cash for race day sign ups, but it will make your ludicrous early-bird entry fees look good by comparison.

You should also be thinking about prize money at this point.  Don't cheap out here either!  This will help attract elite racers who then will attract all their Facebook friends and followers.  Afraid this could break your bank? (do you even have a bank?!)  Don't be.  Go big because remember, you make the rules.  And to win the prize money you have to complete all the obstacles.  What they won't know until race day is that the last obstacle is to steal a bunch of bananas from an 800 pound, psychopathic silver-back gorilla armed with a couple of spike studded two by fours.  No worries there!

You must give some thought to this ok; that's enough thought.  Safety?  This is OCR it's not supposed to be safe!  Safety's a crutch!  Real racers know this.  And speaking of crutches, so are Medical Personnel.  But if your bleeding little heart feels the need for medical personnel to be on site, see if you can get the local fire department volunteers to have a picnic nearby.  Most of them have at least some basic emergency medical training, and they can't help coming to aid anyone that does get hurt.  Speaking of crutches, though, while you're out at a yard sale, see if you can pick up a few pairs.  Getting someone on crutches can get them off the property quicker so it won't slow down the clean-up later!

Every race has water stations. Once again, you want to buck the system. Be different! Go dry!  Water costs money and takes some time to set up.  Not only that but who's going to give it out?  You didn't bother to arrange for any volunteers.  They can always drink whatever water there is on the course.  Babying racers is no way to operate your first race.  Remember…Toughest…Badass–ist…

I know, your first thought about parking is; who cares?  Race day is a little late for people to worry about parking issues.  But think!  Parking can be another big payday for you.  And this is even easier than finding the race site.  All you need is relatively flat ground with some gate access to the main road…and once again, it doesn't even have to be yours!  Collect the fees and walk (run?) away.  If the property owner does find out, they'll be way too busy with the car owners to worry about you until well after you've closed shop.  Money…in…the…bank! 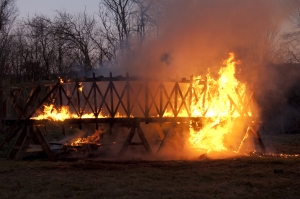 Course breakdown and cleanup may be the easiest part of the whole process.  And that's saying a lot, considering how little effort you put into this.  Obviously there's no need to do anything with the logs.  Remember the wood obstacles?  And hopefully, you have some lighter fluid left over too.  Now drag all the ropes, tires and anything else that will burn to your wooden obstacles and well. I think you can figure out what to do next.  Obstacles are gone…problem solved!  And hey, you still have the fire department nearby if anything does get out of hand.

And finally, there's the cleanup.  No matter how careful people are, there will always be debris.  Someone has to clean this up.  Someone else that is!  This isn't your property why should you have to clean up?  You may want to check the property to make sure no one got left behind.  More than likely, though, you'll be dragging your bags of cash to the car and looking forward to a counting your profits back at the home.  I know I would!

You're now a big-time OCR race promoter…Welcome to the club!!

0shares
Disclaimer: The viewpoints expressed by the authors do not necessarily reflect the opinions, viewpoints and official policies of Mud Run Guide LLC, or their staff. The comments posted on this Website are solely the opinions of the posters.
By John W|2015-11-03T13:07:31-05:00November 3rd, 2015|Op-Ed|0 Comments