Spartan Race TV Show – A Response to a Response… If you are just joining us, I wrote an article last week about why I didn’t apply for the Spartan TV show (check it out here). The next day Rose Wetzel and Evan Dollard wrote a response (here). After reading my article again looking through Rose or Evan’s lens, I can easily see how they could interpret some of my statements as offensive. I do stand by my original article but here is my attempt at a brief clarification. If you haven’t read the first two articles, I would probably go back and hit those up now. 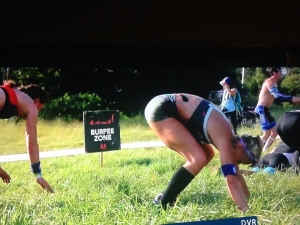 Hopefully, that clarifies things, and if there are still hard feelings just know they are not coming from me. To prove I have no hard feelings here is a video of Evan Dollard destroying me at OCR Warrior and a still image of Rose Wetzel at Spartan Super PA where she eventually passed me finishing with a sizeable lead. Like any competitive athlete, I am always up for a challenge though, so if there are still hard feelings…you know where to find me on Nov. 14th –  World's Toughest Mudder – and we can race at a distance I tend to do better at than short distance OCRs.   😉

0shares
Disclaimer: The viewpoints expressed by the authors do not necessarily reflect the opinions, viewpoints and official policies of Mud Run Guide LLC, or their staff. The comments posted on this Website are solely the opinions of the posters.
By Evan Perperis|2015-11-02T11:51:37-05:00November 3rd, 2015|Op-Ed|3 Comments