In case, the title of this article has you scratching your head thinking “how can clawing through mud and climbing ropes help change the world?” I’m glad I’ve got your attention.  Obstacle Course Races (OCR’s), and their 2nd cousin the mud run have many benefits to the individual and the community.  Expanded outside of the local community – OCR actually can change the world.

Obstacle course racing for the elite level competitor is a race.  But for the thousands of non-elite runners that swarm onto the fields each weekend across the country the goal is just to finish the course, perhaps in a faster time that they did at their last event.  For a large portion of the non-elites, many of the obstacles aren’t even achievable on their own without assistance. 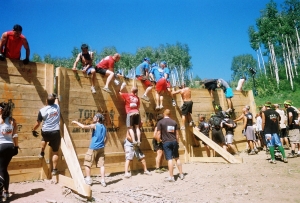 xample.  Some people can leap up, grab the top, and haul themselves over to the other side and continue the race without much apparent effort.  Others require help from others on the course.  Some get help from friends they’re running with, some get help from complete strangers.

This past weekend at a Spartan Race I saw numerous examples of teamwork like this.  Most of the examples were people who obviously know each other boosting their friends over the wall.  However, there were two examples of cooperation that stood out to me.

The first was a man in his mid-thirties, in my estimation.  I arrived at the obstacle about fifty feet behind him and noticed him struggling.  After his third try, he made it up the wall, expending considerable effort.  Instead of just continuing, he turned back to those on the ground below him and reached down his hand yelling “Who needs help?”  I watched him help a handful of people get over the wall, smiling the whole time, before he moved on.  He didn’t expect thanks.  He just saw an opportunity to help and he selflessly assisted others to accomplish what he himself had accomplished.

The second example was the polar opposite.  This was a young woman who came up to the wall in full stride into the crowd and all but demanded, “Who is going to boost me up?”  Several people were all too happy to help.  Male and female alike broke from their groups to offer this young woman the assistance she needed.  With a short “thanks” she mounted the wall and continued over without a second glance.  Could she have been nicer?  Sure.  But she got what she needed from those who could provide the assistance and briefly thanked them in an almost businesslike manner.

So I ask you – if we could translate this selfless teamwork mentality openly displayed on the muddy fields and translate that to traffic jams, the boardroom, the street corner, and global politics – what would the world look like?

The Goal of Health

Make no mistake – you see all shapes and sizes at every OCR event and mud run.  Spartan Race, BattleFrog, Atlas Race, and every other OCR on the planet are not just for the elite athlete.  The super fit and the horribly out of shape take to the muddy fields together every weekend.  What do they all have in common?  The goal of a healthier life. 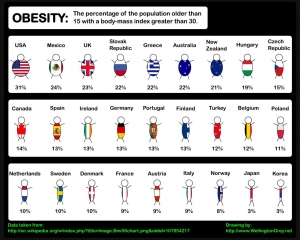 , the guy or gal on the course you see that is 50 pounds overweight generally isn’t trudging 8-10 miles through barbed wire and mud, carrying heavy objects, and attempting to climb a rope just for the free beer at the end.  They are out there with a bigger goal in mind.  They want to get off the couch and improve their quality of life and they’ve made the brave decision to get outside their comfort zone in the mud, using OCR as their vehicle for change.

Obesity is a global epidemic.  It is a contributing factor to many diseases including diabetes, cardiovascular disease, and more.  Among these are some of the leading causes of healthcare costs and contributing factors to premature death on the planet.  According to the World Health Organization (WHO), obesity has more than doubled worldwide since 1980.  There are many causes, but there are just as many ways to help combat obesity.  On their website, the WHO lists “engaging in regular physical activity” and better dietary choices as ways to combat obesity. 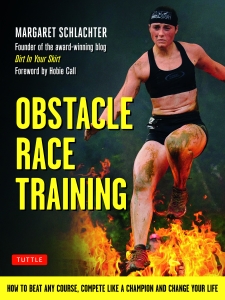 Here is how OCR plays its part in changing the world, one obstacle at a time.  Mr. & Mrs. Jones, both overweight and out of shape, are talked spur of the moment into running a local mud run this weekend by one of their “crazy friends”.  Afterwards, inspired by (1) the teamwork and camaraderie they saw on the course and (2) how much fun they had (even though they struggled), Mr. & Mrs. Jones decide to try the Rugged Maniac that is coming to town in 6 weeks.  They decide to train for it together so they will struggle less than they did last weekend.  After a couple weeks, they start to notice changes in their energy levels.  Mrs. Jones then sees online that diet is 80% of the battle when trying to lose weight and get in better shape.  They decide to make dietary changes together and a couple weeks later they see more positive changes in themselves.  Long term they miss less days of work due to illness, their healthcare costs go down, and they have less impact on the healthcare system as a whole.  And one day when they have Baby Jones, the fitness lifestyle is translated to the next generation and the impact of health is exponentially felt not just by the Joneses, but their community as well.

Spartan Race already has a global reach with races in the United States, Canada, and some international locations.  BattleFrog has expanded from the US into Canada for 2016.  The United Kingdom has numerous OCR events such as Tough Guy, Rat Race, and Men’s Health even puts on a Survival of the Fittest Race in Europe (http://www.ocreurope.com/ ).  Australia has their share of events as well (http://www.obstacleracers.com.au/ ).  The OCR World Championships are headed outside of the United States for the first time next year.

OCR is one of the fastest growing sports.  Anything that grows fast has tremendous potential for success but also potential for tragic failure as well.  We, as an OCR community need to help our sport grow at the grassroots level.  Join the Spartan or BattleFrog Field Teams.  Help promote local events.  Recruit your friends and family.  Talk to strangers in the festival area at your next race.  Follow OCR racers on Twitter, Facebook, and Instagram and share their stories. 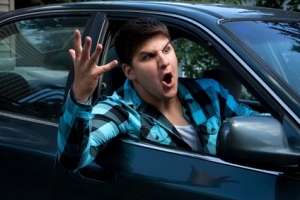 In short, we need to make the sport more mainstream.  OCR has been growing since about 2011, but far too many people still look at me like I’m crazy when I tell them about last weekend’s Spartan Race or tell them that, I write for something called Mud Run Guide.  The industry of OCR cannot grow the sport alone.  In order to make the world a better place through OCR, we need buy-in from every participant at every race on every continent.

Is this viewpoint a bit overly optimistic thinking OCR can help make the world a better place?  Maybe.  But consider this – you’re running late in rush hour traffic.  The person next to you apparently is too because they just cut you off.  Instead of raising your blood pressure getting angry, you notice a small Spartan Trifecta decal on the car’s rear window.  You remember the teamwork and friendship at your last OCR.  You then start thinking about your training for the upcoming Tough Mudder… and you can’t even remember what got you thinking about OCR, but you’re happy… and all because of obstacle course racing – your world is a better place.

0shares
Disclaimer: The viewpoints expressed by the authors do not necessarily reflect the opinions, viewpoints and official policies of Mud Run Guide LLC, or their staff. The comments posted on this Website are solely the opinions of the posters.
By Brian Tallmadge|2015-11-21T23:33:25-05:00November 20th, 2015|Op-Ed|0 Comments