As the rain poured down and temperatures reached a balmy 6 degrees, we were a little hesitant if the snow would suffice for the 2nd annual Dion Ignite the Night Snowshoe Race.  We packed a variety of outerwear and hit the road heading east about 90 minutes.  We were excited that we were finally going to meet some of our fellow racers from online forums, and this was a central meeting point that worked for 20 of us from Ottawa, Toronto, Kingston and Montreal. 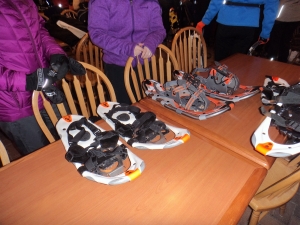 Upper Canada Village is located in Morrisburg, Ontario and borders the shoreline of Lake Ontario. The village did not disappoint with its beautiful display of Christmas lights that adorned the village, and they were kind enough to open the village for the race, so we did not have to worry about pedestrian traffic or parking.

Again this year, headlamps were mandatory to help light our way as we looped west along the shoreline and then circled our way back through the beautiful wooded terrain.

There is tons of parking, and it is convenient to come and go from the main Barn where racers can change and store their equipment safely.

Registration this year was quick and easy, and there were little to no lines for race kit pick up sorted by the last name. 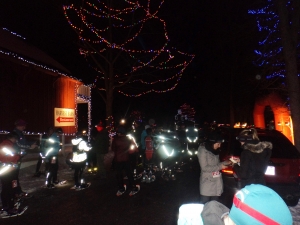 Each racer received a black fleece racing beanie that was embroidered with the Dion logo. Racers could then pick up their rented snowshoes (if required) for a $5.00 fee and then prepare for the race in a comfortable and inviting log barn.

This year the race was on time, and the start line had been moved slightly down the path.  The paths were clearly marked, and racers were told to keep the flags to their right at all times. 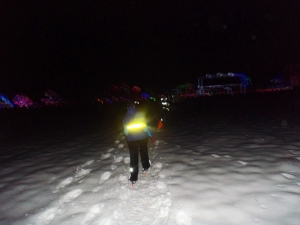 A few racers were disqualified from the event and of the 116 participants 111 finished the course.  There were two options for racers a 5K and a 10K loop and the course flows nicely amongst the woods and buildings guiding racers back to the finish line. This is not an entirely flat course and provided enough challenge to racers with ample snow even though there had been a rise in temperature up to 6 degrees and rain over the past few days.

The finish line was well marked with the traditional Running Room Arch and the volunteers manually tracked your bib number and time for reference.  The well-lit timing clock inspired racers to push that extra little bit to improve their overall time.

At the end of the race, participants were treated to a buffet-style meal that included two types of homemade chili, chips, nachos, salsa, bananas, oranges, homemade cupcakes/cookies, juice and water (a gourmet feast).

A group called ‘Beyond 21’ provided the food and were a local charity which”…enable adults with developmental disabilities to live connected, respected, and contributing to our community.”

This year Beyond 21 switched from last year’s ceramic snowflake to a small medal made in wood displayed nicely on thin ribbons- each medal was in the shape of a rabbit or snowshoe perfectly suited for this event.  They even had a table where you could customize your medal with date, locate, distance, etc….

Once the meal was over the coveted awards and door prize tradition began. 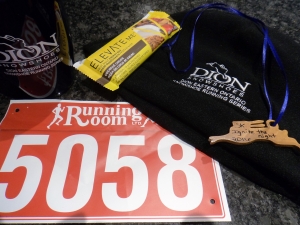 This race had many great door prizes and gave out medals for the following categories:

The medals received by the top performers were again custom made by Upper Canada Village blacksmiths and were greatly appreciated by the winners for their creativity.

For this being their second annual event, it has significantly improved over last year for flow, pace and keeping racers engaged from start to finish.

Thank you to Gilles, Derrick and their volunteers for their hard work putting together this event!