BattleFrog Race Series kicked off the 2016 OCR Season in the United States over the weekend with their first race of the season outside San Diego, California. While the east coast was being hammered by Winter Storm Jonas, California enjoyed a brisk Saturday morning in which athletes from all over the country lined up to take on the first west coast BattleFrog.

The morning started with the elite athletes toeing the line. One aspect of the race was distinctly different than BattleFrog Races of the past, instead of Ryan Atkins toeing the line, he stepped into his role as race director laying out the rules for the elite competitors over the weekend. We asked Atkins about the course he said,

“The course in San Diego was a joint effort, with Chris [Beard] Acord doing the initial design, and myself coming in and making several changes. Ultimately my title was Race Director. I wanted a course that was challenging to the “elites” yet still fun for the general participant. Putting on the RD hat was a fun, challenging and rewarding experience. I never thought I'd get so many people personally thanking me, just for doing my job! You are welcome.”

Not to worry, Atkins hasn't hung up his racing shoes altogether, both he and teammate Marco Bedard will be designing and directing some of the BattleFrog races this season, including the upcoming 24-hour BattleFrog in Florida. Atkins is slated to run the BattleFrog race in San Francisco at the end of February. More about the two race directing. 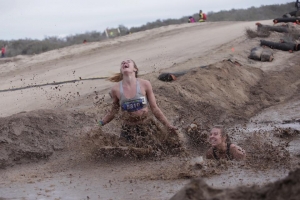 With Atkins assuming his new role for this race it opened the door for new athletes to take the top spot at BattleFrog San Diego. In the men's race, it was Victor Alexy who would claim the top of the podium with a time of 1:38:35. In second place would be Ian Hosek with a time of 1:40:09 and coming in less than a 1/100 of a second later Glenn Racz would finish in third. See the MRG exclusive video here of their finish! In fourth place was Daniel Valazquez with a time of 1:41:14. Fifth place would go to Mark Batres in 1:44:56.

In the women's race, BattleFrog Pro-Team athlete Corinna Coffin started out her season strong with a huge win over the rest of the women's field. She clocked in at 2:02:34. In second place was Conquer the Gauntlet Pro-Team athlete Amy Pajcic at 2:28:14 and in third place was Maggi Thorne at 2:33:54. In fourth was Laura Messner with a time of 2:50:39 and Shaun Provost rounded out the top five with a time of 2:52:42.