South Africa’s OCR season for 2016 has now officially begun with the start of the Warrior Races! The first Warrior Race was this weekend with almost 7000 participants. We have had a few earlier events, but those were mostly attended by Elite athletes and those in the know, and were more warm ups than true events. Sunday was the race day set aside specifically by the organisers for Elite races, which was a pleasant change from previous Warrior races. It built camaraderie and spirits for all the Elite athletes to complete together on the same day, and have prize giving together as a “family”. In the past the Elite batches were fractured over the weekend with scattered prize giving events. The growth of OCR in South Africa was evident in this change in the biggest OCR race nationally, as it shows how the races’ organisation is improving, in turn allowing OCR to become a professional and serious sport in South Africa, the result was evident in the athletes attitudes and enjoyment of the race.

The Black Ops Elite starting line was a mass of shifting men and women under the early morning African sun, as the athletes stretched, fidgeted, and slapped each other’s shoulders with anticipation. The track would be completely new and they were eager to see the obstacles. Black Ops are the most advanced athletes, and they faced a daunting 15km route with 30 obstacles including the infamous Mud Monster, Breaking Point, and Tower of Rage. Their first obstacle however, was the greatest of all: a massive, muscled giant of a man in cargo pants and army boots who was bellowing in their faces. His name? Warrior Ric. This guy stands in front of a group of the fittest athletes around and you can see he loves the sport, loves the athletes, and loves his job! And they love him back. He got the Black Op Elite athletes bellowing and clapping and ready to give their best on the race, and he would do exactly the same with the newbies to the sport much later in the day when their batches started. 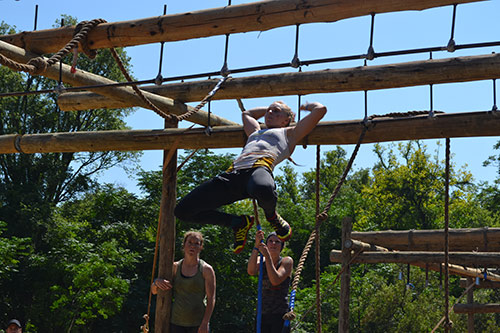 After a countdown by the spectators, the Elite athletes rushed down the trail en masse, accompanied by a cloud of smoke from the new smoke machine! The trail was very slippery and wet, due to the recent rain the night before, although this day was sunny and clear. Good gear was essential here, as without shoes with grip the athletes would have been on their backsides pretty quickly, not an auspicious start to a race as badass as the Warrior. Of course, the shoes counted later too, as the athletes made their way through most of the track and got to the Mud Monster, Warrior’s most infamous obstacle for Elite and non-Elite athletes alike. Here the athletes start out by wading through a pit of waist deep mud, followed by the first mound of slippery clay they need to climb. On the other side of the mound is a deeper pool that can be slid into or jumped into, depending on your flair for drama and energy levels at that point. This is duplicated a couple more times, with some mounds slightly more steep than the first, and by the time the athletes get to the last mound they are covered up to their elbows in a gelatinous mud that only South African earth can produce. Preceding these mounds is a stretch of mud so deep and so treacherous that stepping into it sinks one down to at least their knees. The only way to get through without losing a shoe (at best) is a slimy leopard crawl that truly brings the athletes down to earth! As the athletes squelch on their way from the Mud Monster, they will be able to wash some of the mud off at The Mamba, warrior’s massive slide, before crawling through some suffocating pipes on their way to the biggest game changer of all: Breaking Point.

By now the day was very hot, and the Mud Monster and following water obstacles are a pleasant reprieve from the sun and sweat, but all of that is forgotten as the athletes faced planks, flying monkeys, and other grip-focused obstacles that are really challenging after the mud and water coating the athlete’s hands. Breaking Point was really a turning point for the Black Opps Elite race results, changing the order of winners almost completely for both the men and women!  Here the athletes really had to show their grip strength and upper body strength, but the mental challenge was as great. Woman’s Elite athlete Hanneké Dannhauser was stuck on Breaking Point for over six hours, refusing to give in and let the obstacle beat her, such was the mental challenge issued by this obstacle, as well as Hanneke’s own determination and stubbornness. As one of SA’s top athletes, she would have come first if not for the bend in the road that Breaking Point was for her, but we salute her courage. The same shuffling up of the potential winners happened in the men’s results at Breaking Point, and those with great mental fortitude as well as physical prowess were those that came through, jumped triumphantly off the Tower of Rage, and finished their race. 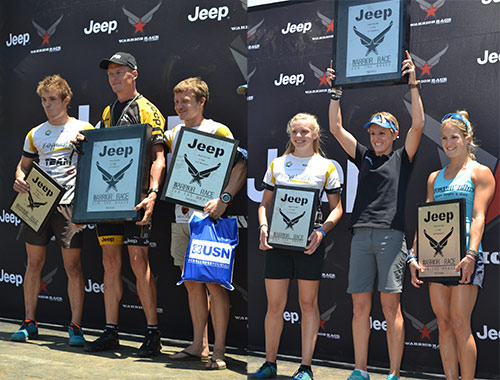 All in all, Warrior number one was an excellent start to 2016 and an exciting glimpse of everything still to come in South Africa’s OCR this year. The obstacles also showed the growth of OCR in South Africa through their improved build quality. No more splinters from roughly thrown together poles or cuts from rough edges to plague the athletes; these obstacles showed forethought and professionalism that had previously been lacking at Warrior Races. Rookie and Commando class winners stood to win prize money, a first for Warrior races, and also got trophies for the first time. Making an OCR Race worth an athlete’s while, both through the excellence of the course as well as through prizes is really what will boost OCR in South Africa and prove that the sport is more than just a flash in the pan: it’s a sport that won’t stop growing!