Many of us are content with completing a 5k; then again Spartan Race founder Joe De Sena isn't your average guy.

“Breathing is extremely difficult, it's impossible to describe the amount of smog in the air and how the coal's soot coats your mouth with each breath. My guide told me over 20 million new cars are sold in China every year, and it seems almost double that many are crammed into every street in Beijing at all times of the day, creating an almost unending traffic jam.”

Lifelong quests usually don't begin from a dark, gridlocked, bustling metropolis. In reality, this one started a long time before Joe and his family set foot in China. Beijing's proximity to the most famous sections of the Great Wall of China, however, make it the perfect jump-off point for Joe's greatest challenge yet: To walk, jog, hike, run, and climb one of the 7 Man-Made Wonders of the World from start to finish.

Over 5000 kilometers. Well more than 1 million steps. 1 Quest: To Conquer the Great Wall

Joe's accomplishments in both an endurance or entrepreneurial capacity are the stuff of legend; this is a man who ran the entire 300+ mile Idatarod – on foot with no dogs, who completed an Ironman and Badwater Ultramarathon in the same week, a Wall Street executive who traded suits for boots and built Spartan Race from the mud up.

A staple at Spartan Races all over the globe, De Sena doesn't shy away from making an appearance at races, sharing every element of his life and philosophy as he did in his New York Times bestselling book Spartan Up!, or walking the walk – no matter where on the planet the journey will take him. As accepted as it is amongst Joe's friends, family, and co-workers for him to drop off the radar for a little while, an extended absence of several months with little to no contact from one of the most plugged-in guys in the sport of OCR can be somewhat jarring. For the CEO of a 100 million-dollar company to disappear altogether on the other side of the globe is an actuary's worst nightmare. 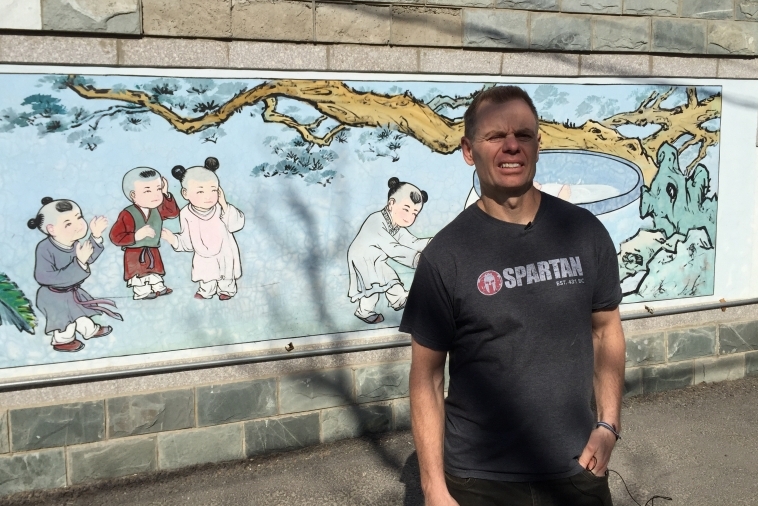 “…we're either creating the next Presidents of the United States or serial killers.”

The dreams of the Great Wall started decades ago, the seeds for this journey were beginning to sprout in 2014. Shortly after the birth of their fourth child, I visited Joe at his home in Vermont to discuss writing a book. Strangely, when I showed up I couldn't find him on the grounds or in the farmhouse, but heard some noises and upon further investigation made my way to the basement and witnessed Joe's elementary school-aged kids working on tumbles, kicks, and takedowns with a martial arts instructor. Not wanting to disturb their intense training – both his son and daughter were extremely focused on the clipped, stern orders of the sensei – I worked my way back out to the barn where some employees in Spartan shirts were loading trucks.

“Nope, haven't seen him – have you tried the cabins? That's where he was a few hours ago” 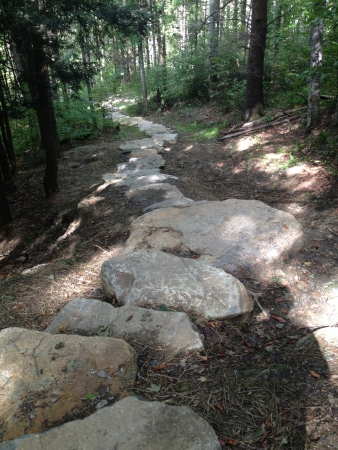 After several fruitless checks around various structures, I found myself at the foot of a series of stone steps carved into the hillside leading up into the woods. I knew what they were, and who created them. Even though I was already a half hour past out meeting – which had a limited window because Joe had an appearance on NBC in Boston later that evening – there was no resisting the desire to climb those steps dragged, smashed, and placed by the hands of Death Race participants only a month earlier; some of their crude tools were still visible off the side of the trail. Thousands of pounds of  stone now embedded in the side of a mountain dividing the picturesque beauty of the wedding hall surrounded by acres of lush farmland and the dark unknown. Little did I know this was the beginning of Joe's own “Great Wall.”

After an hour of searching the mountain, my cell phone rang:

“Hey, where are you? I'm at the farmhouse. Get your ass down here, I've got to leave in a few minutes.”

By the time we connected, the car service had already shown up and we only had time for one topic; our kids. I mentioned my daughter was about the same age as his, and how much ass I witnessed his daughter kicking in the basement. My little girl played with Barbie dolls and watched The Backyardigans. Joe's daughter effortless threw spinning back kicks and also watched The Backyardigans – but only in Mandarin Chinese.

“My deepest desire is for my kids to train in martial arts all over the world in different styles from different masters. Learning Mandarin is as important as the kung fu training they are doing now. But who knows, we're either creating the next Presidents of the United States or serial killers. I guess we'll find out.”

He never mentioned the Great Wall, stone by stone he was already in the process of building it.

“In some areas, the wall is beautiful; the stones you walk on and virtually every surface you touch is made out of bricks that were fired in a kiln. The structural ones were quarried, and the base is basically mounds of packed earth, but the wall becomes a sculpture on the surface. In other areas, the Great Wall is nothing more than a pile of rubble. Some parts have completely disintegrated and you'd never even know the wall was there.”

It may be 3 weeks or a month, Joe's time on the wall has changed him. Visibly, he looks tired and wearier than I've ever seen him. The journey makes the man, but it can also drain the desire. Recently a study was published stating that when driven individuals complete an arduous task or cross an item off their bucket list, they are prone to depression and a hollow feeling once they have completed their pursuit. De Sena is the type of adventurer who follows Shackleton's true north, but once he reaches the pole, what's next?

I've never seen Joe visibly drained before, and I don't know anyone who's heard him say “I'm tired,” so I wasn't equipped when he mumbled it to me on the phone earlier in his journey. He sent a video (posted here on Facebook) from his trip, and he shared another showing the rock and hut that was his bed for the night.

“I'm tired, it feels like I've been pushing everyone and everything in my life too hard. From my kids to myself, and every Spartan racer. Death Race was too hard for most people, Agoge is one of the most difficult challenges on the planet. Everything keeps getting tougher, including Spartan Race. I think we've reached what Gladwell would call a Tipping Point – better yet, what Godin called The Dip; too much is too much. This journey made me realize I'm going to focus on a new challenge that's easier and more accessible for everyone, Spartan Light.”

Over and Through the Wall

Mentally, he's focused on parts of the wall – like the turrets that were designed to provide communication and defensive fortifications, yet were engineered to be confusing to any interlopers who breached the wall – and he's also stumbled on elements that amaze him far more. A farmer who ferments garlic, one of Joe's favorite foods, and how the process turns it black and pungent. He was very excited to describe a school he found during his trek, one who teaches in the traditional Chinese culture that was nearly wiped out by Emperor Qin Shi Huang. Lessons include Confucius, Kung Fu, and Tai Chi. They learn and train outside, the name of their school Tian Zang Yuan means “Innocent Garden,” and while it seems a million miles away from a farm house in Pittsfield, Vermont, it seems this is a place he was meant to find, the one he's been searching for all along.

“The wall is the greatest obstacle in our sport, and this is the greatest one in the world. I've heard it's the only man-made structure visible from the moon, but I've never been to the moon to verify it.”

Joe's no fool, he knows you can't see a structure that's only 30 feet wide at its largest point from a quarter of a million miles away, but he was merely turning a phrase; the wall is a feat of construction that will never again come to pass in the time of men.

“Three hundred Death Racers took days of backbreaking labor to move thousands of pounds of stone into position back on the farm, this construction was millions of workers moving billions of tons of stone over centuries. It puts a lot of what we do as Spartans – as humans – into perspective.”

Death and a New Beginning.

When the Death Race ended, a little piece of Joe died. He never came out and said it, but I'm confident it's true. Joe wants to teach, train, sculpt humans in the most hands-on way. Spartan UP! may have become a bestseller, but the success is hollow if he's not there to see it in action. Agoge was created as the next evolution of Death Race, but that's in the hands of very capable staff in the US, and Joe now lives in China. He needs to get his hands dirty molding the clay, and shaping athletes into leaders. He needs the next challenge to be with him.

He wants the next challenge to be Agoge on that wall, you know, the Great one in China.