Ray Tincher took on Berserkr Games over the weekend. Read more about his account of this unique obstacle race.

Berserkr Games is not your typical OCR. This race takes place annually in mid-March, in Kingsville, TX at Rifles Only.  First of all, you take a thrilling helicopter ride around the property before dropping into a chilly pond to start the race.  The course is a flat 2.7 miles, which you can do up to four laps depending on which of the four race distances you are running.  The cost does not change whether you go for 2.7 miles or up to 10.8 miles.  Although the terrain is flat, the entire course is sandy loam that has been tilled to add an element of difficulty.  The entire course is on an open piece of land (think shooting range) with almost no shade, so make sure to bring sunscreen!  The race staff does encourage teamwork but do not require racers to run with a team. 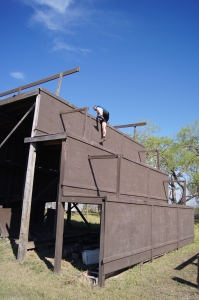 Having never ridden in a helicopter, I did not know what to expect when I signed up for this race.  The pilot takes two at a time on a thrilling ride that I can only compare to being on a roller coaster, before stopping to hover over the chilly pond.  Needless to say, my heart was pumping, and my adrenaline was going before the race even started.  Then the race director turns from the cockpit and says step out on the landing skids and wait for me to count to three before taking the plunge.  3….2….1….and the race starts with a SPLASH! 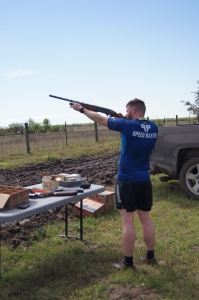 The short course is chocked full of obstacles, and you will never run more than 1/4 mile before hitting the next obstacle.  After dropping into the pond and swimming 25 yards to shore, you start running in thick sandy loam to the first obstacle which is a muddy crawl under the cargo net.  From there, you hit a 12’ vertical wall with a cargo net decline before coming to the mud trenches.  Next, come monkey bars and 12’ deep holes with rope assist before coming to the first shooting obstacle, which is the shotgun clay pigeon shoot.  Being 12 feet down in a mud filled pit, where you can only see the sky above is a bit of a mind game.  The only thing allowing you to keep your sanity was the rope assist on the other side of the pit.

Afterward, it is over some tire walls and on to an ammo case carry over a large wooden structure shaped like huge steps.  The next obstacle is a crawl before hitting a rope traverse.  Then you encounter a unique obstacle called the rat trap, which is similar to a vertical maze.  Before climbing the hall of walls (four wooden walls), you have to complete a short rope climb.  From there, you encounter the over-under logs and the concrete pipe barriers before coming to the second shooting obstacle which is rifle target practice.  From there it is a short run to the tire jungle and more mud trenches before coming to the lap/finish line.

The things I liked about this race were the quantity and variety of obstacles available on the short course, and 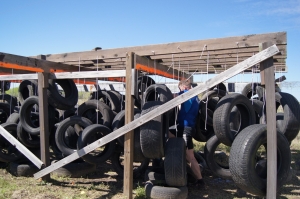 the race was rather small, so there were no bottlenecks at any of the obstacles.  The race director was extremely positive toward all racers regardless of athletic ability, and he spent the entire day taking photos and cheering everyone on.  This race is unlike any nationally known OCR due to the uniqueness of the start, but I could compare the difficulty of the obstacles to something like Gladiator Rock n’ Run.  The aspects of the race that I enjoyed more than other races were the helicopter drop start and getting to shoot a shotgun and a rifle.  I also really like the fact that each racer could choose their race distance.  The only aspect I wasn’t terribly fond of was the fact that racers could skip obstacles without a penalty, but the race director wants this to be a fun experience for everyone. 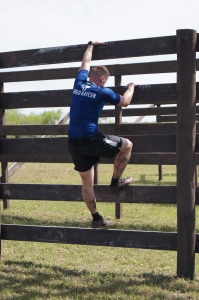 The cost of the race appears expensive at first, but your money also pays for ammunition, lunch and a beverage of your choice.  Just in case you are not familiar with firearms, there are instructors at each station to assist you with loading ammunition and giving you pointers, etc.  The environment is a neat experience as well since all the staff and racers were so positive and encouraged the entire time I was on course.  Proceeds from the race benefit Movement 22, which was formed due to the suicide rate of former military members.  Overall I would rate this race a 4 out of 5. The only reason I do not give it a 5 out of 5 is because racers are allowed to skip any obstacle they are uncomfortable with attempting without any penalty. Also, there are no prizes for the competitive racers.  Despite these elements, I would still highly recommend this race if you want to try something different, and have a blast while doing it!

About the Author: Ray Tincher