March 12, just northwest of Houston, was the first time Spartan Race hit any city in Texas other than Burnet and Glen Rose. Spirits were high, as was the sun and the flood gauge. Nature decided to throw everything possible at the Spartan build crew. That means three things in Texas: rain, ants and snakes. Couple those in with a well laid out course and some great obstacle placement, you have yourself a great race for the first heats, and a progressively more dilapidated course the later you ran. 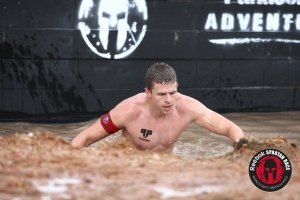 the evening before and toured the venue, talked to Leah, Missy and Jason from the build/design crew about what we had in store the next day. Prior to that, we were instructed to buy some rubber boots before even getting out there in the first place. Even driving in, one of the pieces of heavy machinery was stuck in the mud by the road… ominous. Once my group arrived and spoke to everyone, we quickly understood what was going to make this race challenging. It wasn’t going to be the flat farmland course. The obstacles are the ones we all know, it was the fact that already, the night before the race, we were sinking down about 3-7 inches into the much in the festival and race track area… and no one had really even been there yet. 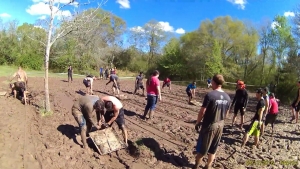 Begin the next day, a huge storm is on the horizon, and it stays away! I gave a burnt offering of peeps and Cadbury eggs the night before; I claim full responsibility for the rain staying away, just sayin’. With the ground saturated, the on-site parking was no long viable for the masses, it would be Glen Rose Day one all over again. I still have flashbacks to that parking lot. So most participants were bused in from the local high school stadium. There were quite a few people complaining about this, not realizing their 2-wheel drive Toyota Camry would be slogged down and they’d never get in or leave if Spartan didn’t do this, so major props for getting this done for race day.  The start was delayed about 30 minutes to get the rest of the volunteers and racers on site for the elite heat. At 8am, we were off. 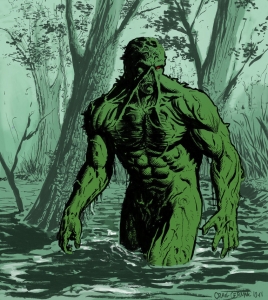 How can I possibly use enough adjectives to describe the state of the course? I really can’t. It was the soggiest, slushiest, most energy draining slog ever. I made a conscious effort, the entire race, to land feet under, mid-strike as best I could to spread my weight over the most surface area possible, and it did nothing. It didn’t matter where we were, your feet were going about three to four inches deep with every step, with one exception. For the first mile or so, there was what I can only assume to be a marathon runner who looked to be sub 100 pounds. This guy was just gliding over the trails like they were dry… so much hatred.

After a few standard start off obstacles, we got to the barbed wire crawl. I stayed left, and was required for it. How you ask? Remember me mentioning fire ants earlier? Oh, I just said ants. Well, I meant fire ants. The meanest bitey-ist fire ants ever. The poor guys on the right were crawling and rolling through an entire colony. The ground was too wet, to all the ants throughout the entire venue, were just rising out onto anyone unlucky enough to enter their patches. It got so bad the barbed wire crawl was shut down after the women’s elite heat. There were a few snakes up and about during the race (Sorry Sue), they just did a good job of staying away from the racers.

The real fun was after the elite heat. The course… changed. It went from a soggy run to a muddy soup where at any point you could fall into a random deep hole and emerge as Swamp Thing. It was completely unmanageable. There was no part of the course from even 10am on that was even run-able. It was just a slow arduous mud slog for the rest of the day. That being said, the majority of participants still had a great time. Everything was against this race. New location, basic terrain, horrendous weather, nature that wanted to eat us all, and we still had a blast. My hats off to Spartan for managing everything in stride and showing their professionalism in the face of the deterrents that constantly came in their way.

Thank you to Alfanso Rex Lozano for the video clip.